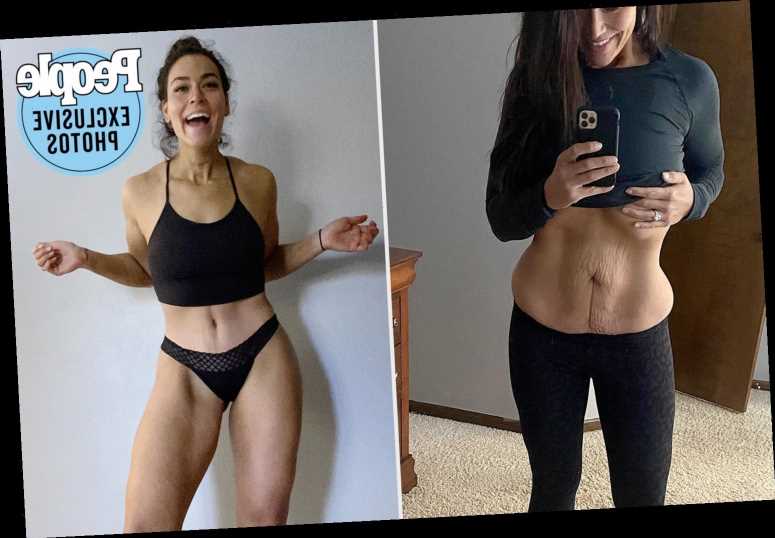 For years, Erica Lugo has dealt with the excess skin that stuck around after losing 160 lbs. by stuffing it into compression pants and covering the inevitable rashes in Vaseline. But now, five weeks after she had her loose skin removed in a full tummy tuck, Lugo is stunned by her body.

“I don’t even feel like this is my body,” the Biggest Loser trainer, 34, tells PEOPLE. “I didn’t even know I could have a body like this.”

On Sept. 21, plastic surgeons removed 8½ lbs. of excess skin from Lugo’s stomach, and she’s been recovering at home in Ohio for the last month. It hasn’t been easy — the first few weeks her skin felt extremely tight, and she had to stay hunched over for most of the day. She also had four different drains attached to the incision to filter out blood and excess fluid, which are finally out.

These days, she feels “good, and not super tight anymore.” Lugo deals with swelling throughout the day, but every day is a major improvement. “I feel like every single week my waist gets smaller and my swelling goes down and the shape is coming through,” she says.

Lugo even worked out for the first time on Monday, though she had to wear two compression garments and her stomach binder to support the incision.

The biggest moment since Lugo’s surgery, though, was a date night with her husband Danny McGeady this past weekend when she wore a tight, white dress. “I never would have worn anything like that before, because anything tight before would show all my loose skin rolls, and the rolls in the front and the back and on my hips,” she says. “I kind of cried looking at the photo because this is a body I've always knew I could achieve if I just got the loose skin removed.”

Lugo says that “for the first time,” she’s not just looking for clothes that will hold in her loose skin and stop it from jumping out during workouts.

McGeady has also noticed a major change in how Lugo carries herself.

“My husband has even said, ‘You’re just so much more confident in the way you carry yourself,’ ” Lugo recounts. “He said, ‘You know, normally when you would get out the shower you would make sure you had on two towels to cover up, and now you don't even care about grabbing the towel right away. If you're changing your sweaty gym clothes, you don't turn around like you used to.’ He said that my overall demeanor seems a lot happier and just carefree.

“I thought that was really cool that he noticed my personality kind of changing to feeling more relaxed about myself,” Lugo says.

And it’s something she’s noticing in herself, too.

“I feel like I worked so hard for this body and now I can actually enjoy it.”