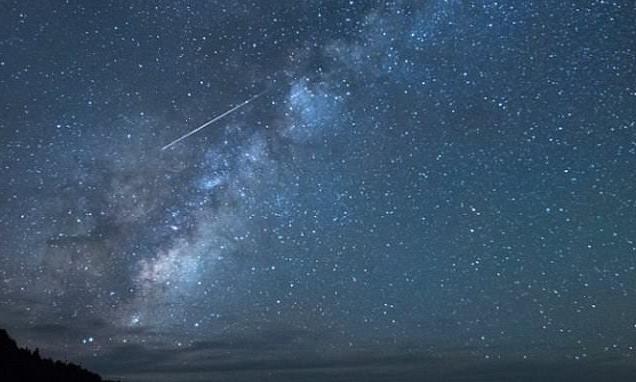 Look up this week! Eta Aquarids Meteor Shower to peak on Thursday with up to 20 shooting stars per hour flying across the UK night sky

Up to 20 shooting stars per hour will light up the night sky this week as the Eta Aquarids meteor shower reaches its peak on Thursday night.

The show is the result of the Earth flying through a cloud of debris left behind by Halley’s Comet during its last journey through the inner solar system in 1986.

The show will reach its peak on Thursday May 6 but meteors will be clearly visible from today and through to the end of the week, astronomers explain.

NASA said that to watch the shower you should ‘get a comfy chair’ and be prepared to sit outside for hours — but you won’t need binoculars or a telescope.

This shower is best viewed in the southern hemisphere, but should be visible from most places on Earth, although the further north you are the fewer rocks you’ll see.

The next meteor shower to light up the sky will be the Eta Aquariids and it will see dozens of shooting stars per hour, reaching its peak on Thursday

The show will reach its peak on Thursday May 6 but meteors will be clearly visible in the days before and after the peak, and in drabs to the end of the month

HOW TO SEE THE METEOR SHOWER

This year, the shower will peak on the evening of May 5.

For people in mid to northern latitudes, the radiant won’t be very high in the sky, so you should be able to spot the meteors on the southern horizon.

Observers in the southern hemisphere will have the best view, and will see the shower’s radiant in the north.

For the best viewing experience find an area away from city or street lights.

‘Lie flat on your back with your feet facing east and look up, taking in as much of the sky as possible.

‘After about 30 minutes in the dark, your eyes will adapt and you will begin to see meteors.

‘Be patient – the show will last until dawn, so you have plenty of time to catch a glimpse.’

NASA says the best way to watch the meteor shower is not to use equipment, but instead find a dark area with limited light pollution and look up.

The Eta Aquariids are named after the constellation Aquarius as that is where they appear to fall from every April and May – particularly the star Eta Aquarii.

For people in mid to northern latitudes, the radiant won’t be very high in the sky, so you should be able to spot the meteors on the southern horizon.

Observers in the southern hemisphere will have the best view, and will see the shower’s radiant in the north.

In a post on its website, NASA said: ‘The constellation of Aquarius – home to the radiant of the Eta Aquarids – is higher up in the sky in the Southern Hemisphere than it is in the Northern Hemisphere.

‘In the Northern Hemisphere, Eta Aquarid meteors can more often be seen as “earthgrazers.”‘

‘Earthgrazers are long meteors that appear to skim the surface of the Earth at the horizon.’

‘For the best conditions, you want to find a safe location away from street lights and other sources of light pollution,’ according to the Royal Museums Greenwich.

The Moon will be in its waning crescent phase during the peak of the shower so should be dull enough not to impact on the show.

When out watching them don’t just stare in on direction as you might miss the brightest and most impressive shooting stars off to the side.

The best way to watch for them, according to NASA, is to lie on your back and look straight up as it gives you the widest view of the sky without getting neck strain.

Meteors are pieces of debris that enter the atmosphere at speeds of up to 148,000 miles per hour – as they do so they vaporise and cause streaks of light.

They are the flashes of dust grains burning in the atmosphere left behind as the Earth passes the path of a comet.

That’s the reason they appear on certain dates and return annually – as these comets are on an orbit and leave debris in certain parts of space.

The show will reach its peak on Thursday May 6 but meteors will be clearly visible in the days before and after the peak, and in drabs to the end of the month

Renowned for their speed, the meteors over the next week will be entering the Earth’s atmosphere and will leave a trail of glowing debris following them.

They’re best viewed in Australia because they rise to about 50 degrees in the sky, which is the best angle to view them from.

Physicist Clare Kenyon from the University of Melbourne told the ABC the angle is perfect because it’s above the horizon and has less of a chance hiding behind trees.

The next major meteor shower will be the Perseids in August with over 100 shooting stars per hour at their peak and showing as bright, fast meteors.

Eta Aqauriids don’t produce as many stars per hour as the Perseids but astronomers say they’ll be just as bright if not brighter.

According to Royal Museums Greenwich there is no specific peak for the Eta Aquariids, they tend to just plateau at a good rate over a week up to May 7.

It is one of two showers created by the debris from Halley’s Comet – the other is the Orionid meteor shower in October with 25 shooting stars per hour.

Explained: The difference between an asteroid, meteorite and other space rocks

An asteroid is a large chunk of rock left over from collisions or the early solar system. Most are located between Mars and Jupiter in the Main Belt.

A comet is a rock covered in ice, methane and other compounds. Their orbits take them much further out of the solar system.

A meteor is what astronomers call a flash of light in the atmosphere when debris burns up.

This debris itself is known as a meteoroid. Most are so small they are vapourised in the atmosphere.

If any of this meteoroid makes it to Earth, it is called a meteorite.

Meteors, meteoroids and meteorites normally originate from asteroids and comets.

For example, if Earth passes through the tail of a comet, much of the debris burns up in the atmosphere, forming a meteor shower.