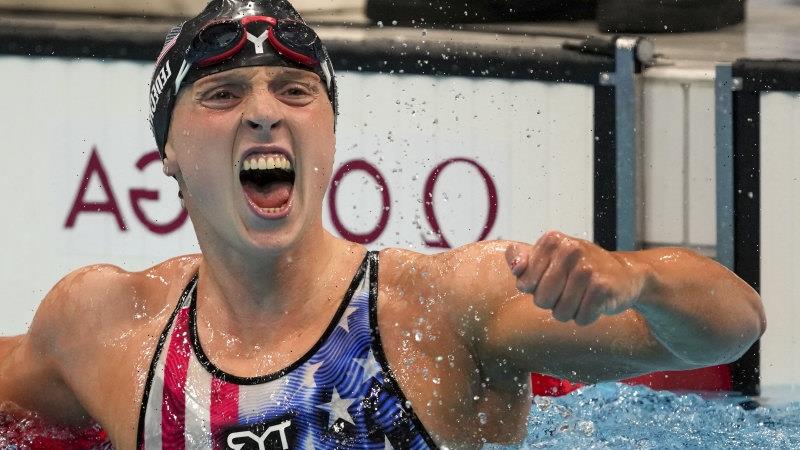 Katie Ledecky is not the only person on earth who thought it was ridiculous and stupid and sexist that women did not swim the 1500 metres freestyle at the Olympic Games until now. But there could be no better swimmer to bury that particular inequality.

Aside from being one of the greatest swimmers of all time, Ledecky is tough beyond imagination. Late on Monday night, while the outside world was still catching its breath after Ledecky’s epic eight-lap duel with Ariarne Titmus, Ledecky was in the pool. Swimming. Motoring through 30 laps to qualify for the 1500m final. Between times, she had also qualified for the 200m freestyle final. 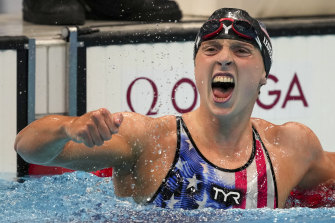 Tough? By Wednesday morning, the champion faced a new and unfamiliar challenge. In the 200m, she languished in an unwonted, unwanted, fifth place. Titmus-Ledecky II had been a walkover. Ledecky’s legacy as a swimmer is beyond question, but this was a blow to her pride.

She had expected to be going to a medal ceremony. The plan, she said, was that “the better my 200 was, the better my mile would be, I’d have the adrenalin”.

Instead, she wasn’t going to a medal ceremony and she wasn’t feeling any adrenalin. On the stairs leading to the warm-down pool, she bumped into her coach, Greg Meehan, who said to her, “Let it sit for a second. Be angry if you want. Let it fuel you for the 1500”.

Ledecky dived into the warm-down pool and tried to forget Titmus, forget finishing fifth, and “treat the 1500 as if that was my only race”. She would have been stressed rushing from the 200m medal ceremony to her preparation for the 1500m, so she took her time in the warm-down pool. There, she searched inside for inspiration, and thought, as she often does in these moments, of her grandparents.

Ledecky’s two grandfathers died some years ago. Her maternal grandfather, Edward “Bud” Hagen, was a doctor in the remote town of Williston, North Dakota. After the drowning deaths of several local young children, Hagen devoted himself to advancing water safety. As a local councillor, he oversaw the construction of Williston’s first swimming pool, which was named after him, as was its replacement which Ledecky christened seven years ago. Ledecky was named after Bud’s wife Kathleen.

Her paternal grandfather, Dr Jaromir Ledecky, was a post-war Czech immigrant who married Berta Greenwald, a poet and short story writer who translated for Albert Einstein and has a writing fellowship in her name at Harvard University. She, and Kathleen Hagen, are still alive and were watching Ledecky from the USA.

After thinking about those four people, Ledecky was ready to swim again. She was an unbackable favourite for the 1500m, but her 200m time was two seconds off her best and she had clearly ceded her middle-distance titles to Australia’s Titmus. Now, in the “mile” as she calls it, she was racing against ghosts: this is the race of Boy Charlton, Murray Rose and Jon Konrads, Kieren Perkins and Grant Hackett, an event close to Australian hearts. Ledecky had no Titmus from Australia in this race, only the outsiders Kiah Melverton and Maddy Gough.

Her main rivals were fellow American Erica Sullivan and Germany’s Sarah Kohler. Ledecky, whose trademark over the past three Olympics has been to burn off her opponents early, put half a bodylength in the field within the first half lap. After two laps she led by about three metres, and for the rest of the race she controlled and maintained this lead, not racing for a time, just a gold medal. Which, after losing her Olympic crowns in the 200m and 400m to Titmus, Ledecky really wanted: not for her own glory but for what it could give others. 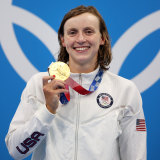 “I’ve gone to children’s hospitals and met wounded warriors, and seeing their faces light up when they see the gold medal, that means more to me than anything, the ability to put a smile on people’s faces,” she said, becoming emotional again. “I wanted to win another gold medal to get that opportunity again. I don’t want anyone to feel sorry for me and think silver is a disappointment. With so many people truly struggling, it’s a privilege to be at an Olympics in the middle of a pandemic. I’m lucky to be here.”

Never miss a medal or great sporting moment with our Olympic update emailed daily. Sign up for our Sport newsletter here.