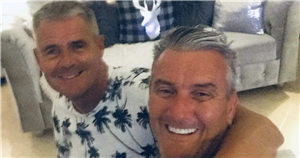 But what else is there to learn about the caravan besties? Well, the best friends are from Hull and film from Lee’s caravan in Patrington Haven caravan park.

Fans were shocked to learn that the place they film in is actually home to Lee rather than Jenny, 64, as most viewers had assumed.

While Lee’s job is unknown, Gogglebox stars get paid £1,500 a month per family, according to The Sun. Meanwhile, we do know that Jenny used to work as a pub landlady, which is how she originally met Lee who was one of her regulars.

Jenny told Ireland’s Big Issue Magazine: “Lee was a customer at my pub, The Crown Inn in Paull.

Get exclusive celebrity stories and fabulous photoshoots straight to your inbox with OK's daily newsletter. You can sign up at the top of the page.

“He became a regular in 1994 and used to come in pretty much every night with his partner and we were friends from the off. We’ve been best friends ever since.”

The two immediately became inseparable, and often go on holiday together, usually to Cyprus to visit Lee’s partner, Steve. Here's everything you need to know about Lee's partner…

Lee has been with his partner Steve Mail for 27 years and we've seen the occasional peek of the pair together in the past.

Steve lives in Cyprus which has meant that the pair have been separated during the pandemic.

However, recently Lee's partner Steve shared a string of photos of the sweet couple together and the Gogglebox favourite looks completely different in the photos.

The reality star sported a faint moustache and a plaid shirt as he coyly flashed a smile for the image taken during a night out almost three decades ago.

Lee and Steve appeared to be absolutely besotted as they cosied up with their arms casually swung around each other's shoulders.

Proving that their romance had stood the test of time, Steve wrote in the caption: "27 years younger. #alifeofriley."

Even when the lovebirds were separated during the height of the pandemic due to Lee's filming commitments, Steve continued to gush about the longevity of their romance.

Back in November, he shared another rare throwback image of himself and Lee alongside a current picture of the two of them.

"How it started. How it's going," he enthused in the caption, complete with love heart emojis.

Meanwhile, Jenny has been married to her husband Ray who prefers to stay private and has never appeared on the show.

Jenny and Lee joined the fourth series of the show back in 2014 after Jenny was approached by two Channel 4 researchers at Beverley Races Ladies’ Day.

Lee wasn’t sold on the idea at first, telling The Hull Daily Mail: “To be honest and I didn’t want to do it.

"I’d say it took her about an hour and a half to talk me into it – about as long as it took me to get me out of bed.”

The best friends say they’ve never had an argument, mainly because they are too busy making each other laugh.

“I don’t think we’ve ever had an argument. We’re too placid to argue. She makes me laugh too much for me to ever fall out with her,” Lee told his local paper.