A furious political row has deepened divisions over the national plan to ease lockdowns after federal ministers slammed a “scaremongering” claim from Queensland about the danger to children from rising coronavirus cases.

Angry at new objections to the agreed plan, the federal government accused Queensland Premier Annastacia Palaszczuk of misleading Australians over the risks to children if and when restrictions are eased and case numbers might increase. 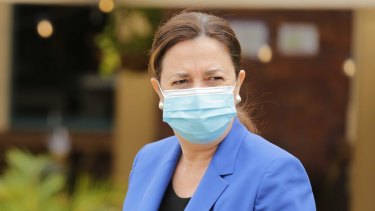 Premier Annastacia Palaszczuk tapped into community anxiety on the fact children under 12 can’t yet be vaccinated against COVID-19.Credit:Matt Dennien

Health experts have warned against panic about children being exposed to the virus when steady increase in vaccinations among older Australians results in a greater proportion of cases among those under 12, given there is no approved vaccine for this age group.

Tapping into community anxiety on the issue, Ms Palaszczuk said the health modelling in the national plan needed to be revised to consider infections among children, citing concerns about a “pandemic of the unvaccinated” in the United States.

“Unless there is an answer on how these young people are going to be vaccinated, you are putting this most vulnerable population at risk,” she said.

“There are many steps ahead of us toward this plan but the number one thing we can do is get as many of our population vaccinated as possible now.”

The impact of the virus on children was part of modelling by the Doherty Institute presented to national cabinet in recent weeks, including sections on the low rate of infections among children compared to older age groups.

“While intense school-based mixing is anticipated between children aged 5 to 14, the transmission matrix accounts for the relatively low observed infectiousness of this age group, associated with a high proportion of asymptomatic infections,” the report said.

The federal government believes Ms Palaszczuk’s stance is unsustainable because it would mean keeping restrictions in place until a vaccine is approved for children when there is no health advice on when that might be.

One federal source said the Premier’s argument was “we will never open up” even if this meant closing tourism businesses on the Gold Coast and the Great Barrier Reef.

Medical experts have warned against alarm about the rate of infection among the young, given public data showing very low rates of serious illness among children.

“They can catch infection easily but most cases have no or mild symptoms. You might not even know you’ve had COVID-19,” Robert Booy, professor of child health at the Children’s Hospital at Westmead, told The Sydney Morning Herald and The Age last week.

“No increase in COVID hospitalisations in children. No evidence of increased severity of Delta in children,” Professor Russell said.

Federal government figures show low rates of serious illness and very few admissions to intensive care units among people aged under 14 during the pandemic. There have been no deaths among those aged 14 and under.

So far this year only 2.9 per cent of COVID-19 cases in children aged under 14 were admitted to hospital with the virus across NSW, Victoria, Western Australia, South Australia, Tasmania and the ACT, according to federal figures.

Treasurer Josh Frydenberg said the advice from medical experts showed the need for caution with children but that this did not mean halting the national plan to ease restrictions in two stages when the vaccination rate reaches 70 and 80 per cent of those aged 16 and over.

Mr Frydenberg cited warnings from former Australian of the Year Patrick McGorry, a mental health expert and professor at the University of Melbourne, about the “shadow pandemic” placing pressure on all Australians including the young.

With Ms Palaszczuk’s remarks intensifying the debate over the risks to children, the federal government called a press conference in which Home Affairs Minister Karen Andrews denounced the Premier’s remarks as “scaremongering” because it was at odds with advice from health experts. 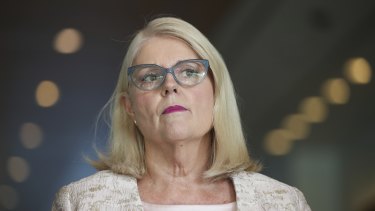 The federal attack centred on the fact that no country had begun vaccinating children aged under 12, which meant it was not reasonable to delay the national plan to wait for a vaccine to be tested and approved for this age group.

“Clearly everyone is concerned about Australia’s children but there is no country in the world that is vaccinating anyone under 12 years of age,” Ms Andrews said.

“It’s also very clear that the best way to protect our children is to make sure that we, as adults, are vaccinated.

“The Queensland Premier is quite clearly doubling down on ‘let’s keep Queensland closed’ and the federal government is of the view that Queensland should be open.”

Stay across the most crucial developments related to the pandemic with the Coronavirus Update. Sign up to receive the weekly newsletter.