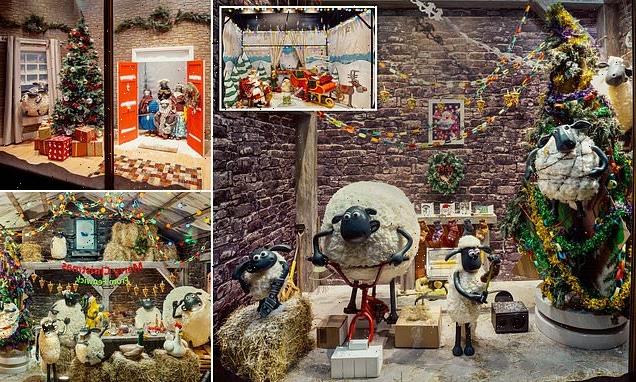 Shear brilliance! Fenwick’s Shaun the Sheep Christmas window display showing characters tied up in fairy lights and enjoying a festive feast is unveiled in an event streamed around the world

Fenwick has unveiled a playful Shaun the Sheep Christmas window display in an event streamed around the world.

The front of the department store’s Newcastle branch has been decorated with different scenes featuring the much-loved Aardman Animations character, including a ‘Christmas morning’ present unwrapping and a festive Christmas lunch.

All are inspired by the new Shaun the Sheep BBC film, The Flight Before Christmas, which premieres next month. 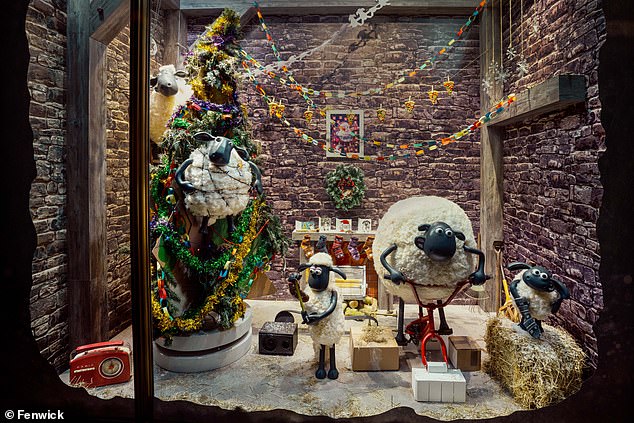 Fenwick Newcastle has unveiled a playful Shaun the Sheep Christmas window display in an event streamed around the world. Above, they get into trouble on Christmas morning 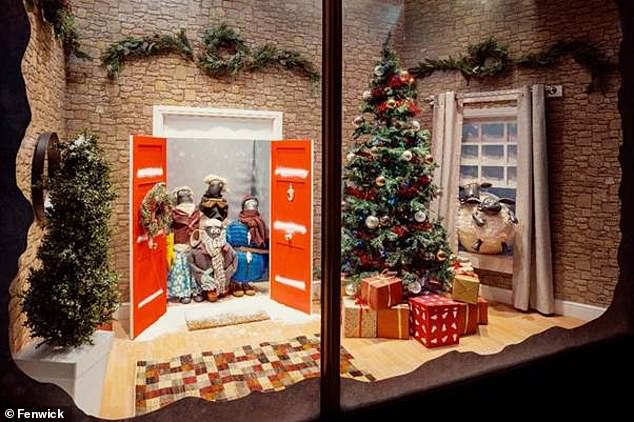 Christmas carols! One scene, also inspired by the film, shows carolers coming to the door 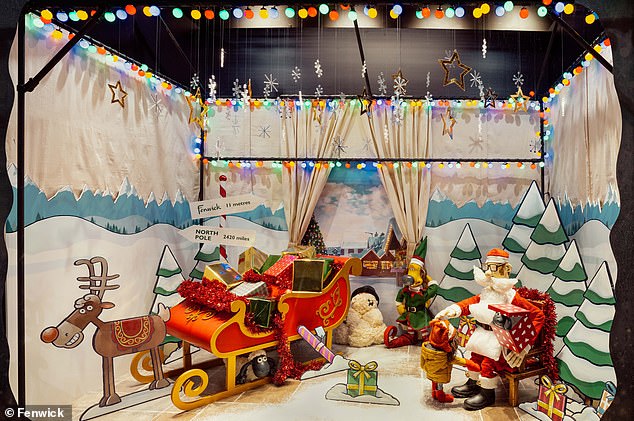 Santa’s grotto: Father Christmas is hard at work in his workshop – and the sign points straight from the North Pole to Fenwick

The unveiling was watched in person by roughly 2,000 people, with a further 228,000 tuning in to a live stream to watch it remotely.

Running across the eight windows of the Northumberland Street store front, The Flight Before Christmas story depicts a festive Mossy Bottom Farm where Shaun the Sheep and his flock live.

Christmas is coming and Mossy Bottom Farm is covered in ice and snow. Shaun the Sheep’s seasonal excitement turns to dismay when a farmhouse raid to get a bigger stocking for the flock accidentally leads to Timmy, Shaun’s cousin and the only lamb in the flock, going missing. 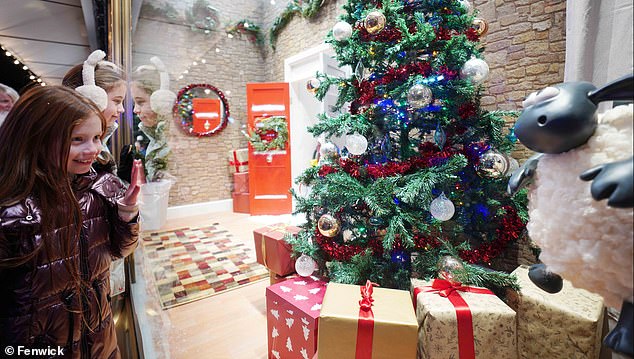 Festive magic: A young visitor peers into the window at the unveiling of the Fenwick display 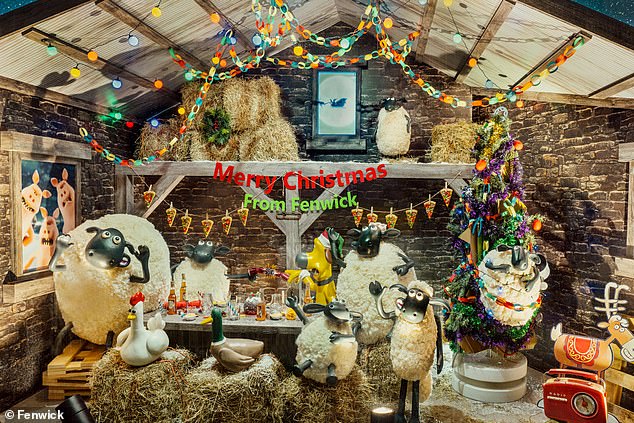 Festive feast! The characters tuck into a Christmas lunch, surrounded by some of their friends 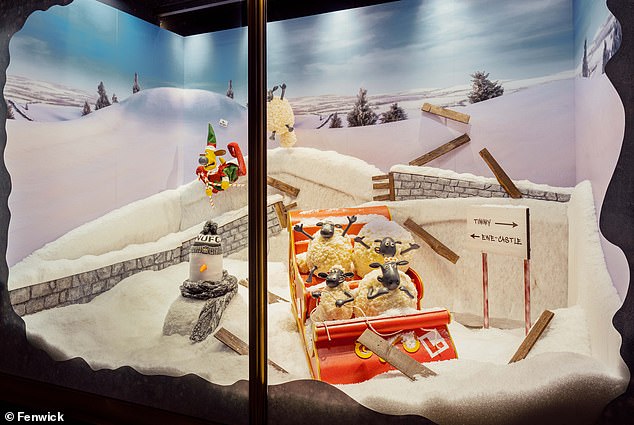 Jingle all the way! A sleigh ride goes badly wrong after it is hijacked by the sheep 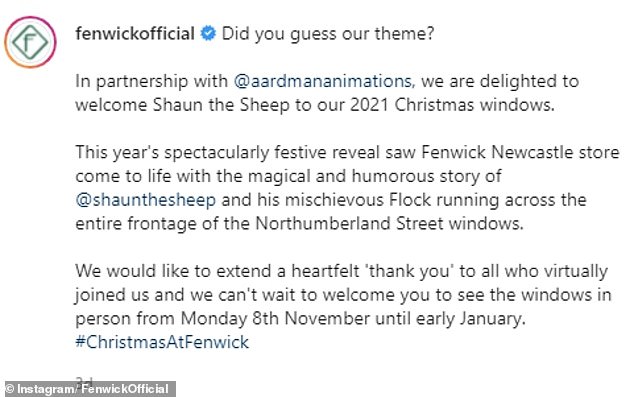 Director at Fenwick Mia Fenwick said: ‘Every year our Christmas window reveal is the highlight of the Fenwick calendar and this year we are thrilled to have partnered with Aardman to give audiences a glimpse into the new Shaun the Sheep Christmas special.

‘It feels very fitting to partner with the legendary British animation studio on the eve of the 50th anniversary of our Christmas windows.’

Shaun The Sheep producer Richard Beek added: ‘It’s a real honour to see moments from our latest Shaun the Sheep film – The Flight Before Christmas providing the inspiration this year’s Fenwick Christmas windows.

‘We are extremely proud of the film and to be able to share it with everybody in such unique and special way is fantastic, I’m sure everyone will love the windows as much as we do!’

Fenwick shared photographs from the unveiling of their Christmas windows on their Instagram page as they thanked fans for viewing their virtual event, saying:  ‘Did you guess our theme? In partnership with @aardmananimations, we are delighted to welcome Shaun the Sheep to our 2021 Christmas windows.

‘This year’s spectacularly festive reveal saw Fenwick Newcastle store come to life with the magical and humorous story of @shaunthesheep and his mischievous Flock running across the entire frontage of the Northumberland Street windows.

‘We would like to extend a heartfelt ‘thank you’ to all who virtually joined us and we can’t wait to welcome you to see the windows in person from Monday 8th November until early January. #ChristmasAtFenwick’

Many people commented to praise Fenwick for their theme choice.

One person wrote: ‘Love it. Well done @Fenwickofficial and everyone involved, thanks for the Xmas cheer’

Another said: ‘That is so cute! I love Shaun The Sheep and Christmas too!’ A third added: ‘A brilliant choice. Absolutely love it’