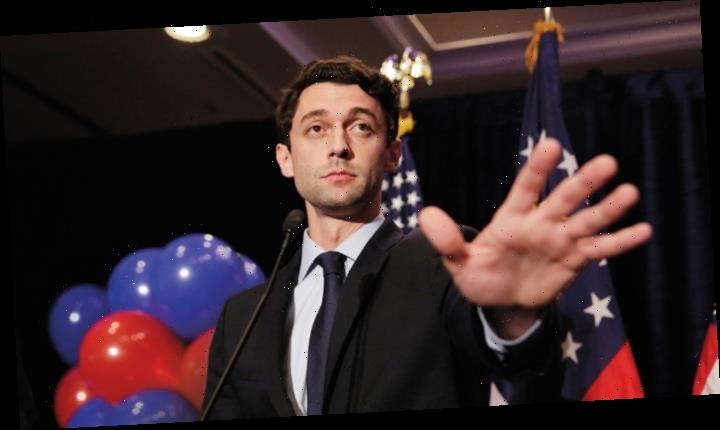 After years producing investigative documentaries that hold the likes of ISIS and East African death squads to account, Democratic Senate candidate Jon Ossoff now finds himself in the media glare, pursued by fellow documentarians and acutely aware of optics.

In this “golden age” of nonfiction, where a film on 30-year-old Rep. Alexandria Ocasio-Cortez sold to Netflix for a reported $10 million at last year’s Sundance, Ossoff, the 33-year-old challenger for a Senate seat in Georgia, in a meta twist, is being courted by an accomplished documentary producer (the campaign declines to name names) who’s eager to follow promising young candidates in this year’s elections.

Ossoff gets it. It’s not often U.S. documentary filmmakers run for office. “It may be that folks who dedicate their careers to digging into the flaws and failures of our political system perhaps view those flaws and failures so starkly that they hesitate to dive in themselves,” he says.

In 2017, a documentary crew was embedded for much of Ossoff’s campaign during the special election in Georgia’s 6th Congressional District, with the prize a seat in the U.S. House of Representatives. A Republican stronghold since 1978, the seat had just been won by Tom Price, who defeated his Democratic challenger by more than 23 percentage points. The special election was needed when President Donald Trump subsequently appointed Price as Secretary of Health and Human services.

Ossoff, an Atlanta native, raised more than $23 million in six months for the campaign. Although he lost the election to veteran Georgia politico Karen Handel, the margin was less than 4%.

“When I got in that race, no one thought the district could be competitive — let alone winnable — for a Democrat. It became the biggest U.S. House race of all time,” he says.

The Georgetown University international relations major, whose interest in politics grew during an internship with civil rights leader and Democratic U.S. Rep. John Lewis, worked on Capitol Hill after graduation, only to become “disillusioned and disappointed” by the glacial pace of change.

In 2013, he joined London-based inves-tigative firm Insight TWI, where he took over as managing director and CEO and restructured the 29-year-old business, leading the charge on two BBC investigations of ISIS war crimes in Iraq and an investigation of death squads in East Africa. The firm is in production on a three-part BBC docu-series with Oscar-winning “Searching for Sugar Man” producer John Battsek.

Producer Nick Fraser, the former BBC heavyweight behind award-winning documentary strand “Storyville,” is working closely with Ossoff on a film about the production of a play in the poverty-stricken nation of Sierra Leone.

Frasier credits Ossoff’s effectiveness. He “understands broadcasters’ ideas. It’s weird that he can comprehend both politics and documentaries,” Frasier says. “Ultimately, his views are about human rights.”

Ossoff’s life changed in 2016, when Trump’s election propelled him into action. “It pulled me back into [the political] arena, because it seemed to me that if there was ever a time to be involved head-on, this was it,” says Ossoff, who moved back to Georgia.

Though he may be closer to the entertainment industry than other candidates — how many political hopefuls can say they’ve pitched to Netflix and National Geographic? — Hollywood’s approval isn’t what he’s after.

“There is a sense in the rest of the country that some folks in Hollywood look down [on them] and that cultural elitism can be a distraction, and corrosive to the effort to build a broad coalition focused on improving our quality of life, solving our healthcare crisis and delivering investment and infrastructure,” he says, cautiously adding that the industry must bring a “respectful approach” to these debates going forward.

When asked what’s needed to improve the public dialogue, his response is swift. “Revitalizing American democracy requires a renewed commitment by U.S. media executives and leaders to independent public interest journalism,” he says. “That’s vitally important because the corruption and partisanship in politics are fundamentally threatening our constitutional system.”

Set to launch a series of town hall meetings across Georgia this month, Ossoff — now well versed in the performance-based nature of campaigning — says he feels “relaxed,” particularly given the dangers faced by his Insight TWI colleagues. The frustrations of politics don’t compare, he says. “When I reflect upon the risks that people all over the world are taking to expose corruption and the truth, I look at what I’m doing here as so much more comfortable and safer.”

Ossoff, who is up against nine other Democratic candidates for the seat currently occupied by Republican David Perdue, has been leaning more heavily into his journalistic background than he did during the congressional race. His experience, he reasons, is more “relevant and valuable now as we see the impact of corruption on our daily lives.”

He says he plans to make sure every voter in the state is aware of his record in journalism “because it speaks to my values.”

“The work I’ve done leading [Insight TWI] has informed my worldview in such a way,” he adds, “that my sense of the importance of transparency, of remaining accessible to the people and honoring the work that journalists do, is heightened.”