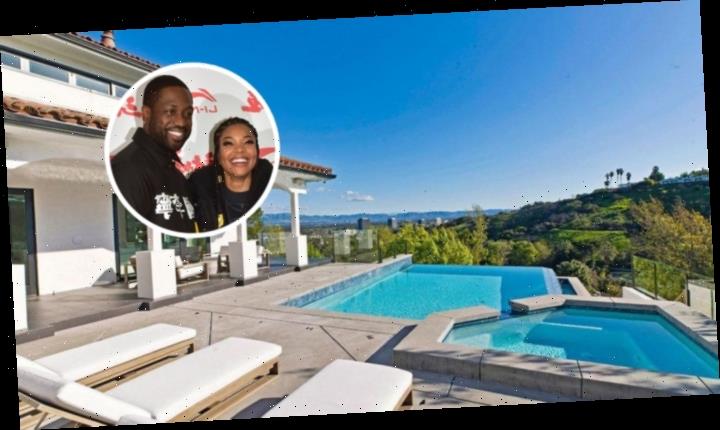 Having already plunked down close to $18 million on great big mansion in the celeb-packed Hidden Hills community in L.A.’s far western suburbs, 12-time NBA All Star Dwyane Wade and “Being Mary Jane” actor Gabrielle Union have unsurprisingly hung a $6.2 million asking price on their former home, a Sherman Oaks, Calif., mansion they picked up not quite two years ago for a tad bit shy of $6 million. Secured behind electronic gates at the end of a private road and perched on a high hillside with panoramic mountain and valley views, the bulky, almost 8,700-square-foot white-stucco neo-Mediterranean villa has five bedrooms and 8.5 bathrooms over three levels of luxurious living space linked by a dramatic circular staircase as well as an elevator.

Wrought iron and glass front doors open to an entrance gallery that spills into adjoining formal living and dining rooms divided by the abovementioned circular staircase. Although the mansion was brand spanking new and never before lived in at the time of the Union-Wade’s 2018 purchase, the couple nonetheless gutted and expensively replaced the kitchen with another high-end kitchen where a boldly veined marble countertop waterfalls off the ends of an island breakfast bar. A variety of informal entertainment areas include a large family room with wet bar, a second-floor den, a state-of-the-art home theater and a climate controlled wine room. Like the kitchen, the light-filled second-floor master suite was also radically renovated; A fireplace was removed so that an entire wall of accordion fold glass doors could be installed in the mountain-view bedroom, and the bathroom was also completely and no-doubt at great expense thoroughly overhauled.

Outside, there’s a faux-grassed area opposite the front door and across the other side of the swooping, S-shaped driveway, and a long veranda wraps around the back of the house to a dining and lounging loggia that overlooks an infinity-edge swimming pool and spa. Tucked up next to the hillside, an outdoor kitchen sits under the protected shade of a trellis structure and includes a newly added pizza oven.

The listing is jointly held by Anna Marie Simpliciano of Hilton & Hyland and Althea Bowman at B&B Investments Realty.

Not too much is publicly known about the couple’s new L.A. digs, as the A-lister-style Hidden Hills spread was never listed on the open market. However, marketing materials turned up online show the freshly-built mansion spans around 22,000 square feet over three floors with seven bedrooms and nine bathrooms along with a home theater, a fitness and spa suite and garage parking for a dozen cars.

The fashionable couple have long maintained a mansion in Miami Beach, Fla., a 12,000-square-foot Mediterranean on a manicured waterfront acre, that is currently for sale at $29 million, much less than the $32.5 million asking price the property was saddled with when it first popped up for sale in the fall of 2019 but still almost three times the $10.65 million Wade paid for the place almost a decade ago.