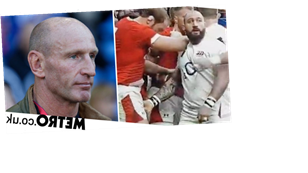 Gareth Thomas has apologised to the ‘very small minority’ who were offended by the comments he made after Joe Marler was seen grabbing Alun Wyn Jones’ genitals during England’s Six Nations clash with Wales.

England survived a second-half fightback from Wales to win 33-30 and secure the Triple Crown – with Anthony Watson, Elliot Daly and Manu Tuilagi all crossing over for the hosts – but much of the talk after the game surrounded a number of misdemeanors involving Eddie Jones’ players at Twickenham.

Ellis Genge’s sin-bin and Manu Tuilagi’s sending off reduced England to 13 men in the dying moments of the match and loosehead prop Joe Marler has been widely condemned after replays showed him fondling the sensitive area of Wales captain Wyn Jones in the first half.

Thomas, who came out as gay in 2009, said: ‘It would’ve never have happened in my day and I’m really upset about that – because if it had I would have never retired!’

Fellow pundits Sir Clive Woodward, Jonny Wilkinson, Mike Phillips and host Mark Pougatch all burst into fits of laughter in the studio, but former England and Leicester fly-half Andy Goode was one of many spectators who failed to see the funny side.

‘Imagine if someone touched another man or woman up in the workplace and then someone joked about it on TV,’ Goode tweeted.

‘People have admiration for Gareth Thomas with what he’s been through and opened up about but I wonder if something similar was done in a homophobic way he’d joke about it?’

‘So don’t change the narrative to justify how you feel.

After the match, England head coach Jones slammed the ‘rubbish’ refereeing on display at Twickenham.

Asked about the red card Tuilagi received for a no-arms tackle on George North, Jones replied: ‘I find it bizarre. I usually don’t comment, but I don’t see how you can tackle the guy.

‘How else are you supposed to tackle him? Absolute rubbish.

‘I’m sorry to break my rule. I think there is no common sense applied. Clearly the guy is falling, Manu is coming over the top to kill the tackle and is doing everything he is supposed to.’

France will be looking to tighten their grip on top spot when they face Scotland at Murrayfield on Sunday afternoon.