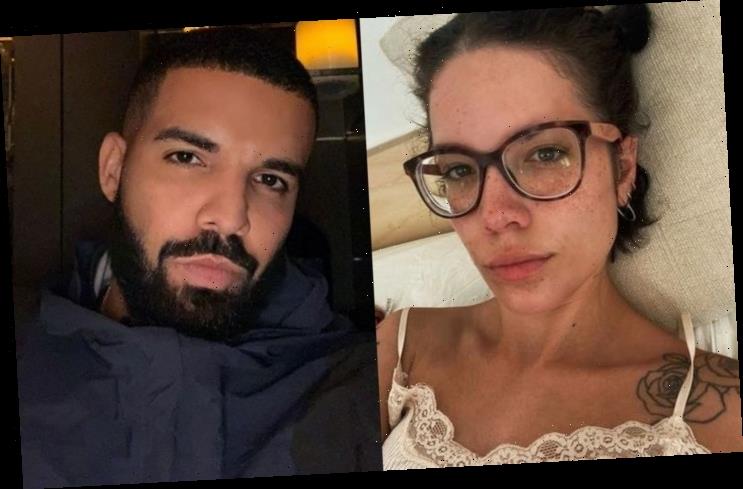 The ‘Without Me’ hitmaker calls out the Canadian rapper as she is eating snacks from her Spotify plaques after reaching three billion streams on the streaming platform.

AceShowbiz –Halsey enjoyed an outdoor feast from her award plaques as she celebrated three billion Spotify streams on Monday (21Sep20).

The two-time Grammy nominee, who recently celebrated the fifth anniversary of the release of her debut studio album “Badlands”, took to social media to share her latest achievement.

In her post, the star ate snacks and candy from two of her Spotify plaques – one for one billion streams of the 2016 Chainsmokers song “Closer”, on which she’s featured, and another for her 2018 single “Without Me” – each of which featured a round silver dish with the Spotify logo.

As the camera panned up from the table, the hitmaker was seen enjoying a glass of rose wine as she said, “And they owe me one more too,” seemingly referring to her 2018 track “Eastside”, on which she collaborated with Khalid and Benny Blanco, which also surpassed a billion streams.

The “Manic” star captioned the video, “2 outta 3 of my billion plaques received. Check mate @champagnepapi thank you @spotify.” Her mention of Drake comes after he posted a similar video of himself eating pasta out of his Spotify award for a billion streams on his 2018 single “In My Feelings”.

He captioned his clip, “We drank out of Grammys now you need a BILL to eat off the plate @spotify.”

The “Hotline Bling” hitmaker became the most-streamed artist of the decade on Spotify last December, with more than 28 billion streams, having released nearly 200 songs on the streaming platform since 2010.