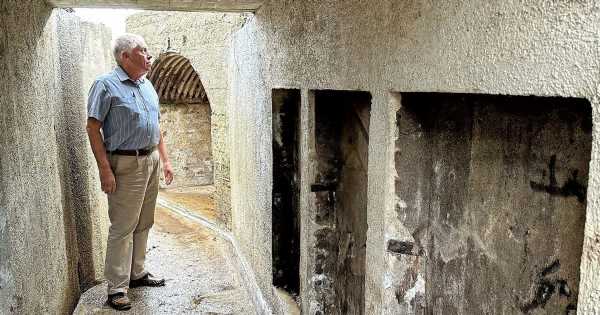 Don’t miss a thing! Sign up to the Daily Star’s newsletter

A pair of Nazi bunkers used by the Germans while they occupied part of the British Isles is on the market – complete with trenches, gun stations and battlements.

The bunkers on Alderney were home to two dozen Third Reich officers and soldiers who invaded the Channel Islands during World War 2. They were built sometime between 1942 and 1944.

The plot on the south-west of the island is up for sale with Bell & Co estate agents, who say it offers a rare chance to see what D-Day might have felt like from the German perspective.

READ MORE: KFC apologises after celebrating anniversary of start of the Holocaust in Germany

The Channel Islands were invaded by Germany in June 1940, but the occupiers found themselves trapped after D-Day.

According to the particulars on the agency’s website: “This open historical site exemplifies the massive offensive works carried out by the Germans during their occupation of Alderney during World War 2.

“Overlooking the Gannet Rock to the south-west, the area has just been extensively cleared, revealing more bunkers interconnected by open trenches.

“Work has also been carried out at the brick kiln, a generator bunker, ammunition shelters and personnel shelters. The site also boasts massive gun emplacements mounted in a hexagonal concrete pit having a range of 22 km.

“Below the gun pit are the former shell hoists and ring-shaped passages. Adjacent to these gun pits are personnel shelters that housed 24 men and 3 officers.”

Bell & Co managing director Andrew Eggleston hopes that the buyer will keep the property open to the public to explore, as it has been for years.

“It would be a terrible shame if someone were to buy it and then start padlocking it,” he said. "[The current owners have] done so much work to it, it’s quite amazing."

The land will be sold by sealed bid, with the deadline set for December 9.

It is thought that it will sell for somewhere in the region of £40,000. Expressions of interest have already been made.