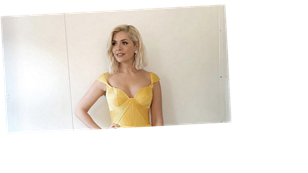 Holly Willoughby has stunned in a lemon yellow dress for the semi-finals of Dancing On Ice.

The stunning 40 year old television presenter posed stylishly with one hand on her waist and looked to the side as she showed off the outfit.

She penned to her seven million Instagram followers: “So tonight is the semi-final of @dancingonice See you on @itv at 6pm… all our celebrities skate twice tonight and their second dances are super emotional…”

Get exclusive celebrity stories and fabulous photoshoots straight to your inbox with OK!'s daily newsletter . You can sign up at the top of the page.

Singing off with a yellow heart emoji, the mum-of-three also told fans her gorgeous yellow floor-length gown was from Iris Serban.

Holly has worn a dress by the brand before; the stunning floor length pink chiffon silk gown she wore on Valentine’s Day.

The glamorous presenter, who recently stunned viewers in a playful daisy dress, partnered this week’s yellow dress with her short hair in a wavy bob, with one side tucked behind her ear.

She opted for some sparkling earrings from NOA fine jewellery, and her silver heels are from René Caovilla.

Gushing over her showstopping look one excited fan penned: “OMG THE YELLOW!! YEP THIS IS MY FAVOURITE DRESS IT LOOKS SO GOOD ON YOU.”

Another wrote: “Stunning dress Holly. Yellow really suits you,” and a third added: “Absolutely Stunning,” followed by a string of heart emojis.

Rebekah Vardy was the most recent celebrity to be voted off Dancing On Ice alongside her professional partner Andy Buchanan.

The wife of footballer Jamie Vardy competed in the skate off against rapper Lady Leshurr and her partner Brendyn Hadfield.

Three of the judges, Ashley Banjo, Jayne Torvill and Christopher Dean chose to save the Birmingham-based rapper and John Barrowman's vote for the former I'm A Celebrity… Get Me Out Of Here! contestant was outnumbered.

The 39-year-old had said to Holly Willoughby and Phillip Schofield that her performance "was awful" before the judges sent her home.

Following the result, Rebekah told the co-hosts: "It's been absolutely incredible, I've loved every moment of it.

"But you know these things happen and I've had a great time and thank you so much for teaching me," she added as she turned to her partner Andy.

Phillip then asked if she would continue skating, and to this the mother of five responded: "Definitely, the kids are so desperate to skate as well."

The final of the show will be moved forward by one week after seven stars, five of which were celebrities, had no choice but to drop out of the series.

It means the fan-favourite skating competition will run one week shorter than previous seasons, with only five pairs currently left standing. The final will air in just two weeks time.