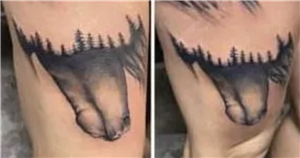 People have been left giggling at an awkward tattoo fail.

The tattoo has had people in hysterics after it was posted in a Facebook group, as people couldn’t believe their eyes.

And this one certainly caused quite the stir.

The image shows a tattoo of a horse’s face that's blended into some trees.

However, social media users unanimously agreed that it looked a lot like a penis.

“I would love a horse tattoo. This ain’t it though”, joked one person.

While another wrote: “Yep, that’s definitely a PP lol.”

“It took so long to know what I was looking at, definitely thought it was a peen”, added a third.

Many thought the design was too graphic and cheeky for the resemblance to be accidental.

One wrote: “This cannot be accidental for the quality of the tattoo and the detail. And that’s actually really f***ing sad and rage inducing. Someone should really hold that artist responsible. Super not ok.”

While another added: “That’s a penis. I’ve heard tattoo artists tell me themselves that a lot of them slip dirty things into designs to see if they can get away with it. This looks like one of those to me.”

A TikTok user name Phoebe said she came up with a wave-like tattoo design that she'd wanted for years and finally got it inked on her wrist.

However, she soon realised where her inspiration had come from as she noticed the same design in her fridge.