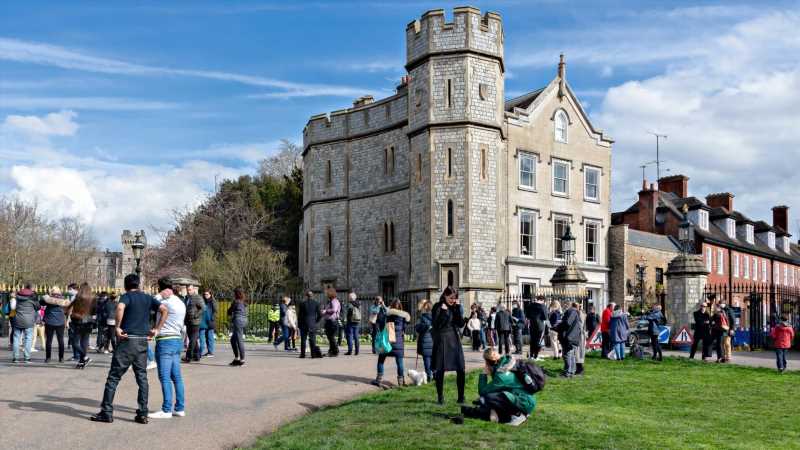 British journalist, Matt Frei, tweeted that the atmosphere at Windsor Castle on the morning of April 17, 2021, was “weird.” COVID-19 rules dictated that crowds stay away from the royal residence and pay their final respects to Prince Philip from the comforts of their homes, watching via live stream or TV. And, hours before the funeral started, it looked as if people might obey. Frei noted there were “more security than cameras. More cameras than mourners.”

It’s not just public health authorities who have asked people to stay away. Buckingham Palace has repeatedly pleaded for mourners to respect public health protocols and stay clear of the funeral procession. It even arranged for a heavy police presence meant to deter gatherings (via Wall Street Journal). All, to little avail. By early afternoon, everything began to change. ITV news tweeted that people were gathering outside Windsor castle to pay their respects to the late prince and lay flowers at the castle’s gates. By the time Prince Edward and his wife, Sophie, Countess of Wessex, arrived at Windsor Castle to take part in the funeral procession, they drove, as per journalist Rhiannon Mills, past crowds. “Sophie had tears in her eyes and told me through the car window ‘the Queen has been amazing'” Mills tweeted.

It’s now clear that, despite COVID-19 safety regulations, and defying the royal family’s pleas for distance, crowds upon crowds of mourners have come out to witness what they can of Prince Philip’s last goodbye. ABC News’ Roscoe Whalan posted footage of hundreds of mourners along London’s Thames street to Twitter where, in addition to press and police, members of the public stood, sat on benches, and even hugged each other, waiting for the prince’s funeral procession.

As CNN documented via photos, outside of Windsor, hundreds of additional mourners have been prevented from spilling into the street by metal barriers. Most seem to be wearing face masks, many came bearing posters or flags to pay their respects. Meanwhile, where authorities did not erect barriers, streets have begun to overflow. “So much for ‘no crowds,'” tweeted NBC’s Sarah Harman. Daily Mail, meanwhile is reporting that the police have formed a “ring of steel” around both Buckingham Palace and Windsor Castle, in expectation of thousands to show up.