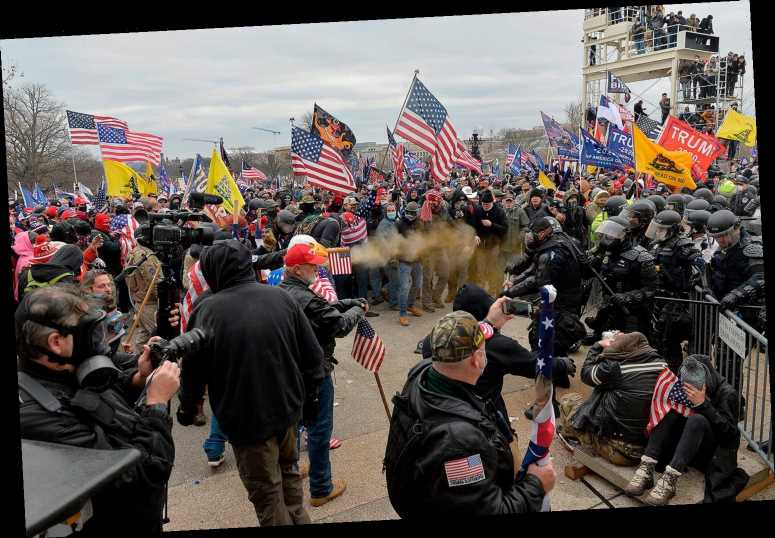 On Wednesday, violent pro-Donald Trump rioters descended on the U.S. Capitol building while lawmakers were working to count the Electoral College votes certifying President-elect Joe Biden's win over Trump. At least 5, including a Capitol Police officer, were killed and many were injured.

The next day, teachers across the country grappled with how to explain the deadly event — during which nooses hanged in front of the Capitol building, confederate flags were waved in the halls and the mob ransacked offices — to students of every age, with several sharing resources on social media and turning to fellow educators for ideas.

Randi Weingarten, president of the American Federation of Teachers, posted a Twitter thread with free lesson plans on topics ranging from the foundations of democracy to the nation's history of peaceful transitions of power.

"Students across America are watching," Weingarten wrote. "You don't have to be a civics teacher to know that this moment is going to be very difficult for so many educators across the country."

"You can differentiate between peaceful protest and violence," she later advised. "Storming the Capitol and threatening duly elected officials is mob rule not peaceful protest."

Georgia-based teacher Marian Dingle also used Twitter to urge other teachers to take a moment in their classes to acknowledge the events, garnering hundreds of replies and over 1,000 likes.

"So educators, I ask you in all sincerity: What are you teaching tomorrow?" she asked. "Will it enable your students to think critically or will it make them resent you years from now when they learn of the truth you *didn't* tell?"

In the replies, one teacher shared that she would show photos from the day and ask her students to reflect on each image by filling out worksheets prompting them to finish the sentences, "I see, I think, I feel and I wonder."

"And then I will let them lead the conversation so it is student led and go from there," she wrote.

Hayley Breden, a high school history teacher in Colorado, created an email template to send to students and posted it on Twitter for other educators to use. In the email, she told students they would be taking a break from their normal lesson plan to "look at the facts and process our reactions to" Wednesday's events.

Teachers based in the Washington, D.C. area had the added task of helping students understand a violent riot that had occurred in their own backyards.

"I personally have approached my class differently today because it is imperative for us to address the current state of our nation," Ocean-Miracle Morris, a World History and African American studies teacher at Thurgood Marshall Academy in Washington, D.C., told Good Morning America.

Morris said she titled her lesson "OUR WORLD, their racism" and took the opportunity to share images and news clips that addressed what would have happened if the riot was associated with the Black Lives Matter movement.

"Students, a lot of them said Black Lives Matter was us fighting for basic human rights and for people not to be killed because of their skin color," she added. "The Capitol riot was just because they didn't get what they wanted as white people. We all know that history repeats itself and that is truly enough but to fully understand the importance of us educating our own, my own people, I must continue to create conversations around Black world history, our history."

Collin Radix-Carter, a preschool teacher at Mann Elementary in D.C., said his first priority was making sure his young students felt safe.

"The big thing is that I wanted to make sure our children knew that we are keeping them safe," he told WDVM. "From our mayor and our teachers and our school and your families, we just want to make sure that you feel safe."

"We've been talking to them about how to resolve anger in more appropriate ways, so using that as a bridge to kind of figure out, you know, it is okay to be angry, but the way that the protesters were showing their anger was not appropriate," Radix-Carter added.

One D.C.-area vice-principal, Chris Wade, described the nearby riots as "traumatic" for his elementary schoolers when speaking to The Washington Post.

"Seeing images of people breaching the Capitol building for the first time since the British … and images of nooses and Confederate flags, it is traumatic," he said. "To move forward with another day of school as if what happened is a normal day would be a disservice to our students and staff." Some other educators have spoken up about trying to explain the Capitol riots to students who may come from more conservative backgrounds.

Tina McIver, who teaches English in a conservative Kansas town dominated by Trump supporters, told The Post that she decided to not breach the topic at all.

Oklahoma history teacher Jack Reavis, who said his class is composed of a mix of students from liberal and conservative backgrounds, showed his students live feeds of the riots in an attempt to display the truth.

While playing the videos in real-time, Reavis received a text message from his daughter telling him that a former student of his was among rioters inside the Capitol building.

Still, he said those in his class were shocked by events unfolding in front of them. "It's hard to refute what they saw," Reavis said.