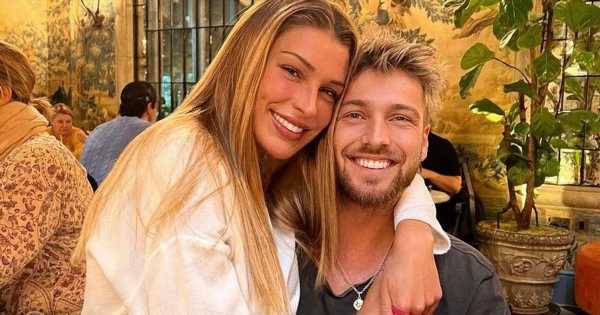 The Thompson family are living their best lives on the picturesque island of Mykonos.

Sam Thompsonand his sisterLouisewere joined by Sam’s girlfriendZara McDermott, as well as Louise’s fiancé Ryan Libbey and the couple’s son Leo on the trip.

Taking to Instagram on Tuesday the party documented different parts of their first day to the sunny location.

The trip was the first for five month old Leo and proud auntie Zara, 24, shared plenty of snaps of him before showing off her goofy side as she and Sam brushed their teeth in a video.

Zara and Sam, 29, also showed off their romantic side in a snap of them kissing on their hotel balcony with the caption: “me & you, always”.

While Sam poked fun at himself for donning Crocs on the flight and pondered how his feet would look after some time in the sun.

The group were joined by the Thompson siblings’ parents for the trip and Louise, 32, shared snaps of them all on the plane clinking Champagne glasses.

She also gave fans a glimpse into fiancé Ryan, 31, as a doting dad as he rocked his son during the flight before sharing success at the fact that he didn’t shed a tear for the whole duration.

This is the group’s first trip together with baby Leo who Louise welcomed last year and was candid about the difficulties surrounding his birth.

Earlier this month the Made in Chelsea staropened up about the "unbearable" side effects of the antidepressant medicationshe has been taking.

"Have had a really rough few days mentally," the 32 year old began. "Going to try some new medication because I've been on 100mg of sertraline for over 10 weeks, and the random onset of brain agitation is simply unbearable."

The fitness guru added: "I think I'd rather be anxious. Did anyone else have horrible side effects?"

While Zara was also recently candid about thechronic back pain she’s been suffering with.

"Time for an Epsom salt bath, ibuprofen & some super greens before bed," she told fans as she got ready for a bath.

"I've been training on a mildly injured back for the past 6 weeks and not told anyone about how bad the pain was getting, because I've been scared to speak up as I knew it would mean I had to take time off training.

"I've lived with constant back pain since I was 15 so chronic pain is normal for me lol. But i started getting pain in a new place after I trained alone without my PT there and I think I was a bit lazy with my form on some deadlifts. And ever since then it's been getting worse by the day!

"It's now at a point where I actually have tears in my eyes at certain points of the day. This is a big lesson to me to speak up more if I'm in pain and not just power through thinking it will sort itself out."

For all the latest showbiz stories, sign up for OK! 's daily newsletter here.