The way Hamish Macdonald tells it, moving from the ostensibly plum job as host of Q+A back to his old stomping ground of The Project is less a case of the ABC losing a son than the son rejoining a family he’d never really left behind.

“The Project is part of my DNA,” says Macdonald, who first appeared on the show in 2011. “I’ve wandered off and done a few different things over the years but I’ve kept coming back because it’s something I really believe in, it’s a show that I love, it’s an ecosystem of people that I love and get along with.

“Tommy [Little], Carrie [Bickmore], Lisa [Wilkinson], Waleed [Aly], Pete [Helliar], they are genuinely my friends. They’re people I talk to all the time, they’re people that my partner is friends with, I’m friends with their partners, we see each other on holidays. They’re a very big part of life for me, and I love working with them. And to be able to walk back into that is a genuine privilege.” 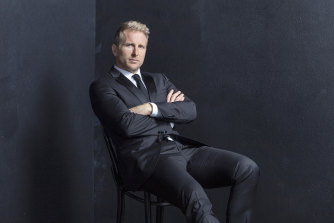 Hamish Macdonald’s arrival at the ABC was hailed as a coup for both of them. But it didn’t turn out quite as planned.Credit:Nic Walker

Macdonald is far too discreet to say so, but it’s clear he didn’t find the ABC quite so welcoming. No doubt the disjointed nature of television production in the age of COVID was a factor and a show built around the concept of a live audience asking questions was going to be especially compromised (and declining ratings and a shift to Thursday nights didn’t help). But nothing quite prepared him for the way he would become a social-media lightning rod for the frustrations and anger people were feeling during the 18 months he was host of Q+A.

He is at pains to make it clear his woes are nothing compared to those of the many Australians who have done it tough because of bushfires, lockdowns, health concerns and all the rest. “My overwhelming feeling is I have been lucky to have good reliable work throughout all of this and, given the times and the circumstance, to gripe about anything would be pretty churlish,” he says.

But the abuse he copped on social media was extreme enough that he quit Twitter in January – a massive step for the host of a program built in part on interactions via the platform. 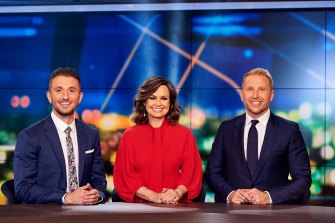 Hamish Macdonald rejoins 10 as co-host of The Sunday Project with Lisa Wilkinson and Tommy Little. Credit:Ten

“I didn’t go into it naively,” he says of the Q+A role. “I knew there would be added scrutiny. But I do think people would be surprised by the degree to which people who work in roles like that are left alone to navigate the trolling and the abuse that comes with it. It was a surprise to me.

“It was overwhelming at times,” he continues. “It became something I could not manage on my own, and I could not get away from it.”

He found the abuse “pretty isolating”. And not even leaving the platform could stop it, “because it had the ability to jump from social media into the real world and real life so frequently”.

He never felt physically threatened, “but it was certainly not uncommon for people to come up to me in the street and want to get stuck in about decisions made by people, by program makers, about the people on the show, things that people on the show said. Sometimes even on your front doorstep, not in a threatening way, not in a deliberate way, but in a way that really made it difficult to feel confident going on air, and confident in your own ability to do the job.”

It really made it difficult to feel confident going on air, and confident in your ability to do the job

Macdonald takes no delight in talking about any of this. He doesn’t want to play the victim card, and he has lots of good memories of his time on Q+A – he cites the increased diversity of guests and questioners as a major achievement, and counts getting panels of premiers, doctors and Chinese government officials to answer questions live at the height of the pandemic’s first wave as major wins.

Tonight, he’s back in friendlier territory, taking his seat on the desk as co-host, with Lisa Wilkinson and Tommy Little, of The Sunday Project. He’ll also co-host on Fridays (the show is filmed in Melbourne Monday to Thursday, and in Sydney, where Macdonald lives, on Friday and Sunday). He’ll do some field reporting, and will still be filling in on Friday mornings on Radio National – he has a six-week stint starting from next month – but he has bigger ambitions within the expanding 10 ViacomCBS universe too.

“The addition of Paramount+ and streaming made this a really easy decision for me,” he says. “There is a very big world of opportunity for doing all sorts of things.”

“Yeah. There’s nothing I want to say specifically at this point to that, but the conversations have been pretty good and this is very much the right offer at the right time.”

When Macdonald’s shift to the ABC was announced in November 2019, it looked very much like a coup for both of them. But not all marriages work out. And if Macdonald is more intent on looking forward with positivity than looking back in anger, who can blame him.

“Sometimes you just need to make a decision to do the thing that is going to make you happiest,” he says. “And for me, for my loved ones, and for the people around me, it was obvious, this choice. I really could not be happier.”