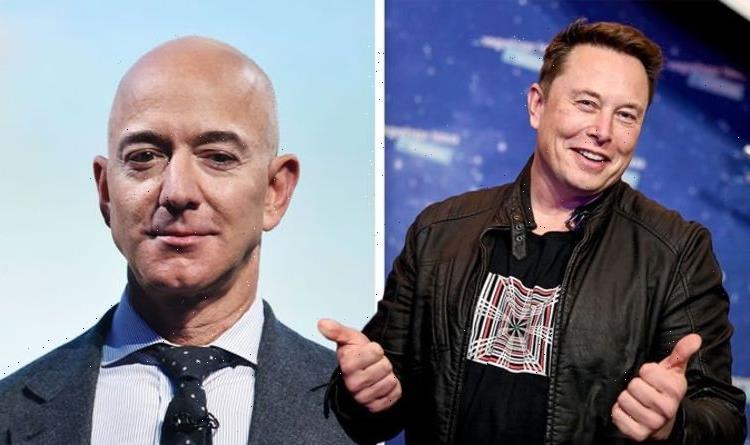 Jeff Bezos will blast off into space from West Texas on July 20 aboard Blue Origin’s signature rocket, the New Shepard. The tech mogul behind the Amazon empire will become the second billionaire to fly into suborbital space, launching hot on the heels of Virgin Galactic’s Sir Richard Branson. However, the 21st-century space race is a tough battlefield and fans of the California-based SpaceX believe the battle has already been won.

One meme, in particular, cut deep as it highlighted a key difference in SpaceX and Blue Origin’s spaceflight capabilities.

The meme features a scene from the Star Wars film, Clone Wars, with the characters Anakin Skywalker and Padme Amidala.

However, the characters were swapped out for Mr Bezos and Mr Musk respectively – to a hilarious result.

In the first panel, Mr Bezos proudly announces he is going to space.

An amused Mr Musk responds to the news by asking: “Orbital, right?”

After Mr Bezos fails to acknowledge this in the next panel, the meme concludes with a worried-looking Mr Musk asking again: “Orbital, right?”

The meme points out in no uncertain terms that Blue Origin’s first crewed flight will not hit orbital space.

Instead, Blue Origin will carry its crew of four astronauts past the edge of space – the so-called Karman line – before bringing the crewed capsule back down to Earth.

Mr Musk, who frequently responds to his fans on Twitter was clearly amused by the meme.

The South African entrepreneur replied to the post with a simple “haha”.

Of the three billionaires presently reaching out for the stars, Mr Musk is the only one to have successfully launched humans into orbit.

Thanks to the efforts of his company, SpaceX, Mr Musk has been awarded a NASA contract to launch astronauts to the International Space Station (ISS).

As the race to space heats up, the three billionaires appear to be embroiled in a petty feud.

Before Sir Richard launched on his flight on July 11, Blue Origin launched a scathing attack on the company’s spaceflight credentials.

Blue Origin was quick to point out online Virgin Galactic’s spacecraft, the VSS Unity, would not pass the Karman line.

At an altitude of 62 miles (100km) the majority of the world agrees the Karman line demarcates the border of space.

But the issue is not as clear-cut with experts saying there is no clear distinction between where the Earth ends and space starts.

The American standard accepts any flight above 50 miles (80km) earns a pilot their astronaut wings.

Blue Origin, however, tweeted on July 9: “From the beginning, New Shepard was designed to fly above the Kármán line so none of our astronauts have an asterisk next to their name.

“For 96 percent of the world’s population, space begins 100 km up at the internationally recognized Kármán line.”

Despite the petty exchange of words, Blue Origin wished Virgin Galactic a “great flight” on July 11.

The company tweeted: “@richardbranson wishing you and the whole team a successful and safe flight tomorrow. Best of luck!”

Mr Musk also appeared at the company’s base of operation in New Mexico, Spaceport America, to watch the flight in person.