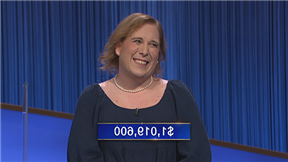 Amy Schneider took home $42,200 on Friday’s episode of “Jeopardy!,” bringing her total winnings to $1,019,600. She is only the fourth person in the show’s history to break $1 million in non-tournament play.

“It feels amazing, it feels strange,” said Schneider, an engineering manager from Oakland, Calif. “It’s not a sum of money I ever anticipated would be associated with my name.”

Friday’s episode also marked her 28th consecutive win, pushing forward as the woman with the highest ever number of consecutive wins. She beat Julia Collins’ 2014 record of 20 games on Dec. 29, 2021, and has the fourth highest number of consecutive games overall. “Twenty wins! It happened months ago for me, and I’m still trying to take it in,” she wrote on Twitter. “In my highest of high hopes, I never dreamed of matching Julia’s streak. It’s hard to say how I felt: proud, dazed, happy, numb, all those things.”

In November of 2021, Schneider also became the first out trans contestant to make the Tournament of Champions, the annual event that brings together the top 15 players of the season. She is also known for having worn a trans pride flag pin while competing near Thanksgiving. “Thanksgiving is a time for family, and sadly it’s still true for a lot of trans people that that can be difficult for them, that they may have a difficult relationship with their families,” she said in a video posted to the official “Jeopardy!” Twitter account on Nov. 26. “I’m fortunate enough not to have that issue myself, but I know it’s out there, so I just wanted to send that message of support.”

Schneider’s next game of “Jeopardy!” will air on Jan. 10.