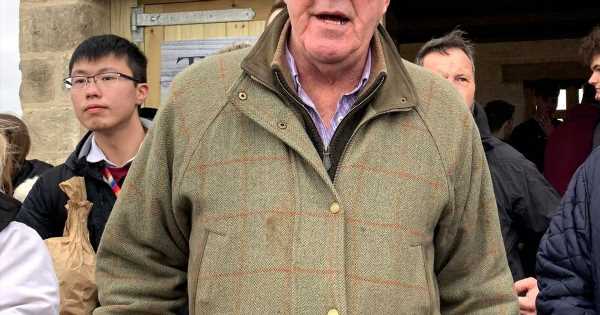 Clarkson's Farm has been a colossal success, but farm-owner and presenter Jeremy Clarkson has revealed his farm has been hit by bouts of major issues during the pandemic.

The former Top Gear star, 61, has documented his deep dive into the world of farming for all to see on his Diddly Squat Farm, and his fans have been loving it.

The show has been topping Amazon Prime Video's ratings as the streaming service's highest-rated show ever.

Yet one of his biggest problems has not been the farm work at all but instead the mammoth task of building his own house.

After James May and Richard Hammond decided to blow his old house up in an impressive, yet extremely dramatic stunt for The Grand Tour, Jeremy decided the best option was to build his dream home right in the middle of Diddly Squat Farm.

According to the Express, work began in 2019 right before Covid hit, and the Who Wants To Be A Millionaire host ran into problems almost immediately.

However, the presenter revealed he's had a six month wait for items that he didn't even realise were in short supply.

In his latest column for The Sun, Jeremy wrote down the disaster, completely shell-shocked at the fact there was a shortage of curtains.

He wrote: "Curtains? Nope. There’s a six-month wait for those too!" But he joked: "Still, at least I don’t need a new car — because there’s now a global shortage of semi-conductors, which means very few can be made."

He then added: "It’s like the world can’t remember how it works.

"We’ve spent the last year or so home-schooling our kids and learning how to bake bread and now we’re back at work, we’ve all forgotten what it is we should be doing!"

With the house finally just about habitable, Jeremy explained that even buying a sofa has never been such hard work.

He wrote: "I went last week to buy a sofa, imagining that there’d be no supply problem with cushions.

"But oh dear, how wrong I was. It turns out that there’s a nationwide shortage of feathers thanks to a supply problem with China."

Sarcastically, he added: "The upshot is that soon I’ll move into my house where I shall spend the next two years sitting on the floor, reading old books by candlelight. And then using a ladder to go upstairs to bed.

"Unless there’s a ladder shortage as well. Which there probably is."

Yet it's not just home furnishings that have been difficult to get hold of, as a shortage of building supplies has meant that many of the presenter's developments were put on hold for the foreseeable, with some only just resuming.

Jeremy revealed that his staircase is due to be installed but it’s not been possible to do because there's a shortage of steel.

He said: "The RSJs needed to hold it upright are still entombed in rock, several thousand feet beneath the hills outside Sheffield.

"Back in May, British Steel simply stopped taking orders for construction steel because they had no hope of fulfilling them. There was a similar problem last year with plaster.

"There’s a shortage of aggregates, too, because HS2 is consuming everything that can be supplied — and if you want some drainage, you are better off using pipes made of gold.

"Because it’ll be cheaper than the plastic alternative."

For fans of the show, they'll be happy to know that there are reports of Amazon Prime commissioning Clarkson's Farm for series two.

However, Jeremy recently took to Twitter to share a disappointing update on when viewers might expect to see a second season, and he tweeted: "I fear that farming is a very slow process. Even slower than filming."