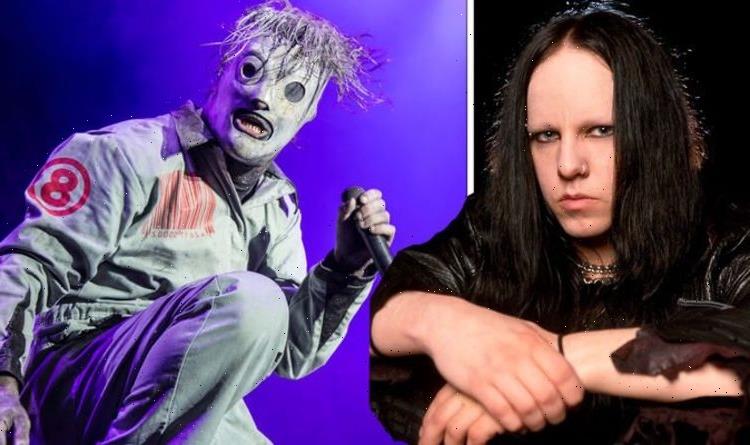 This week Jordison was found dead at his home, aged 46-years-old. The drummer became an iconic part of the metal scene as Slipknot grew in popularity and through the years the musician also founded the bands Murderdolls, Scar the Martyr and Vimic. In 2014 the drummer reportedly “left” the band due to “personal reasons”.

What do you think? Should Joey Jordison have been kicked out of Slipknot? Join the debate in the comments section here

A statement on the Slipknot website read: “It is with great pain but quiet respect that for personal reasons Joey Jordison and Slipknot are parting ways.

“We all wish Joey the best in whatever his future holds. We understand that many of you will want to know how and why this has come to be, and we will do our best to respond to these questions in the near future.”

The band added: “It is our love for all of you, as well as for the music we create, that spurs us to continue on and move forward with our plans for releasing new material in the next year.

“We hope that all of you will come to understand this, and we appreciate your continued support while we plan the next phase of the future of Slipknot.”

Slipknot went on to replace him with new drummer Jay Weinberg.

Years later Jordison revealed he was fired from the band via email, something he went on to condemn.

He said: “No band meeting? None. Anything from management? No, nothing. All I got was a stupid f*****g email saying I was out of the band that I busted my a** my whole life to f*****g create.

“That’s exactly what happened and it was hurtful. I didn’t deserve that s**t after what I’d done and everything I’d been through.” (Via Metal Hammer)

Telling his side of the story, the drummer went on: “They got confused about my health issues and obviously even I didn’t know what it was at first. They thought I was f****d up on drugs, which I wasn’t at all.”

Jordison added: “I’ve been through so many things with those guys and I love them very much. What’s hurtful is the way it went down was not f*****g right. That’s all I want to say. The way they did it was f*****g cowardly. It was f****d up.”

The musician also revealed he wanted to get back with the band, despite his “cowardly” firing.

He said: “Honestly, I’m not trying to be dramatic, but if that was brought up, what I’d want to do would be to get together.

“I’d want to see them, just hug it out and feel that energy that we had when we were f*****g young and hungry and all that s**t.”

Jordison continued: “They’re my brothers. We’d hug and talk and do s**t like we used to do. We used to sit up all night along planning this s**t and what we wanted to do. So that’s how I’d wanna do it.

“It’d have to be in person. If it happened, that would be f*****g awesome, but only time will tell.” (Via Metal Hammer)

Jordison never reunited with the band.

In 2016 he spoke candidly about his health, the main contributor to his firing from Slipknot.

He recalled: “I got really really sick with a horrible disease called transverse myelitis, I lost my legs. I couldn’t play anymore. It was a form of multiple sclerosis, which I wouldn’t wish on my worst enemy.”

Being axed from Slipknot spurred Jordison on to build his next band, Vimic.

“To people with multiple sclerosis, transverse myelitis, anything like that, I am living proof that you can f*****g beat that s**t.”