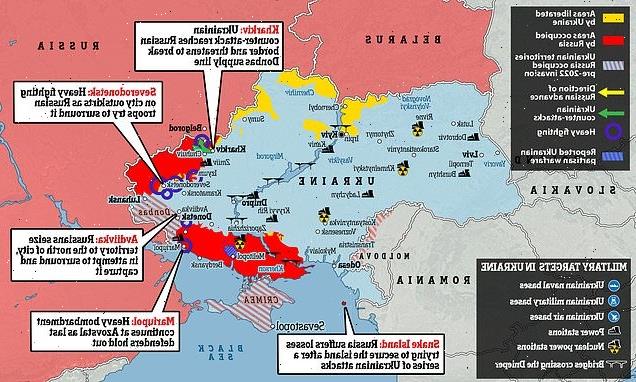 Vladimir Putin’s Donbas offensive is faltering due to heavy losses and Ukrainian resistance and may even collapse if Russia is unable to muster up significant new combat power, military expert Justin Bronk writes today.

Despite the Russian president refocusing efforts from his failed Kyiv offensive to eastern Ukraine, Russia has so far failed to make significant ground in the Donbas region.

Putin’s troops continue to be frustrated by an ardent last stand defence of Mariupol – seen as key in allowing Putin to create a ‘landbridge’ between western Russia and Russian occupied Crimea.

And while the Russian Army has managed to capture several villages along the main roads in the south and south west, and has captured the town of Popasna in the east, it is not yet in sight of its main goal of encircling the Ukrainian forces in the cities of Kramatorsk, Sloviansk and Severodonets.

Russia is also suffering heavy losses in the process. The Russian death toll now stands at more than 25,000, according to the Land Forces of Ukraine’s latest figures.

A total of 25,500 Russian soldiers have been killed in bitter fighting, while Putin’s forces have lost 1,130 tanks, 199 planes, 156 helicopters, 509 artillery systems and 2,741 armoured personnel carriers, the Land Forces claim.

The figures have not been verified by Russia, who have remained tight-lipped over their losses. Last month Russian Presidential spokesman Dmitry Peskov gave the first real insight into the scale of Russia’s war casualties, going as far to describe them as ‘significant’.

The Kremlin was also forced to admit the humiliating loss of its Black Sea flagship Moskva after it was struck by a Ukrainian missile. The defence ministry said one crew member had died and 27 were missing after the sinking, while the remaining 396 had been rescued. Previously it had made no mention of casualties.

Experts, meanwhile, believe Russian losses could be even higher than those claimed by Ukraine – as high as 60,000 when including those killed, injured, captured or declared missing.

Despite the losses, Putin did not call a national mobilisation – as some expected he would – on Russia’s Victory Day earlier this month – a move which would have allowed him to bolster his forces with reservist fighters. 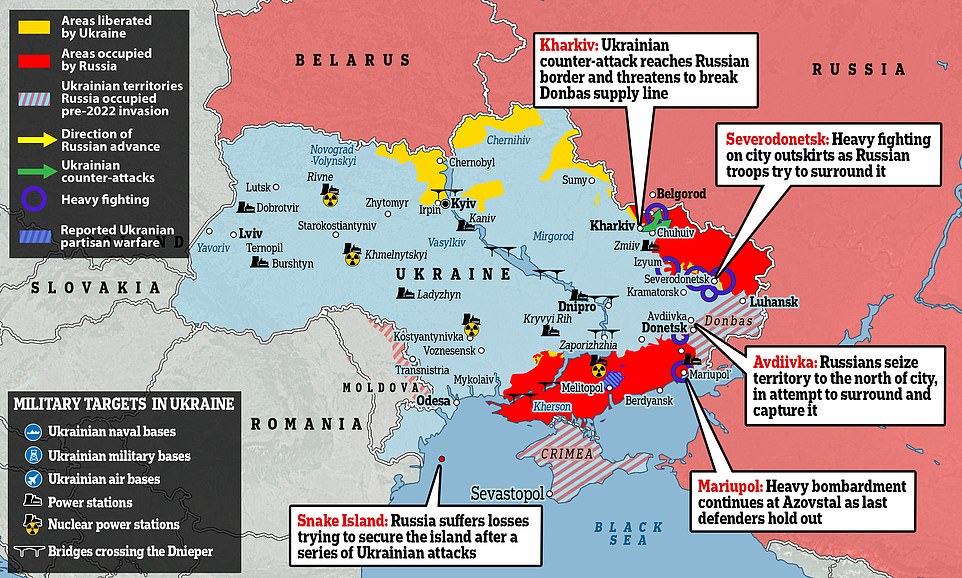 The much-anticipated Victory Day speech by President Putin in Moscow on Monday 9th May did not include a call to mobilisation, meaning Russia still cannot legally call up conscripts and reserves on mass to replace continued heavy troop losses in Ukraine.

Meanwhile Ukrainian forces have moved from local counter attacks towards more general counter-offensive operations to the east of the northern city of Kharkiv, potentially threatening to cut key Russian supply routes crucial to its push in Donbas.

Since it began the second phase of its invasion, with its forces concentrated on the Donbas region in the east of Ukraine, the Russian Army has managed to capture several villages and advance slowly along the main roads south and south west from the main staging point at Izyum in the north east, has captured the town of Popasna in the east, and has reduced the forces defending the long-besieged port city of Mariupol in the south to the tunnels and bunkers of the Azovstal steelworks.

However, it has not broken through Ukrainian secondary defence lines, and is not yet in sight of its main goal of encircling the Ukrainian forces in the cities of Kramatorsk, Sloviansk and Severodonets.

Essentially, it has made modest territorial gains that are of little strategic significance if they cannot be leveraged to facilitate a wider breakout – and it has taken continued heavy losses for each kilometre of ground taken.

When Russia began its full-scale invasion in February 2022, President Putin had massed almost 190-200,000 troops on the borders for combat operations.

These included about 150,000 regular troops and around 40-50,000 second-line ‘Rosguardia’ forces more suited to peacekeeping and riot control duties than frontline combat.

However, by late April Russia had already lost an estimated 15,000 troops killed in the fighting, according to the British Minister of Defence Ben Wallace. 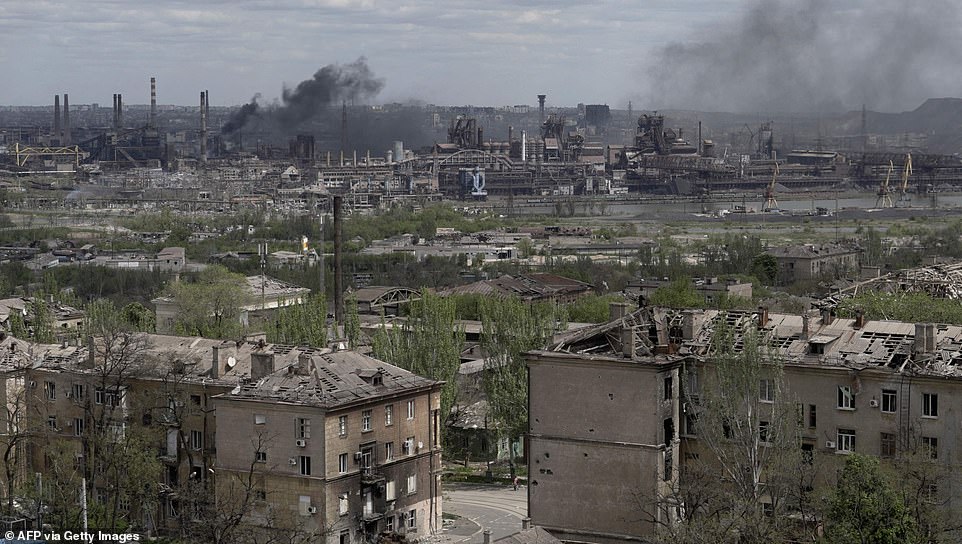 A view shows the Azovstal steel plant in the city of Mariupol on May 10, 2022, amid the ongoing Russian military action in Ukraine 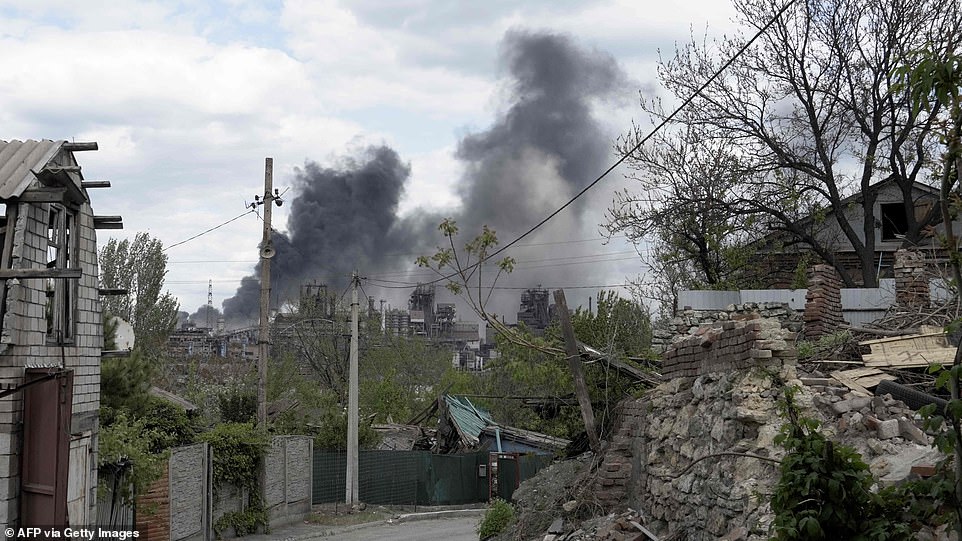 The total casualties including wounded, captured and missing personnel are likely to be 3-4 times this, meaning that after an additional two weeks of heavy fighting, Russia may well have taken somewhere in the region of 50-60,000 casualties.

Confirmed Russian vehicle losses now include a staggering 640 tanks and at least 700 other armoured vehicles.

This is even worse for Russia than it looks on paper. Each Russian battalion tactical group (BTG) has around 700-900 troops (often reinforced for combat operations with several hundred additional support troops and equipment).

Of these, around 200 are infantry and another 150 are vehicle crews for the 10 tanks and roughly 40 other armoured vehicles which make up the BTG’s mobile, offensive punch.

The tens of thousands of casualties suffered by the Russian army will be heavily concentrated in these infantry and vehicle crews, who are exposed to by far the most danger and are the key to generating combat power.

The casualties and vehicle losses therefore represent a punishing attrition rate which cannot fail to have a serious impact on the Russian Army’s ability to sustain effective offensive combat operations. 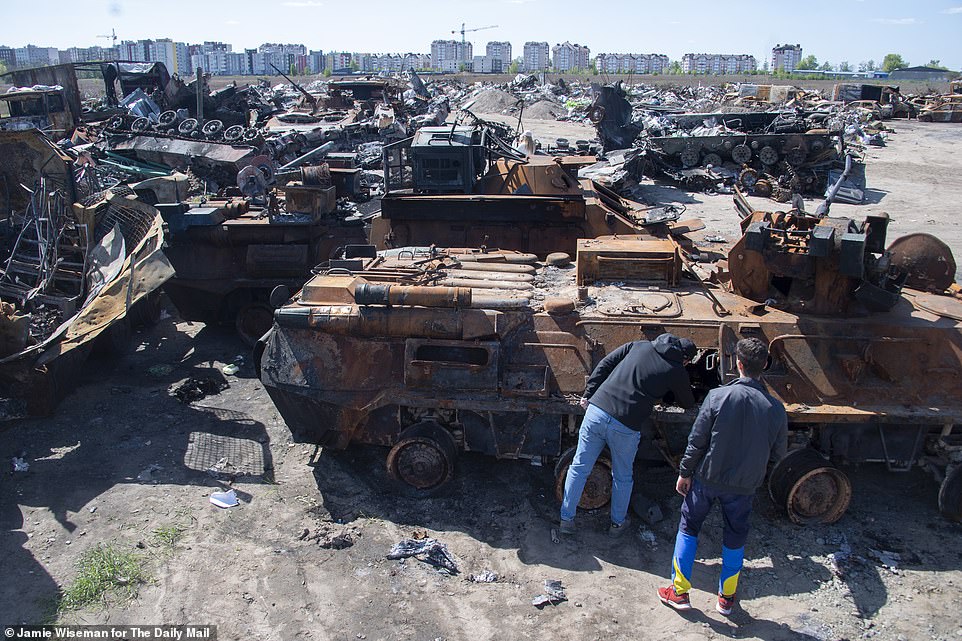 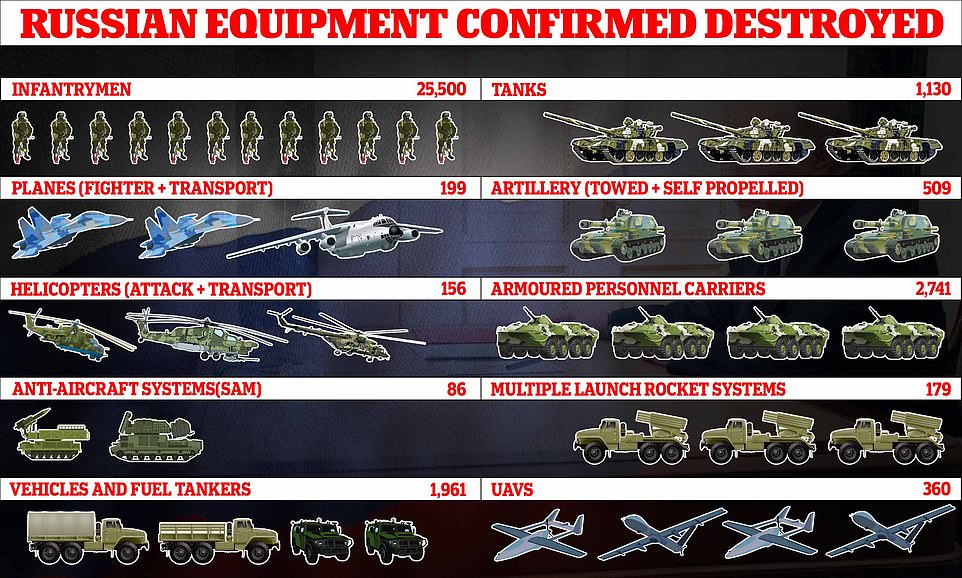 A total of 25,500 Russian soldiers have been killed in bitter fighting, while Putin’s forces have lost 1130 tanks, 199 planes, 156 helicopters, 509 artillery systems and 2741 armoured personnel carriers, the Land Forces of Ukraine claim

The lack of a declaration of war and national mobilisation is important in determining the likely path forward for Putin.

Russia sent around 120 BTGs into Ukraine and has since reinforced operations there with around 10 additional ones from elsewhere in Russia.

This is close to the limit in terms of additional regular reinforcements that it can generate to continue operations. 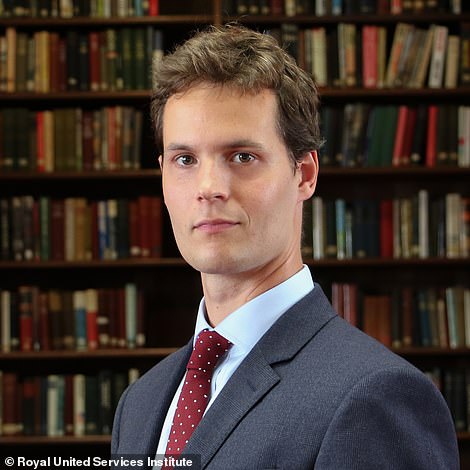 Justin Bronk, a research fellow in airpower and technology at the Royal United Services Institute in London

The Russian regular army of 280,000 is supposed to be able to generate 168 BTGs without national mobilisation, and also has to maintain forces in Syria, in its occupied territories in Moldova and Georgia, as well as on the borders with NATO in the West and China in the Far East.

Furthermore, most of the BTGs now fighting in the Donbas and Mariupol are badly understrength after months of attrition and many have been formed by merging together battered formations from previous operations around Kyiv in March.

In short, the Russian Army is getting close to its limits in terms of generating large quantities of concentrated combat power for offensive operations.

At the same time, the Russian Aerospace Forces have only succeeded in achieving at best localised air superiority in Donbas, and are struggling to employ most of their fighter force effectively against Ukrainian forces on the battlefield.

Russian doctrine never stressed close air support as a core task for fighter pilots, since the Russian Army was supposed to have enough advantages in firepower and tanks to outgun its rivals at the tactical level.

As a result, its fighter aircraft fleets lack the targeting pods, large numbers of suitable precision guided weapons and pilots trained to perform the complex task of close air support.

This picture would be bad enough for Russian commanders if the only concern was their major offensive in Donbas running out of momentum without achieving any of its major objectives, or even finishing off the defenders in Mariupol. 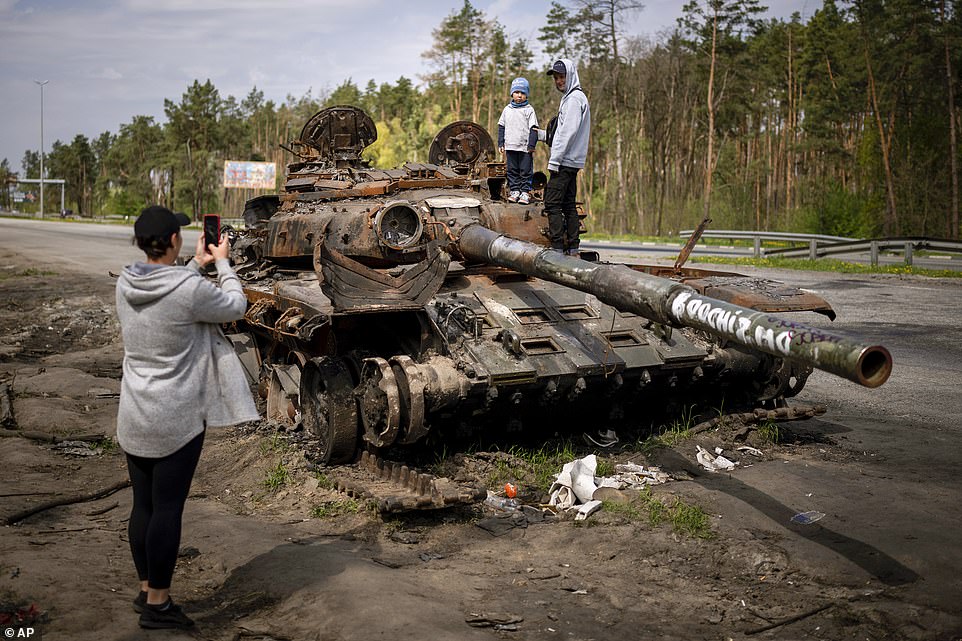 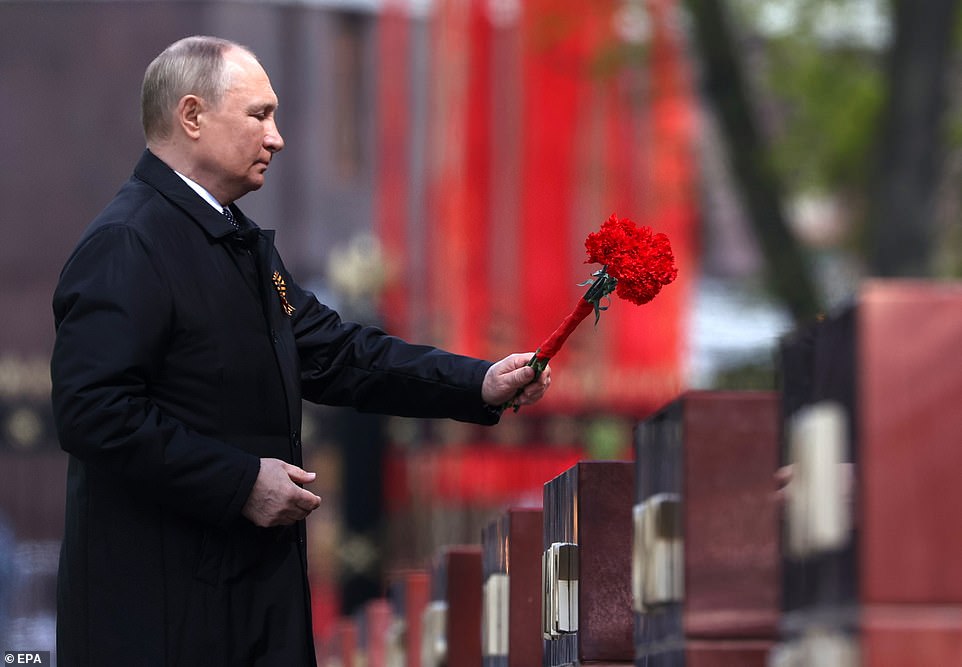 Despite the losses, Putin did not call a national mobilisation – as some expected he would – on Russia’s Victory Day earlier this month – a move which would have allowed him to bolster his forces with reservist fighters

However, there are increasing signs that Ukraine has achieved significant success in its counter offensive around Kharkiv in the north east – with multiple villages retaken and the Russian Army finally pushed away from artillery range of the city.

Meanwhile, Ukrainian counter attacks in the south west continue to threaten the Russian position at the strategic crossing point city of Kherson.

A major breakthrough by Ukrainian forces in either location could cut crucial Russian resupply and reinforcement routes along main roads and railways, and so forces which are desperately needed to try and maintain offensive momentum in Donbas are having to be redeployed to defend Russia’s flanks.

Without a massive influx of new combat power – something which the Russian Army is increasingly unable to provide – Russian leaders face the prospect not only of being unable to take the Donbas, and the failure of their second offensive phase, but of being cut off and having to retreat from hard won positions again.