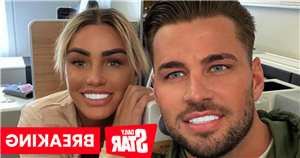 Katie Price has confirmed her split from fiancé Carl Woods after rumours abounded about the pair.

After weeks of speculation, Katie confirmed the rumours were true on TikTok.

The former glamour model Katie, 44, replied to a fan who quizzed if she and Carl, 33, had broken up.

Katie was asked by the concerned fan: "You still with Karl"

To which Katie replied with: "No".

The pair had been on and off for the past couple of years after meeting in Sheesh two years ago.

The pair had announced their engagement earlier this year and were sad to be thrilled to tie the knot.

Katie and Carl were also reportedly trying for a child together which would have been the reality star's sixth child.

Earlier this year, Carl spoke about his public persona exclusively to the Daily Star and described it as "f****ed".

"Look, I am completely and utterly loyal yeah, Katie will never have anyone as loyal as me, she just wouldn't.

He also spoke about his previous TV career and the shows he hopes to go on in the future.

The Essex lad he briefly featured on ITV's Love Island in 2016 but didn't make it to the main villa.

Cal said: I was on there for like 10 minutes, but I ain't a fame-hungry person.

Though he would love to go on ITV's I'm a Celebrity… Get Me Out of Here!

He added: "I would love to do stuff like the jungle – you can't do better than Katie in there, but to be fair I think I would be horrific in there because I would do none of that eating s***, but like tough s***, you're all going hungry.

"All of the daredevil stuff I'd be fine with though."