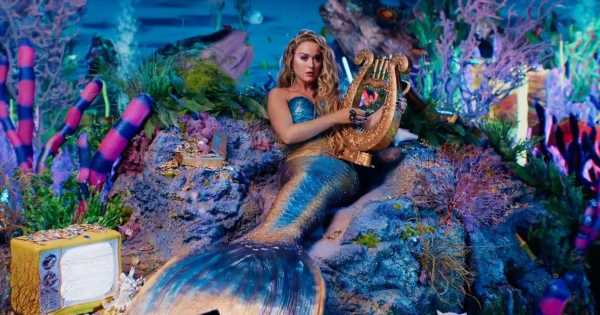 New mum Katy Perry wowed her fans as she turned herself into a mermaid as speculation she is set for a Las Vegas residency refuses to go away.

The singing sensation posted a behind-the-scenes photo for an advert she is shooting with the company Resorts World.

The 36-year-old teamed up with her fellow judge from American Idol Luke Bryan for the stunt – and it was certainly worth it.

With the full-length tail pics shot by world famous photographer Rony Alwin, hair had been done by stylist Jesus Guerrero, and her make up by Michael Anthony.

The star can be seen lying back, showing off her fishy tail to the world.

It featured Katy lounging on folding chairs and crates of LED lights in her stunning glitzy ocean outfit.

She completed her look with perfect mermaid beach waves.

It all looked very realistic and the Disney fan clearly took some inspiration from The Little Mermaid character Ariel.

The star-studded ad also featured appearances from Celine Dion and Carrie Underwood, as well as DJs Tristo and Zedd.

There's no doubt her daughter will enjoy seeing mummy dressed up as a mermaid.

Carrie Underwood and 'Queen Of Vegas' Celine Dion also starred in the ad.

Billboard has already reported that Perry is planning a residency at the new resort for this year and next year.

She may have to asking Celine for her advice after many months performing.

The incredible vocalist had a 16-year residency in Las Vegas before deciding to call it a day two years ago.