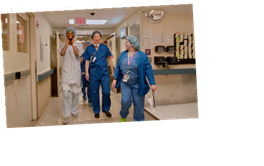 Kino Lorber is planning to release the documentary in virtual and physical cinemas on Nov. 18, followed by a roll-out on KinoNow.com and home video.

“Born to Be” follows Dr. Jess Ting, a plastic surgeon at the Mount Sinai Center for Transgender Medicine and Surgery in New York City. Through his pioneering work, Ting is giving transgender and non-binary people access for the first time ever to quality transition-related health and surgical care.

In the documentary, Cypriano tells the story of Ting, a Juilliard-trained bass player-turned-surgeon and that of his patients, who come to him from all walks of life and whose diversity reflects the multiplicity of communities that make up New York.

“Born to Be” explores the complexities of gender, as well as key issues around the human right to define gender for oneself. The documentary also sheds light on the limitations of Ting’s groundbreaking surgeries, and his commitment to growing this new field being tested.

Variety‘s Owen Gleiberman described the documentary as “moving and fascinatingly forward-looking,” and said it “shows us what the future will look like.”

“’Born to Be’ is an eye-opening look at gender affirmation surgery that people both inside and outside the transgender community will appreciate,” said Kino Lorber SVP Wendy Lidell, who negotiated the deal with Submarine Entertainment’s associate director of sales Ben Schwartz on behalf of producer Michelle Koo Hayashi.

“Dr. Ting is not only a brilliant surgeon, but a compassionate human being. The filmmakers understood this and the result is a deeply emotional experience,” said Lidell.

Cypriano said, “I’ve always admired Kino Lorber’s commitment to documentaries and LGBTQ history so I’m thrilled that they will be releasing ‘Born To Be’ to audiences at this most critical time.”

“When a government is complicit in this by trying to eliminate protections from discrimination against LGBTQ people in health care services, it is also denying a basic civil and human right,” said the helmer, adding that “transgender and non-binary people face hate and discrimination every day.”