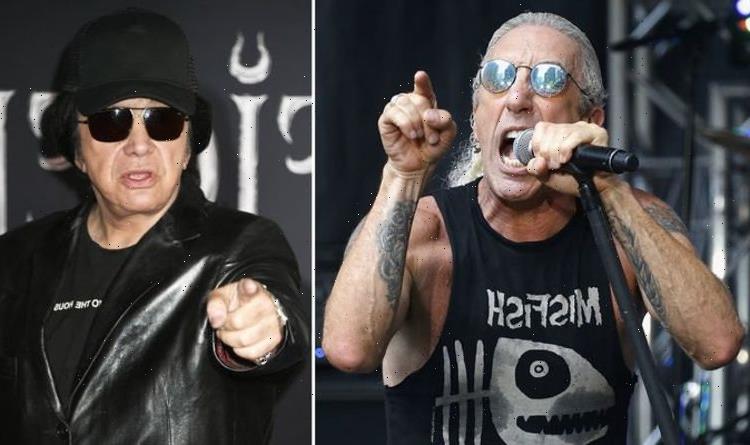 Simmons loves to make grand declarations, usually about his own band or himself. But now he has found himself in a war of words with another fellow heavy metal icon after Snyder opened fire on him in a new interview. The Twisted Sister frontman was discussing the current state of rock music when he suddenly turned his attention to the KISS star, who is currently promoting the relaunch of his band’s interrupted End of the Road World Tour.

Twisted Sister remains best known for the 1984 album Stay Hungry, which spawned the timeless hit We’re Not Gonna Take It. They also famously took the metal band look of big hair and make-up to extremes, usually with great humour, although Snyder has rejected being called ‘glam metal’.

Twister Sister completed their own farewell tour in 2016, while Simmons and fellow KISS founding member Paul Stanley have declared that they will retire after the current tour.

Simmons has been very vocal in his assertion that the great era of rock and metal music is over, with no new stars to replace the previous legends.

In a new interview with Appetite For Distortion, Snyder hit back at Simmon’s oft-quoted declaration that “rock is dead.”

He said: “Nothing makes me crazier than the words ‘rock ‘n’ roll is dead.’

“When Gene Simmons says (he puts own an imitation of Simmons’ voice), ‘Let me tell you something, there’s no Bob Dylans or Jimi Hendrixes…’ No, you’re just not looking.”

Snyder credits his for children with keeping him tuned into the latest bands: “They have kept me aware of not only that there’s new music but there’s great music… The talent and passion (is out there)… because it’s pure passion now.

“These young kids don’t have a hope of getting rich doing it. Their best hope is that maybe we make enough money selling CDs and t-shirts after the show to get to the next fucking gig.

In fact, it is not quite so cut and dried. Simmons has never denied or changed his frequent assertion that “rock is dead” but he isn’t actually denying that the talent is out there, he is saying something quite different.

Simmons, like many famous musicians, publicly believes that the business model of record companies no longer serves or invests in the rock music community, and singer-songwriter musicians.

In March this year, he told Heavy Consequence: “Rock is dead because if we play the game from 1958 until 1988, which is 30 years, you had Elvis, The Beatles, The Stones, Pink Floyd, and on and on and on. And you can go to the heavy part of it, which is Metallica, Maiden, if you want to put KISS in there, that’s fine. AC/DC, on and on and on. Even U2, Prince, Bowie, Eagles. And then you get to disco stuff, and Madonna, and that stuff, and Motown, of course. And then from 1988 until today, who’s the new Beatles?”

“I’ve heard a reaction of Foo Fighters, one of my favorite bands, but you’re kidding yourself. There’s also the boy bands: NSYNC, One Direction, BTS, and [sarcastically] XYZ, PTA, and good for them that they’ve got success. Don’t kid yourself. As soon as those girls are gonna grow a little bit older, that’s going to go away. It’s like sugar: you taste it, it gives you that little energy boost, and then it’s gone forever and you don’t care.”

Simmons made a heartfelt plea for music fans to go out and support new bands and live shows.

He added: “Rock is dead — you bet your ass it is — not because the talent isn’t there, but because the business model (of streaming music) just doesn’t work, and so that leaves live performances. And I really hope… that people go out to the local clubs and see all the new bands and support new bands…

“It’s not going to affect me. I make a living, but the new bands need the love and attention. Don’t just go see Metallica and Taylor [Swift] or KISS. On the weekends, go to a place that’s got live music. And I don’t mean guys that press a button and do EDM. That’s fine, too. But that guy, if you put an instrument in his hands, wouldn’t have a clue what to do with it — never wrote a song, wouldn’t know what an A minor, A major or a seventh is. You need to support the new generation of talented people who are musicians and writers and so on. Don’t let the robots take away everything.”