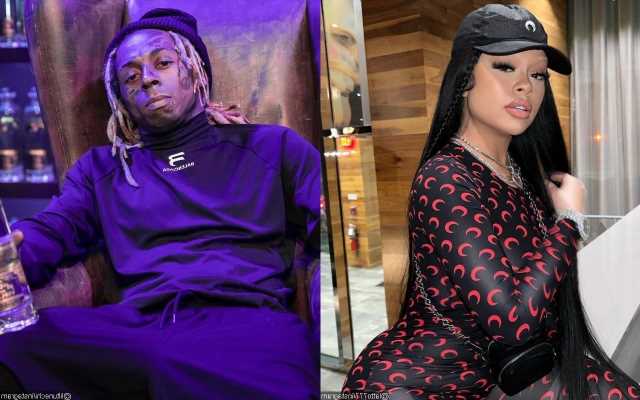 Taking to her social media platform, the ‘B***h From Da Souf’ femcee sarcastically stresses that she never requested to sample the ‘A Milli’ rapper’s 2008 hit track.

AceShowbiz -Latto (Mulatto) is setting the record straight. The “Big Energy” hitmaker has debunked rumors that Lil Wayne once turned down her request to sample his 2008 hit track “Lollipop” featuring Static Major.

On Sunday, October 23, HITS Daily Double reported that “Lil Wayne has denied Latto’s requests to sample his 2008 hit ‘Lollipop’ in upcoming single.” Also reporting the news was PoeBase via Twitter.

Upon learning of the post, Latto didn’t waste time to clarify. The 23-year-old raptress, whose real name is Alyssa Michelle Stephens, tweeted, “POV: u don’t even have a song sampling lollipop,” adding a slew of laughing with tears emojis.

Latto recently made headlines due to her feud with Nicki Minajthat stemmed after Nicki’s complaints over her “Super Freaky Girl” song’s categorical placement for the 2023 Grammy Awards.

Responding to Nicki’s social media rant, Latto wrote via Twitter, “Damn I can’t win for losing… all these awards/noms I can’t even celebrate.” A few hours earlier, it was announced that the “B***h From Da Souf” femcee received multiple AMAs nominations, including “Big Energy” for Favorite Hip-Hop Song.

Later, it seemed the two attempted to discuss things privately. However, things got heated after Nicki posted a screenshot of an apparent message Latto had sent her. In the text, Latto asked Nicki to stop dragging her name while voicing her displeasure. In response, Nicki called Latto a “Karen.”

A few days later, it’s unveiled that despite Nicki’s “Super Freaky Girl” not being listed in Rap categories, her name is listed “five times” in Rap categories. Recently, Nicki also made it clear that she would still attend the 2023 Grammy Awards.

“Yeah, why not? I’m not a coward,” Nicki told E! News. She further explained, “I feel like I am in a really good space and therefore, why not? Why not put on a beautiful dress and cover my big boobs and show off my big old butt. Why not go and flaunt it?”