Prime Minister Scott Morrison was under pressure when he delivered his speech to 40 world leaders at US President Joe Biden’s climate summit last week. Unlike many of our major trading partners – including the European Union, UK, US and Japan – Australia had no ambitious emissions reduction goals to announce. 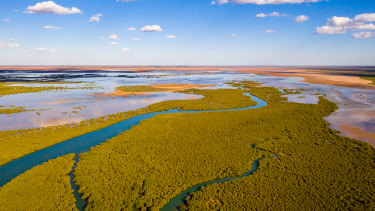 Greenhouse gas sequestered in marine vegetation is the focus of a new government fund for blue carbon, which will support ecosystems like the mangroves in the Exmouth Gulf, Western Australia. Credit:Andre Rerekura

Mr Morrison instead promoted his commitment to practical measures, and he singled out blue carbon, which he said can deliver outcomes in Australia and for our neighbours in the Pacific.

The government’s blue carbon fund will invest $19 million in restoring lost mangroves and wetlands in Australia, $10 million to support similar projects in developing countries most likely in the Pacific, and $1 million to develop a carbon accounting method to be banked against a country’s emissions reduction targets.

“These mangrove environments are often referred to as the lungs of the ocean. Some might even call them the liver of the ocean in the cleansing impact they have,” Mr Morrison said after the summit.

In Australia and elsewhere, estuaries and coastal wetlands have been replaced by engineering and infrastructure. They’ve been filled in, drained off and dug up to make way for agriculture and urban development.

Millions of hectares of mangroves, salt marshes and seagrasses have been lost, taking with them invaluable fish and bird nurseries as well as buffer zones against storms, coastal erosion, even future sea level rise.

However, Dr Friess said environmental projects cannot be used by governments as a “get out of jail free card” on climate action.

“At the end of the day we need to be realistic about how much any nature-based solution can do,” he said. “It’s no excuse to not do other things, namely decarbonising the economy.”

University of Wollongong Associate Professor Kerrylee Rogers said Australia was in a “unique position” to restore vast areas of coastal habitat which had been blocked off from the ocean with tidal barrages and drainage.

Unlike many places much of Australia’s coastline is untouched by urban development.

“There’s been a lot of wetland drainage and flood mitigation put in for agricultural purposes, and we are seeing they are no longer viable for farming,” Dr Rogers said. “They have been disconnected (from the ocean) and the substrate is changing which means they are sinking lower and lower. They are a prime opportunity for conversion with blue carbon.”

About 14 million hectares of mangrove forest remains around the world, and it could be the most effective mitigation tool for island nations facing inundation from rising sea levels.

Helping to restore them could be an effective diplomatic tool for Australia which, with the federal government promoting a gas-fired recovery, has been the target of angry calls for climate action from Pacific leaders.

“While blue carbon has become something of a buzzword, it is critically important … in the fight against climate change,” Ms Ley said.

He said environmental sequestration can deliver up to 30 per cent of the carbon abatement required to limit warming to 1.5 degrees celsius.