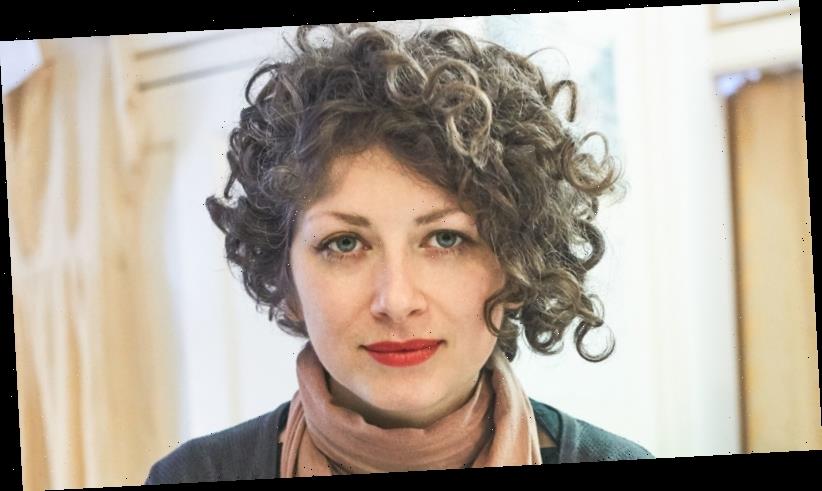 Vintage dresses hang on one side and on the other is a rack of exquisite floor-length gowns, some with magnificent trains. Antique chairs and furniture adorn the room including a wooden side cabinet with glassed doors housing blocks of colourful fabrics that inspire a sense of creative possibility.

A good chunk of the room in London's Bloomsbury is taken up by an enormous dressing-cum-fitting room fashioned out of elegant curtains.

Atelier Tammam exudes an air of belonging to a posh grandmother, the kind who wore original Chanel. 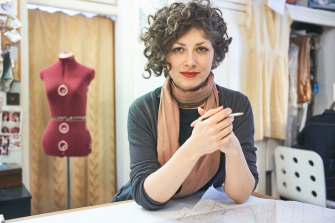 It is as far away from the brightly lit stark, minimalist boutiques on New Bond Street as Tammam herself is as devoid of the pretentiousness that never seems far away from those on top in the fashion world.

But this is to be expected. Tammam, 37, has always proudly set herself apart from the crowd in word and in deed.

"I was nine when I turned vegetarian, I was probably about 18 when I turned vegan, and I was really hardcore vegan for about seven years but then I got the seven-year itch," she explains, her warm smile dominating her face, framed with her trademark untamed curls.

"I'm certainly still vegetarian and I truly believe that we should respect animals and really we need to be careful about the way we treat everything in this world."

Tammam's role model in life is Swampy, a UK eco-warrier who rose to prominence in the '90s staging sleep-ins in trees destined to be felled for road expansions.

By her account, he was a "dreadlocked dirty hippie" who inspired her to wag school to join protests.

"I was very much at a young age an animal rights activist, an environmental activist. All the kids at my class had Take That on their folders and I had Swampy." 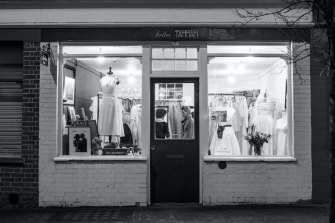 When Tammam studied at the world-renowned London arts and design college Central Saint Martins, she pushed for the industry to take up recycling and environmentally-friendly policies then.

"I was laughed at and I was told no one cares about that," she recalls. "And now it's massive."

The environmental blight of fast fashion is under the spotlight like never before, stemming in part from the 2013 collapse of the Rana Plaza factory in Dhaka, Bangladesh, which exposed to the world the human costs of our love affair with cheap new clothes.

Since then, Australia has followed the UK in introducing modern slavery laws which force companies to examine and declare their supply lines free of slavery, and environmentalists have had greater success in illuminating the environmental toll of the production of the 100 billion garments estimated to be made per year. 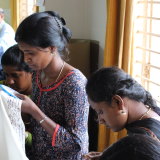 The designer has trained artisan women in India and Kenya in haute couture techniques.Credit:Courtesy Lucy Tammam

Add to this the recent awareness campaign around plastics, spearheaded in part by the beloved British naturalist David Attenborough, which means many modern ways of living are being shunned in favour of practices adopted from the times to which Tammam’s fashions pay homage.

But when she started her own label in 2007, the concept of ethical clothing was so exotic, Tammam’s designs were wrongly branded "ethnic".

"I very quickly stopped using even the term ‘ethical’ because it sort of became a bit of a dirty word and people would associate it with kind of hempy, hippie, very unattractive-styled stuff because before I started my label there weren't any labels, any fashion companies doing anything trend-led or attractive or stylish."

I quickly stopped using even the term ‘ethical’ because people would associate it kind of hempy, hippie, very unattractive-styled stuff.

Fast forward and Tammam is a quiet success with her sustainable fibre-to-finish couture model.

She uses two fabrics – cotton and "peace silk" (where the moth can fly from its cocoon instead of being killed) – and has personally visited and verified the practices where her fabrics are grown.

Her environmental stance means she does not use or wear any fur or leather, although she is finding the latter difficult as most animal-friendly fake leather or pleathers are plastic – her “biggest avoid” when it comes to dressing sustainably.

"Polyester or any kind of synthetic plasticky, petrochemical, plastic material is so bad for the environment in its production and its afterlife. It looks horrible, it feels horrible so there's so many reasons not to buy polyester; I think it's a hideous fibre."

But Tammam says the price is the point.

"That's the thing, it's an investment piece, if you want something from my Atelier you have to save up for it. There is a lot to be said for how things used to be done.

"You probably get the vibe in here, you walk through the door and it does feel like stepping back in time, it's like going back to the 1950s or even earlier to a time when you could come in and have that little bit of luxury when having your dresses made was an experience and something people really looked forward to and saved up for." 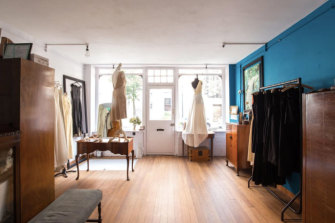 Atelier Tammam is like stepping back in time.Credit:Courtesy Lucy Tammam

This investment means customers are more likely to treat their bespoke dresses as a lifelong piece and get it repaired rather than replaced.

While admittedly Atelier Tammam is not for those who love a high-street bargain, she says she is seeing a steady stream of people coming back not just for her designs but with their existing clothes which she and her team can repair or redesign, rejuvenating pieces that might otherwise have gone to landfill.

Which is where One Dress, her daring political project bringing together her activism, feminism, design, art and fashion, more than four years in the making, comes in.

The inspiration for One Dress was typical for a fashion designer – fashion week – but the outcome was antithetical.

"I just got so disillusioned, I was looking at these really beautiful designs walking down the catwalk so quickly that you couldn't even see them and I just thought 'bloody hell, why am I creating more with so many designers creating so much all the time?'"

I just thought 'bloody hell, why am I creating more with so many designers creating so much all the time?'

But how was Tammam to square her environmentalism with her equal passion for design?

"I can't stop creating. I didn't want to be part of the problem but this is my life, I love designing, I'm a creative, I want to make clothes, I enjoy it, I live for it, I've built my whole life on it."

And so One Dress was born. A single garment that would take the effort put into an entire collection that would showcase her driving values.

One Dress, which is displayed in the window of Atelier Tammam during my visit, is a spectacular recreation of the Edwardian gown worn by suffragette Christabel Pankhurst.

The skirt will be embroidered in the suffragettes' violet to the waist with words that represent feminism. Customers are encouraged to forgo a new dress and buy a word to be embroidered, by women artisans in India and Kenya instead. Women have dedicated words to mothers, sisters and friends who have died. 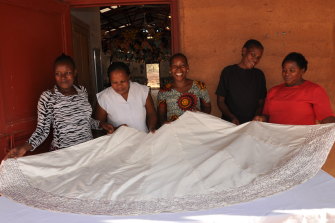 One Dress is financed by customers who have been encouraged to forgo a couture purchase to fund the project, created by artisan embroiderers.Credit:Courtesy Lucy Tammam

"Once it's done I've got a selection of very inspirational woman who are going to wear it and be photographed in it by female photographers and I'm hoping to get it on a red carpet at some point as well, that would be pretty cool," she says.

It’s natural to envision One Dress eventually finding a permanent home in London's V&A design museum. Tammam had hoped to bring the dress to Australia this month for the third Sherman Centre for Culture and Ideas 10-day Fashion Hub but the international component of the hub has been postponed due to coronavirus. 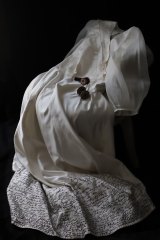 The gown is a re-creation of one worn by feminist Christabel Pankhurst.Credit:Courtesy Lucy Tammam

Partially made, the dress toured Sydney and Melbourne in 2018 it is hoped will return later this year to make its debut as a complete work. "I wanted it to be a global project," she says.

Mind you, her trip back to Australia, even if to spread the word on sustainable fashion, poses a dilemma.

“I do feel guilty about getting a plane to Australia, I really do," she confides. "I’m doing more than most people but at the same time that flight is contributing in the wrong way."

It’s a quandary familiar to many celebrity campaigners who are blasted as hypocrites. Tammam points to the recent example of Harry and Meghan being savaged by the press when it emerged they took private jets to holiday abroad.

"They come and talk about environmentalism but they're in private jets and you just think … all the celebrities have a lot of money and they fly everywhere in a private jet and they preach being sustainable but they're not personally – that lifestyle isn't really sustainable is it, so you know – hypocrisy."

Which brings the conversation full circle – how compatible is an ethical lifestyle with modern living as opposed to the slower pace of our grandmothers' time?

"We can't stop progress and actually I think travel is the most important thing people can do because you see other cultures and you learn how other people are living, and if I hadn't gone to India when I was 20 years old and seen the poverty there and seen sweatshops and understood how bad the fashion industry is, then I wouldn't be doing what I’m doing today because I would be oblivious as well."

Tammam’s solo trip around India 17 years ago only cemented her pioneer and trend-setter status, but ironically, the very values she’s worked so hard to make not just sustainable but desirable may end up costing her because of the rise the no-buy movement.

This, she says, is not the solution either. 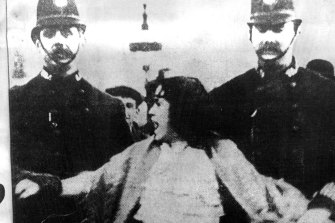 Feminist Christabel Pankhurst is led away by a London policeman.

"The way the market is at the moment people who care about sustainability have said 'I'm not buying anything', which is a shame because you've got all these fantastic sustainable designers now who've got these brilliant businesses with generally pretty good supply chains, so we're the people who are going to suffer because of this trend because people who are buying high street are still going to buy high street."

"People need the fashion industry for their livelihoods and while there are far too many clothes in existence at the moment, clothes don't last forever, they can't, so are all those skills going to be lost by that point?

"A lot of the skills that people have are incredible and handed down from generations and learnt with a lot of dedication and I think it's a shame to forget about those."

"We need to find ways to keep those going and keep the craft of fashion alive."