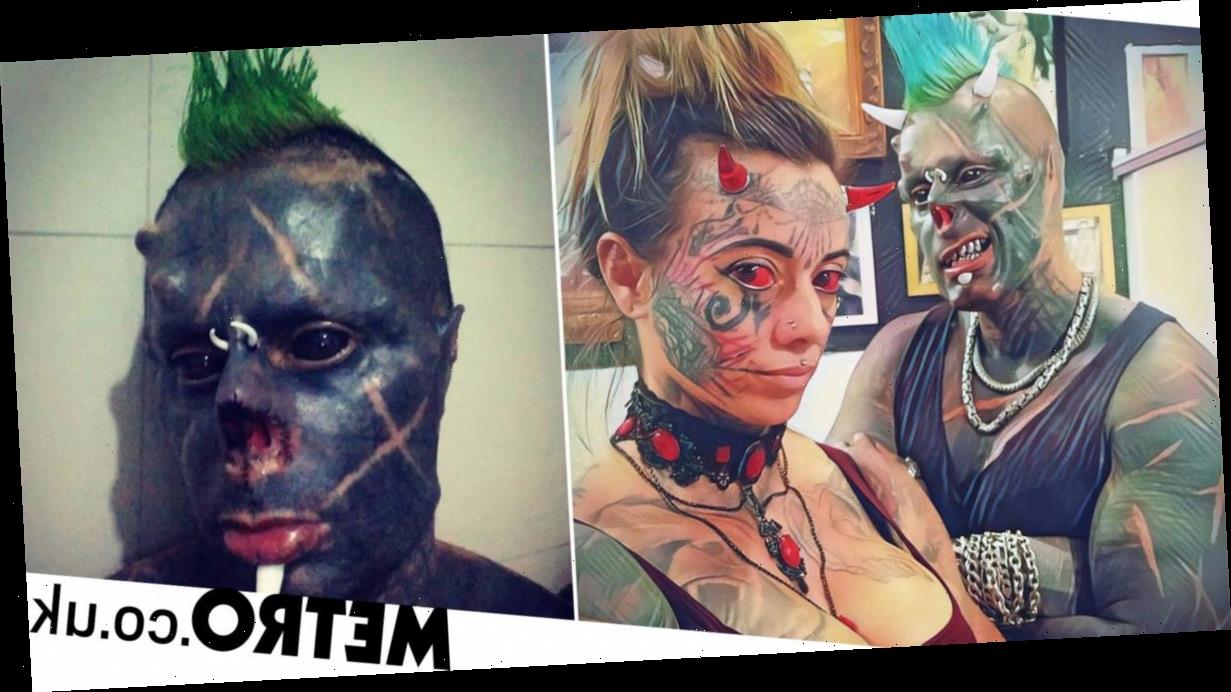 Michel Faro do Prado, 44, from São Paulo, Brazil, has been dubbed the ‘human Satan’ due to his out-of-this-world appearance and many body modifications.

The most extreme of these is probably his nose, which he had removed and stitched up recently.

Michel shared photos and videos to his Instagram account, @diabaopraddo, displaying a gaping hole in his nose alongside devil horns and tattooed eyeballs.

It is unclear exactly what procedure Michel underwent to remove the large chunk of his nose or where it was performed. Furthermore, the risks or health complications of such a procedure is unknown.

Michel’s wife, who specialises in body modifications, and has also helped him in achieving his unique look, claims he is ‘only the third person in the world’ to have completely removed their nose.

Speaking to Jam Press, Michele said: ‘I have been a tattoo artist for 25 years, most of my tattoos I get from tattoo artists and professionals who I have paid.

‘I focus on blackwork and brutal tattoos, which are types of tattoos where you ink a large part of your body.

‘But my wife has specialised in the area of modifications and the idea is for me to become her masterpiece when it comes to tattooing!’

Unsurprisingly, Michel has a high pain tolerance and said he doesn’t mind enduring more pain to achieve the body he desires.

He said: ‘Actually I have a good resistance to pain, I don’t think anything is so painful, I suffer a lot more in the post-procedures than at the time,

‘And the truth is that there are changes that without anaesthesia would be almost impossible to be done, I would love not to feel any pain.

‘But if I have to feel pain, to achieve what I want, for sure I will face it!’

Despite his rather dramatic appearance, which has prompted some people to compare him to the devil, Michel is an active member in his church community and often goes around preaching the word of God and conveying the message of the Bible.

He said: ‘People who have never seen me before are shocked most of the time.

‘I am a very well-known person and not only for my appearance, but also for several videos I make passing a message and speaking from my point of view, addressing various topics like God and the Bible, society behaviours, ect.

‘I believe in who I am – my family and I are loved by the majority.’