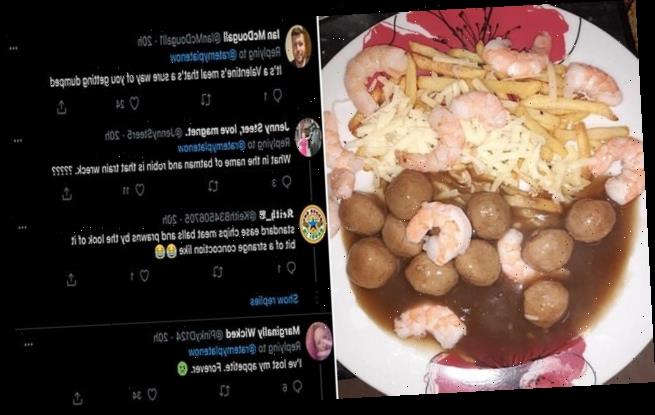 Boyfriend’s ‘train wreck’ Valentine’s Day dinner of prawns, meatballs in gravy, chips and cheese is branded a ‘sure way to get dumped’ by disgusted food lovers

Most people shower their other half with flowers, chocolates or other sweet treats on Valentine’s Day.

But one British boyfriend’s attempt to show his beloved he cared with a romantic meal has been branded a ‘trainwreck’ on social media, with one person remarking the dish was a ‘sure way to get dumped’.

Michael’s bizarre dinner consisted of prawns, meatballs in gravy, and chips and grated cheese, all served together on a floral plate.

A picture of the meal was shared to the Twitter page Rate My Plate, where people share their culinary efforts to be judged by other food lovers and amateur cooks. 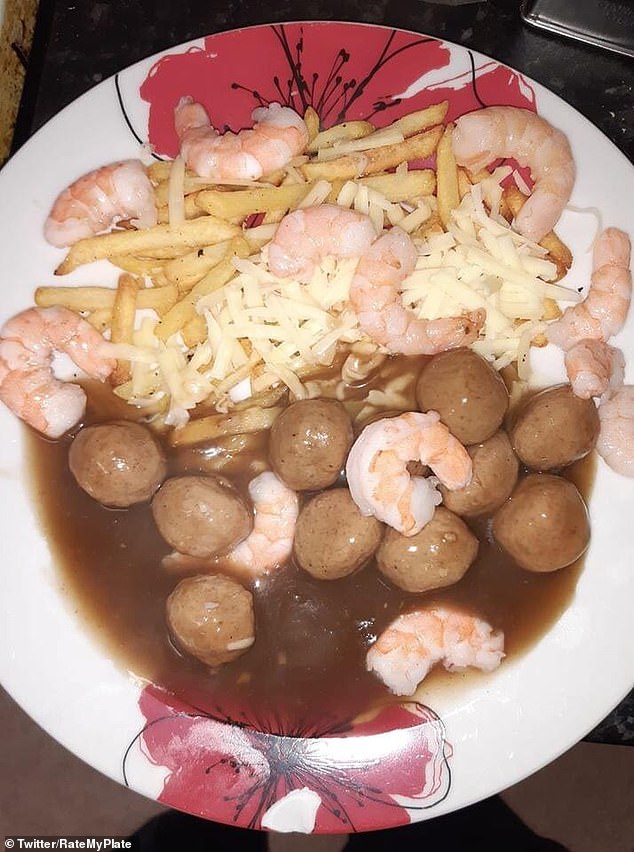 A man, known as Michael H, cooked a ‘train wreck’ Valentine’s Day meal consisting of prawns, meatballs, chips, gravy and cheese, which was slammed as a ‘sure way to get dumped’ on Twitter

The snap was captioned: ‘Late Valentines Meal – Prawns & Chips with Meatballs in Gravy and some Cheese by Michael H.’

The unusual Valentine’s Day dish caused outrage among some Twitter users, one of which described it as ‘hateful’, while someone else suggested Michael should ‘never be allowed near a kitchen’ ever again.

One horrified user said: ‘That’s the worst rate my plate I have ever seen.’

Another wrote: ‘What in the name of Batman and Robin is that train wreck?????’

And a third angrily penned: ‘People get put away for less. Michael H should never be allowed anywhere near a kitchen again. Or a plate. Or cheese. Or prawns. Or French Fries, because those are not chips. Or a supermarket, for that matter.’ 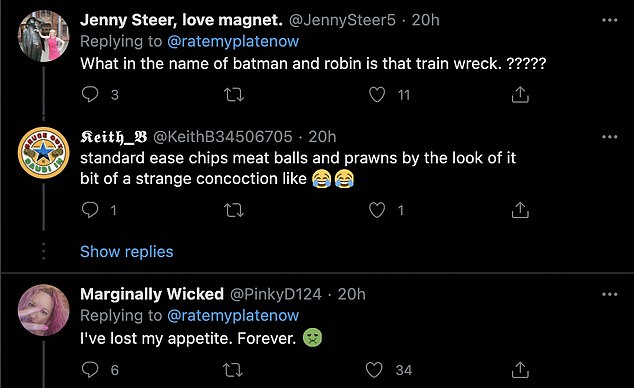 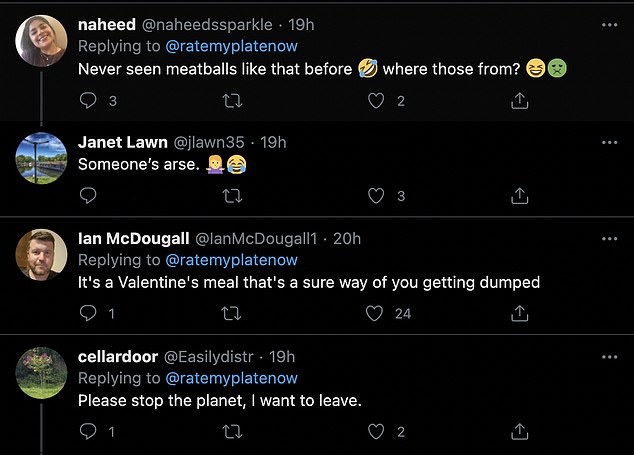 The unusual Valentine’s Day dish caused outrage among Twitter users (above), with one describing the dish as ‘hateful’ and one said Michael should ‘never be allowed near a kitchen’ ever again

One person commented on the unusual looking meatballs, which vaguely resembled royal potatoes, saying they have ‘never seen’ any like that before.

Meanwhile other food lovers were horrified that Michael had served the dish to his loved one for Valentine’s Day, saying it was a ‘sure way to get dumped’.

One Twitter user remarked: ‘A hateful dish served on a day that’s supposed to be about love.’

Another wrote: ‘It’s a Valentine’s meal that’s a sure way of you getting dumped.’

While a third commented: ‘Hope she didn’t get dressed up and do her hair for him to cook that dog’s dinner, lol!’