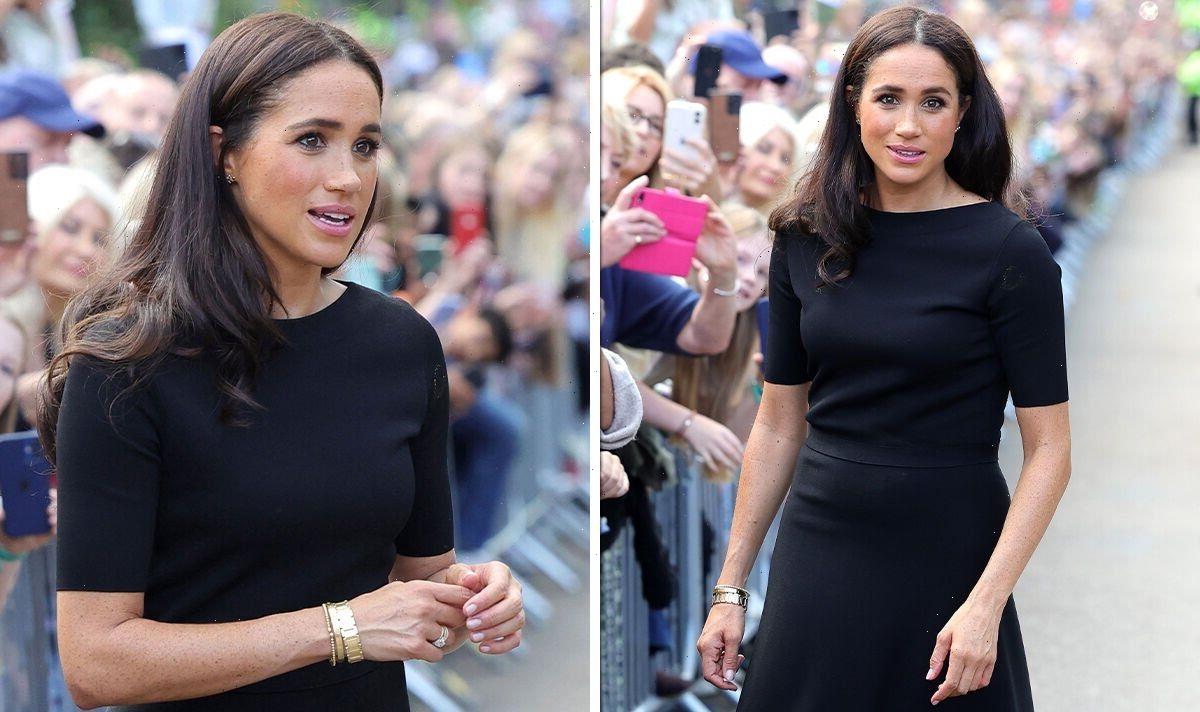 Meghan Markle appears to be ignored by member of crowd

Like Kate, William, and Harry, Meghan conversed with the crowd at Windsor and even hugged some fans.

However, not everyone seemed pleased to see the Duchess of Sussex.

One woman, dressed in navy blue and with her hair in a ponytail, was seen dropping her had to avoid Meghan’s eye line.

She then looked at the woman next to her and smirked, shaked her head, and laughed. 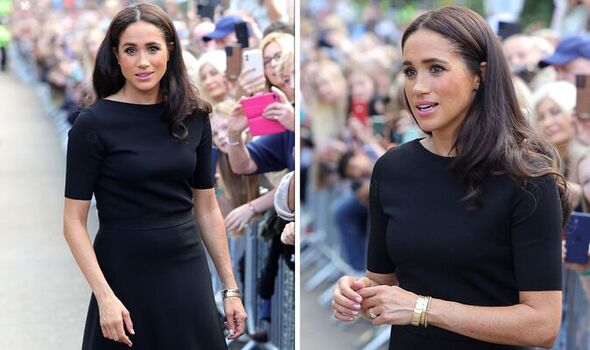 Although the woman was clearly being rude towards the Duchess, a body language expert claimed Meghan handled the situation well.

Judi James said: “It’s a tough call to be ignored close-up in public like this, and having the offer of a handshake refused will add to the sense of rejection.

“But Meghan seems to draw on her experience as an actress to minimise the impact as elegantly and calmly as possible.”

Judi noted that there were others in the crowd who didn’t look too happy to see Meghan either. 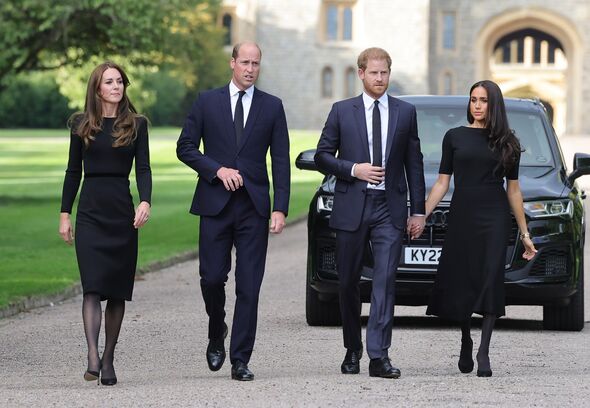 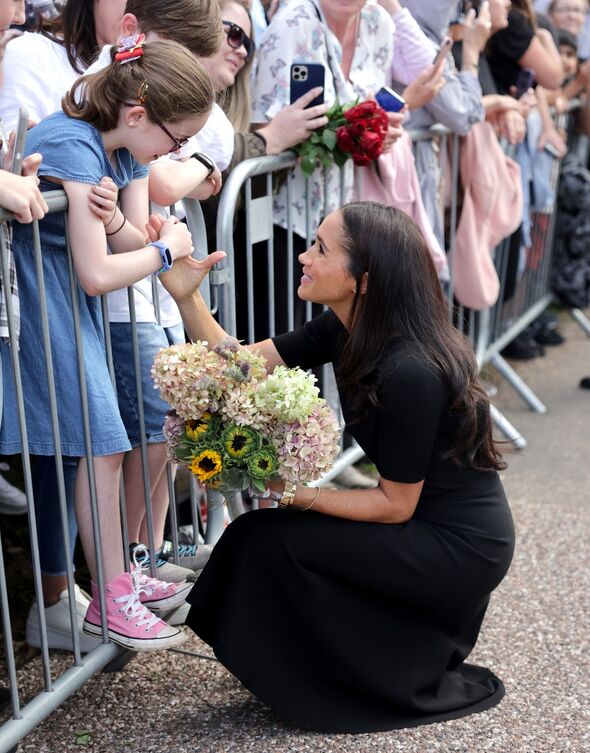 She continued: “The reaction of the crowd looks patchy.

“Some extend hands and presumably messages of support. Others just look, and some, like a couple of women in this clip, actively blank Meghan.”

However, after being snubbed, the Duchess continued along the line of people, shaking more hands and smiling at more faces.

She said: “There’s a rhythm to doing a crowd and this would break it, which can cause more body language problems.

“Meghan touches the arm of another woman, shakes with the one next to her, but then manages to avoid turning a snub into a drama by picking that rhythm up again with people who are extending a hand and barely missing a beat as she does.

“There’s no sign of a negative response from Meghan and this would be important as it could go either way.

“In a group, one dissenter can become contagious or the rest of the group can become sympathetic as they seem to here.”

Other eagle-eyed fans acknowledged the woman in navy blue’s rudeness, and shared their thoughts on social media.

One Twitter user posted the clip of the snub, with the caption: “Lady in the blue having none of it.” 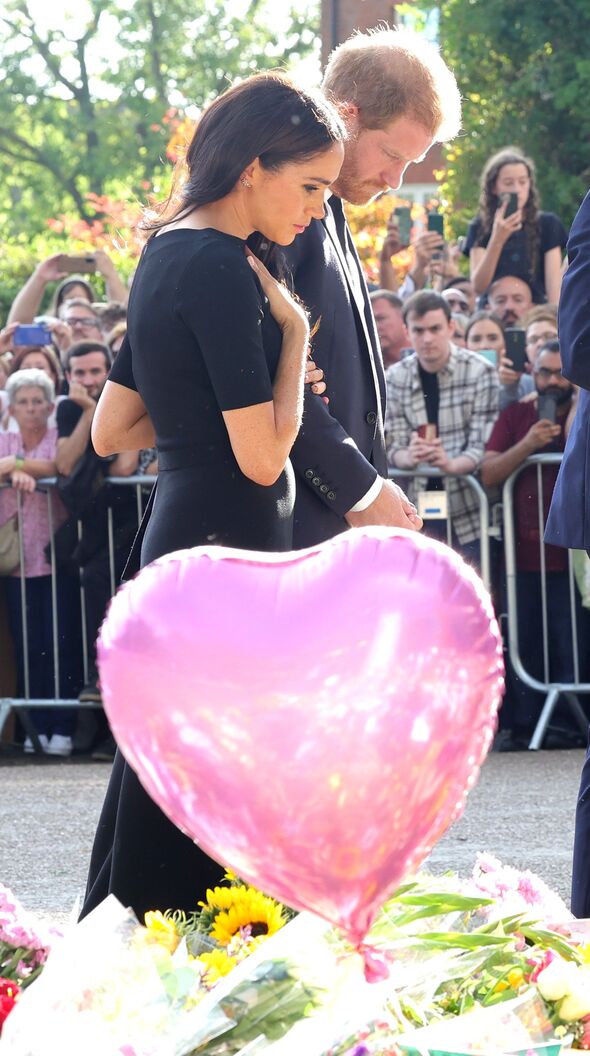 User @CarmenGranddau1 wrote: “This woman did not have to show up. That country has abused her so terribly. Meghan has the heart of a lion. Prince Harry is lucky.”

User @MummySparkles78 commented: “Believe me we’re not all like that, lots of us love Harry and Meghan.”

Some royal fans noted Harry and Meghan’s general body language. The couple left their vehicle and walked towards the crowds while holding hands.

User @evie778 said: “You can see the love and respect they have for each other, especially when photographed with the other married couple. These two are always touching each other. William and Catherine never really are.”

User @Agabawawa_3232 wrote: “You noticed they were holding hands when they walked in the road in and the other guy and his wife walked five feet apart? Body language is everything.”

User @lindar_lou added: “This woman would walk into the lion’s den with Harry. I love their love.”