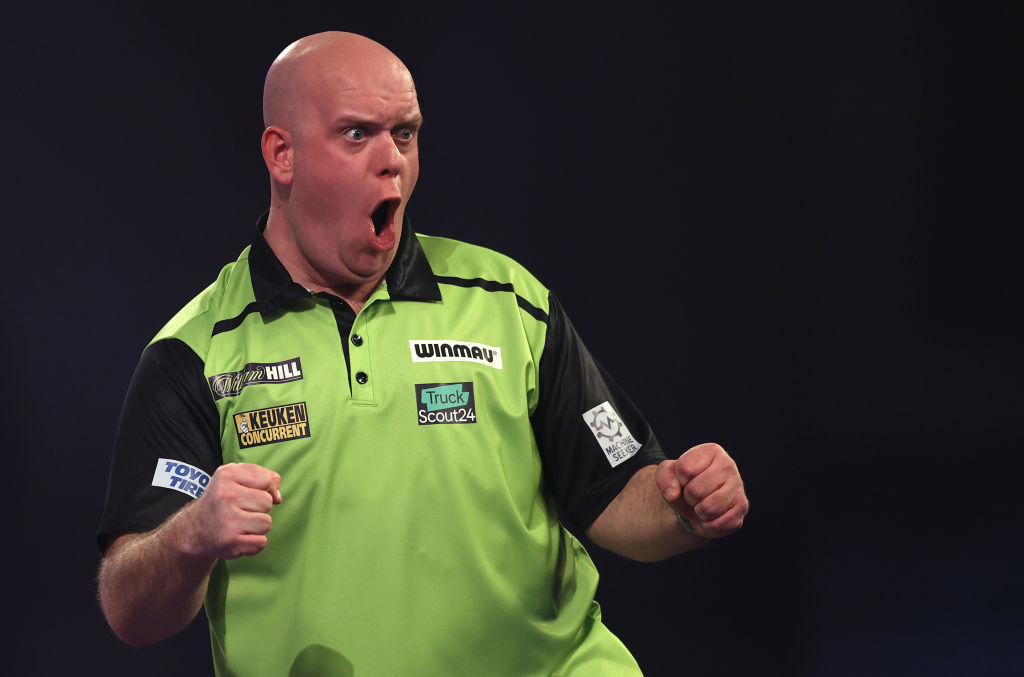 Michael van Gerwen feels some of his rivals on the oche are ‘boring’ and ‘having nothing inside them’ as the former world champion rediscovers his best form and sharpest tongue in the Premier League.

MVG enjoyed a superb three nights in the Premier League this week, winning his trio of matches, beating Dimitri van den Bergh, Jonny Clayton and James Wade to move top of the table.

There were a couple of monstrous averages in there, peaking with 109.96 in the win over Van den Bergh as Mighty Mike starts to show his immense best again.

After beating Clayton on Thursday, a game in which Van Gerwen was even more animated than normal on stage, the Dutchman explained that he feels forced to put on a show because some of his opponents contribute little in that sphere and with no crowd the pressure is on him to perform.

‘I have to because there’s no crowd,’ said MVG. ‘I have to create games all by myself because most of my opponents I play they’re not really nice to watch. There’s nothing in them. They’re a bit boring.

‘They’re all good players but are they also good players when there’s 8,000 people in the venue. That’s a different story.’

MVG comfortably saw off Wade 8-3 on Friday and doubled down on those comments, believing that some players are stuck in the past.

‘There are some players that don’t give any energy, have nothing inside them and are quite, in my opinion, boring,’ he told Live Darts.

‘Some people can tell me I’m wrong and look back to the old days but games move on and darts is moving on. Different people are going to stand up.’

Van Gerwen was not short of barbs for his fellow players on Friday night, revelling in his return to form.

After a shaky start to the Premier League he looks great again, which he says is down to his fighting spirit, which other players lack.

‘Of course I’ve been coming from far,’ he said. ‘But when you have the fighting spirit like me in my body, I never give up, like some other players do. That’s really important.’

There is now a couple of weeks off in the Premier League with players returning on 24 May when Van Gerwen will take on Nathan Aspinall, who sits second in the table.

Four nights left before Finals Night, and it could not be much closer! ð

Who are you backing to make the play-offs? ð¬