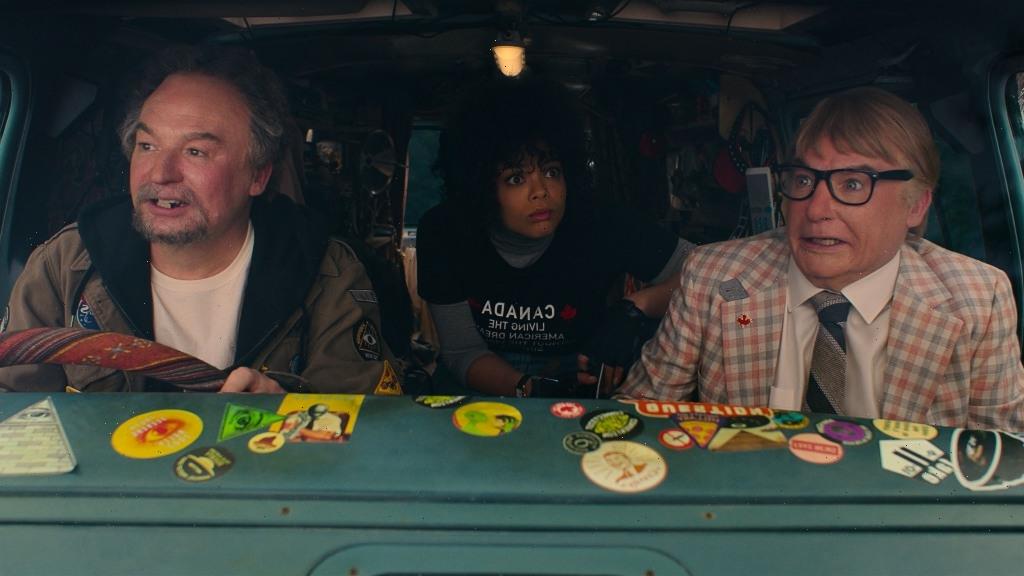 Watching “The Pentaverate” with the purpose of reviewing it gave me enormous sympathy for Wile E. Coyote trying to trap the Roadrunner while knowing, beyond a shadow of a doubt, that it would end in him getting flattened. The mission felt doomed from the start, and yet I just kept marching onward through Netflix’s newest comedy starring a comedian whose most relevant and lucrative days are long behind him. Making sense of “The Pentaverate” simply isn’t the point of “The Pentaverate,” which exists to let Mike Myers do whatever he wants almost 15 years after he last starred in a project of his own.

With “The Pentaverate,” which dropped its six episodes on May 5, Myers gets to play as many characters as he likes in a story about a centuries-old cabal resisting discovery. As narrator Jeremy Irons (yes) tells us in the opening credits, the difference between other secretive cults and the Pentaverate — a group of men apparently guiding world events since the Black Plague — is that these guys are “nice!” (That doesn’t feel especially true while seeing them in action, but hey, if Jeremy Irons says it, it must be true.) In every episode, Myers takes on the roles of a Canadian journalist going undercover, the Pentaverate’s head guard, two conservative conspiracy theorists who apparently are spot on about this one, and the four longtime members trying to find a fifth who isn’t just another Myers. Toward the end of the series, Myers tries to make some point about the internet, truth and the death of journalism, but it all just gets lost in the “technicolor yawn” of a vomit joke.

If any of Myers’ characters land, it’s probably the journalist, who may work for “Caca News” (truly), but whose wide-eyed confusion at crossing the border from lo-fi Canada to the high-def United States makes for one of the show’s precious few clever moments. (Myers also makes a brief appearance from Shrek himself, but that feels like cheating.) Of the many guest stars and cameos in the show, the ones who lock most quickly into the particularly bonkers rhythm of a Myers project are Keegan-Michael Key as a potential Pentaverate member, Debi Mazar as their seductive assistant and Jennifer Saunders as … well, it’s hard to say, but at least she commits. The very charming Lydia West (“It’s a Sin”) gets the closest to playing a real character, but still deserves better than the one she got.

At first glance, it’s kind of interesting that “The Pentaverate” is a limited series. Upon watching it, however, it’s clear that this television show is actually just an overlong movie chopped into six pieces. It’s tempting to say that this series, with its lack of editorial eye and surprisingly expensive production value, is emblematic of what Netflix has become now. But the truth is that “The Pentaverate” is exactly in line with what the streaming giant has been doing for years, as it collects aging comedians like Pokémon, writes giant checks to anyone who might bring in more viewers, and lets them make shows and movies with bafflingly long runtimes. In other words: this show is a feature, not a bug.

As far as “The Pentaverate” has a point at all, it’s to act as a symbol of Netflix’s commitment to giving Myers as much time, money and creative freedom as he wants — a truth the show itself winks at in a couple segments featuring a fake Netflix executive cutting in to insist that the show reel back its explicitly crude material, before making it even cruder. That the resulting show isn’t good doesn’t especially matter, in the end. It’ll probably still find enough curious viewers to justify the partnership, and for Netflix, that’ll be more than enough.

“The Pentaverate” is currently available to stream on Netflix.