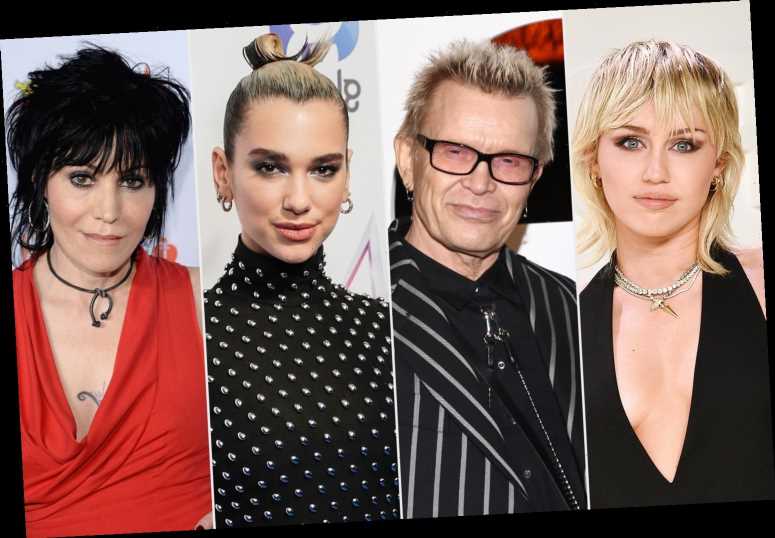 Get ready for some rock and roll!

On Friday, Miley Cyrus released the tracklist for her upcoming album Plastic Hearts, which drops Nov. 27 .

Rock legend Billy Idol will join Cyrus on "Night Crawling" while Joan Jett will perform with her on "Bad Karma." Plus, "Don't Start Now" star Dua Lipa is featured on track "Prisoner."

Fans are thrilled to hear the new music.

Responding to the pop star's Friday Twitter announcement, one person wrote, "Omg Miley I’ve been waiting 2 years for your new album!!! I love you so much!! My wish is to meet you one day."  "Wow it’s happening 😭 rock Miley," another added. "YAYYYYYYYYYYYYYYYYYYYYY," a third person tweeted.

This marks the "Midnight Sky" sonstress' first album since her 2019 split from Liam Hemsworth 13 months after they tied the knot.

"If you’re reading this … know that I f–ing love and appreciate you on the deepest level. I began this album over 2 years ago," she wrote. "Thought I had it all figured out. Not just the record with its songs and sounds but my whole f–ing life. No one checks an ego like life itself. Just when I thought the body of work was finished … it was ALL erased. Including most of the music's relevance. Because EVERYTHING had changed."

"Nature did what I now see as a favor and destroyed what I couldn’t let go of for myself. I lost my house in a fire but found myself in its ashes," she added. "Luckily my collaborators still had most of the music that was burned up in journals and computers filled with songs for the EP series I was working on at the time. But it never felt right to release my 'story' (each record being a continual autobiography) with a huge chapter missing."

"If it were a chapter in my book I guess I would call it 'The Beginning' which usually when something is over we call it 'The End.' But it was far from that," she ended the note. "In triumph and gratitude, I present to you my 7th studio record, Plastic Hearts."

Plastic Hearts is out Nov. 27.