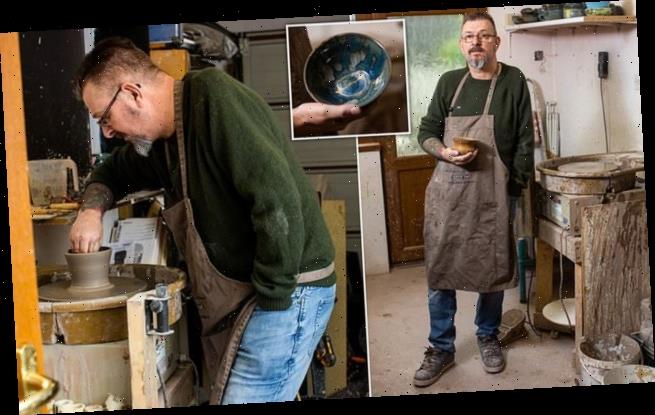 A military veteran who lost the use of his right arm in a motorbike accident and was later imprisoned for money laundering is now making a living from his newfound love of pottery.

Gary Fulton, 53, from Hayle, Cornwall, who served in Northern Ireland and Kenya, and was one of the last soldiers to guard Nazi Rudolf Hess at Spandau Prison in Berlin.

Following his military career, the former armed forces officer, who lives with his wife, Susan, 55, was knocked off his motorbike by a car in 2002 and rendered unconscious while he was going round a roundabout in Truro, Cornwall.

Then in 2017, he learned pottery while he was in prison for conspiring to launder VAT money, and continued with the hobby after he was released, selling pieces to galleries and at fairs.

The craftsman says that his disadvantage means that each piece he makes is unique. 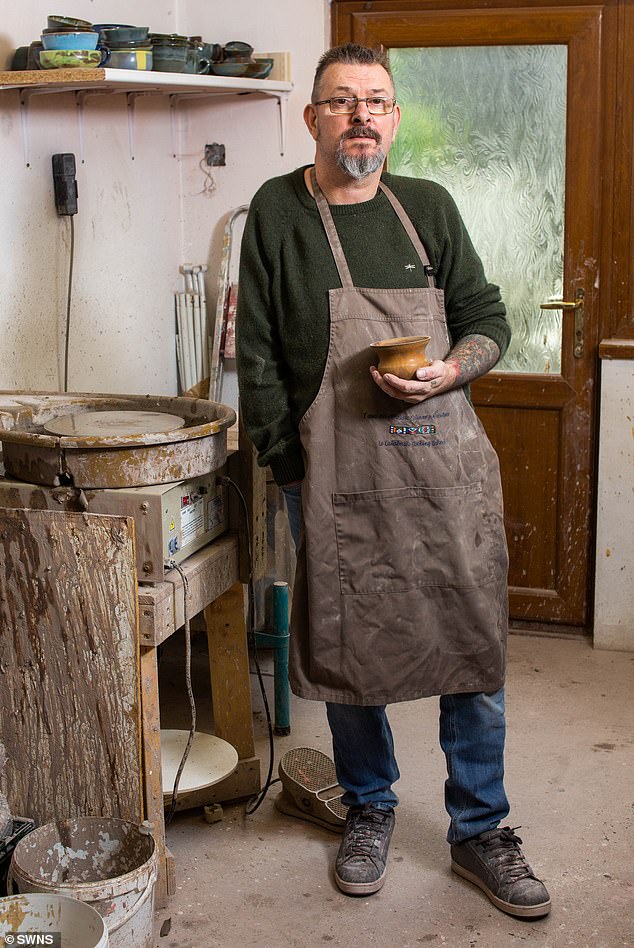 Gary Fulton (pictured), 53, from Hayle, Cornwall, lost the use of his right arm while he was riding his motorbike in Truro 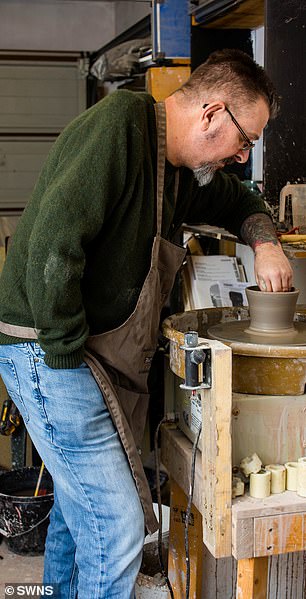 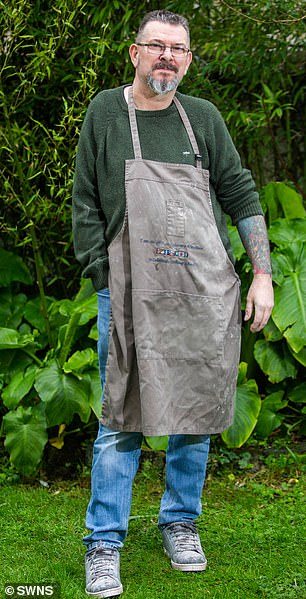 Gary (left and right), who served in Northern Ireland and Kenya, an, 55, was knocked by a car while going round a roundabout in Truro in 2017 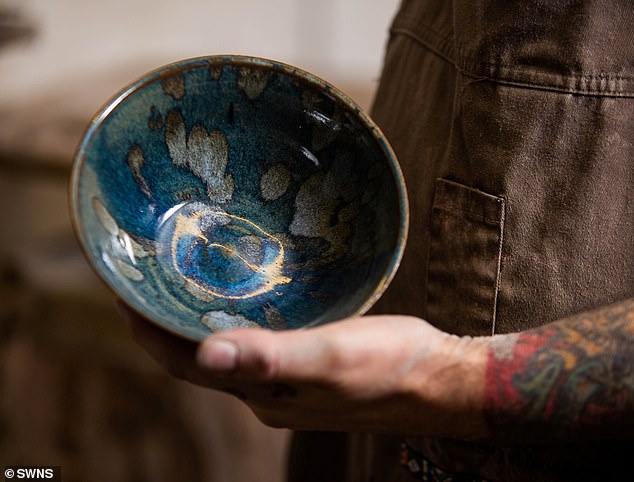 The military veteran found his newfound love of pottery while he was serving time in prison for money laundering. Pictured: Gary holds one of his pieces of work at his workshop

Gary, who was left with a brachial plexus injury, said: ‘I used to ride motorbikes foolishly and had an accident. I was knocked off at a roundabout which subsequently left me in a coma and on life support and when I woke up I had lost the use of my right arm.

‘I was completely paralysed. It was called a brachial plexus injury, consequences of which is a hell of a lot of pain and my right arm completely useless, but you get on with life and you crack on.

‘A year after that I had a heart attack that resulted in a coronary artery bypass – through my accident, not through ill health or anything – and it wiped me out. But I’ve always just got on with life.

‘My wife’s always cheered me up and encouraged me to keep going, and that’s what I’ve done.’

He added: ‘I can’t remember anything about the collision, I was sparked out.

‘I was in a coma for a while, I nearly died and was on life support, it was a bizarre time.’

When he came through, Gary was told that his arm was seriously damaged and that he would never regain full use of the limb. 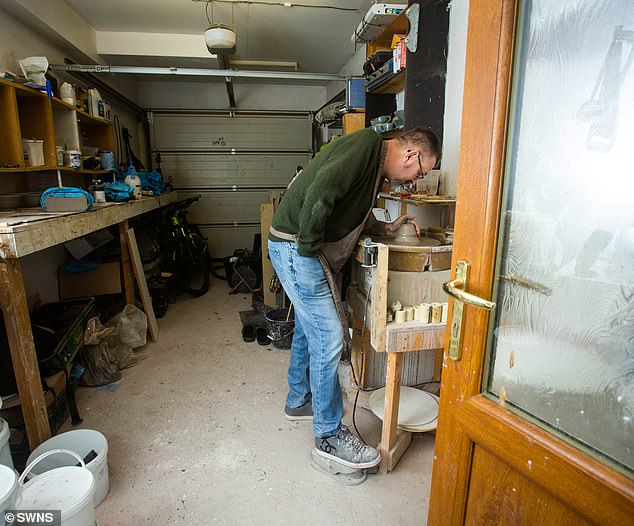 Despite being told that his arm was seriously damaged and that he would never regain full use of the limb, Gary (at his workshop) did not let the injury stop him from embracing life 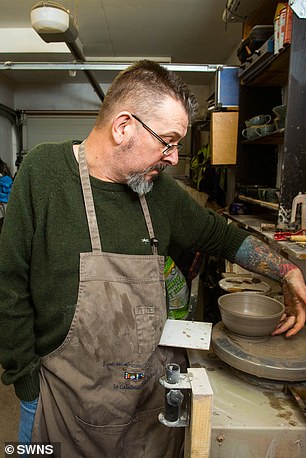 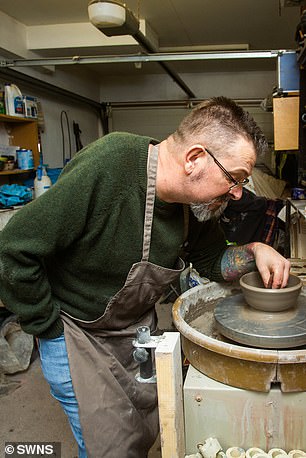 He continued: ‘Doing large things presents problems but you just try and work around it.

‘If I want to build up the walls I need something to support it and I don’t have a second hand to do that with. I’m hoping to have a way around that by using tongs.

‘As you go bigger the centrifugal force pulls the clay apart, it has a tendency to fly off and get a bit messy.’

Gary turned to pottery after he ended up in prison for money laundering and served two years and three months of his sentence.

While behind bars, Gary, a father-of-four and grandfather of six, signed up to distance learning and was invited to attend a session with rehabilitation group Landworks, based in Totnes, Devon.

Gary said: ‘I was in prison for money laundering, I served two years and three months.

‘It had a massive impact on my life, it wasn’t a great time. I was found guilty, what can you do?

‘It was horrible, you have to get the most out of a bad situation.

‘I started distance learning and I had the opportunity to go to Landworks in Devon. That’s where I learned pottery.’

After setting his sights on pottery, Gary said that his disadvantage made each piece he made unique – and he was  now hoping to start making a living from his new passion.

Gary said: ‘I try, it’s not the easiest thing to do but I enjoy it and people seem to like what I make. 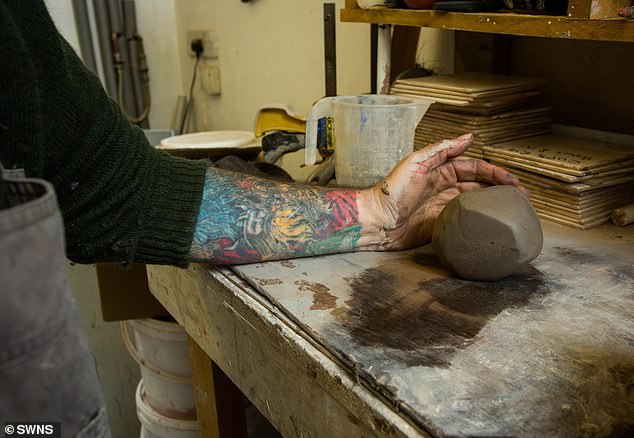 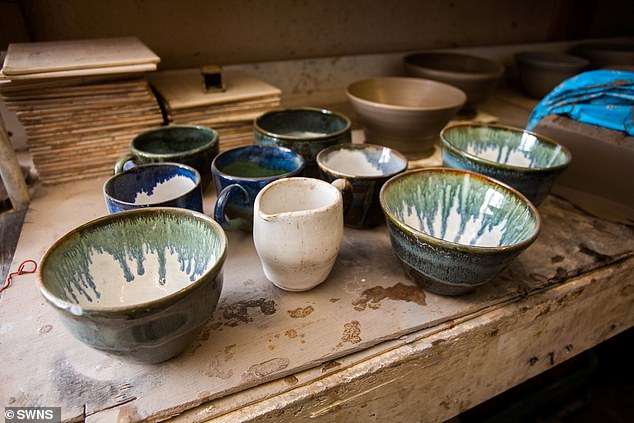 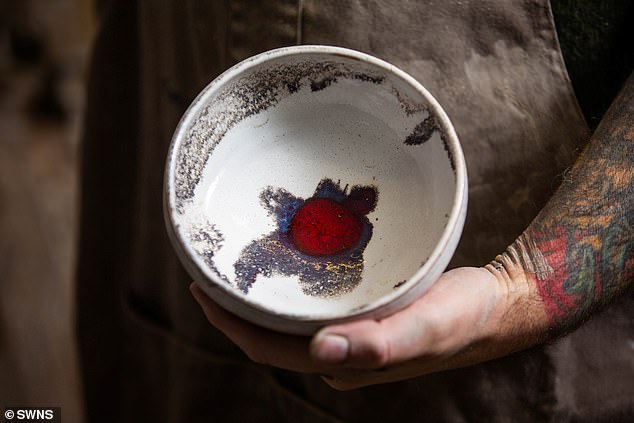 ‘Centre-ing large lumps of clay can be difficult one handed, I’m a bit restricted by the size of stuff I can make but I’m trying.

‘Every piece is different. They will be similar sizes but no two are the same.

‘Everything is hand made and it’s rustic, I’m not an expert by any means but people seem to like what I make. It’s a lovely feeling.

‘I’ve made a few hundred pieces in total I’d have thought, generally in a week I’ll make around 20 to 30 pieces.

Now, Gary lives a quiet life by the seaside and says he wants to focus on his pottery – which he sells at art and craft fairs, and in a few local galleries.

He added: ‘I do it mostly in the evenings and weekends. I try to sell them at craft fairs and markets, and they’re in a few galleries.

‘I’ve got a day job as well, in telesales – selling windows and conservatories.

‘My life has never been dull, I could never be accused of being boring. Stuff happens to lots of people, I just take each day as it comes.

‘I just want a quiet life to be honest, and I’m hoping I can make something of the pottery.’