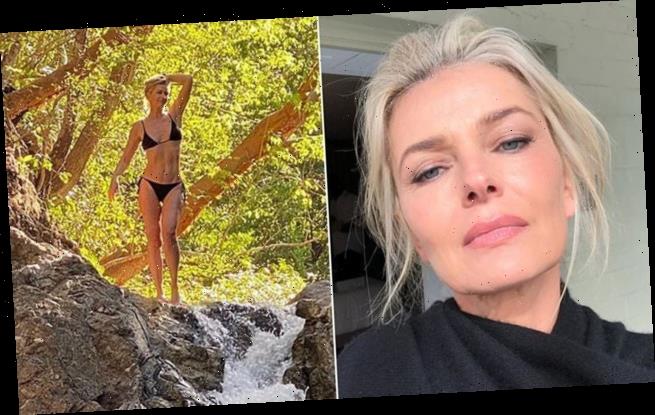 Model Paulina Porizkova, 54, shares a sexy bikini photo from Costa Rica and gushes that she’s so ‘grateful’ to be there after months of ’emotional hell’ following husband Ric Ocasek’s death

Instagram users are drooling over the latest post from supermodel Paulina Porizkova, who shared a stunning bikini picture from a Costa Rican vacation on Monday.

The 54-year-old Czech stunner posed for the snap at the top of a waterfall, wearing just a tiny black bikini.

Looking incredibly fit and toned, Paulina showed off her incredible figure while admitting the trip was a much-needed break after months of mourning for her estranged husband, Cars frontman Ric Ocasek, who died in September. 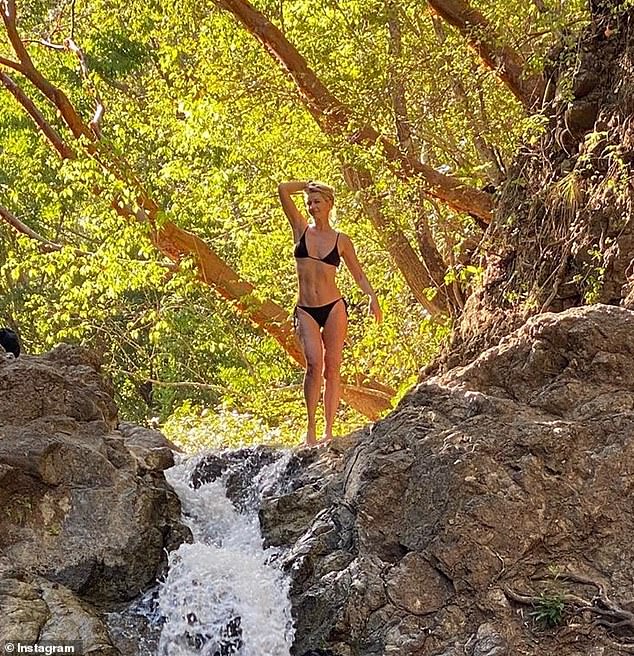 Superstar: Model Paulina Porizkova has shared a stunning bikini snap from Costa Rica, where she is seen posing atop a waterfall 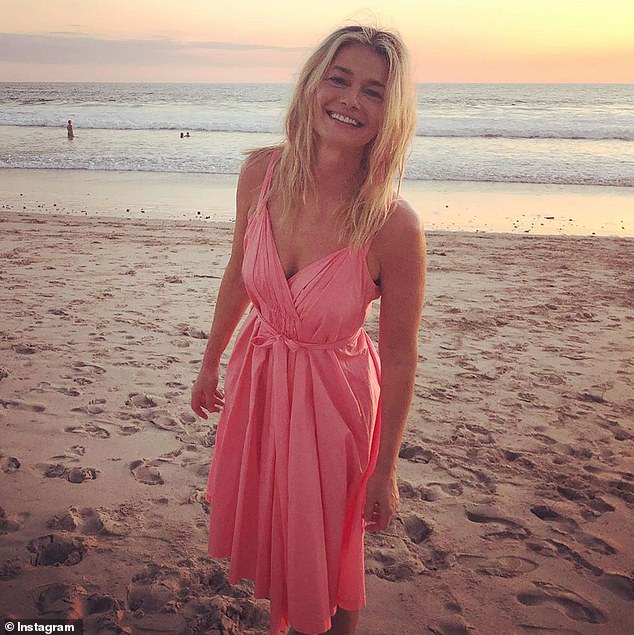 Self care: The 54-year-old, whose estranged husband Ric Osacek died in September, said she is ‘so grateful’ to be in Costa Rica after months of ’emotional hell’ following his passing

In the photo, Paulina posed like the pro that she is, holding one arm above her head and shifting her weight to one side as she flaunted her incredible figure. 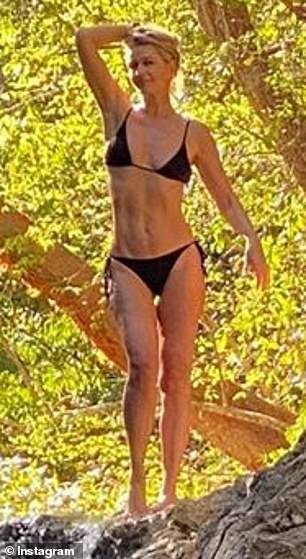 Impressive: Paulina’s Instagram followers were full of praise, complimenting the model on her ‘amazing body’

‘And at the end of the dusty road is this — a beautiful waterfall,’ she wrote. ‘And you cool down and wash the dust off. And then get back on the ATV for some more adventures and dirt.’

Commenters went wild over the snap, praising the 54-year-old for looking so fantastic.

‘Fit and Fabulous! Way to represent us girls in our 50’s!’ wrote one.

‘Paulina you are absolutely gorgeous!!! Your body is perfect,’ said another, while a third commented: ‘You look like you did in the 80’s Paulina.’

‘Gosh … amazing body! How old are you again?’ wrote one more.

Others called her an inspiration, and another pleaded: ‘Can I have your figure for just 5 minutes to Rock a bikini?!’

Paulina has been posting several photos from her trip, including one of her lounging in a pool at a rental home called Villa Neruda.

The $600 per night accommodations have three bedrooms and four baths, and are a short drive from Playa Manzanillo and Playa Hermosa.

Paulina said that she much in need of a vacation, and it appears to be the first one she has taken since traveling to New Orleans in August.

At the time, the Sports Illustrated Swimsuit model also posed a couple of photos of herself enjoying the pool in bikinis.

Now, though, her trip is fulfilling a different need, not just for relaxation, but for healing.

In September, her estranged husband, Cars frontman Ric Ocasek, died at the age of 75.

‘Imagine, after going through an emotional hell — to land here,’ she wrote.

‘Being surrounded by saltwater the temperature of your mother womb, the sounds of monkeys chattering in trees, the scent of damp green leaves and night blooming jasmine, sipping a Negroni while the sun sets over the ocean on the horizon. Grateful doesn’t even begin to describe it.

‘I hope you can handle a few weeks of totally shameless vacationing from me,’ she added. 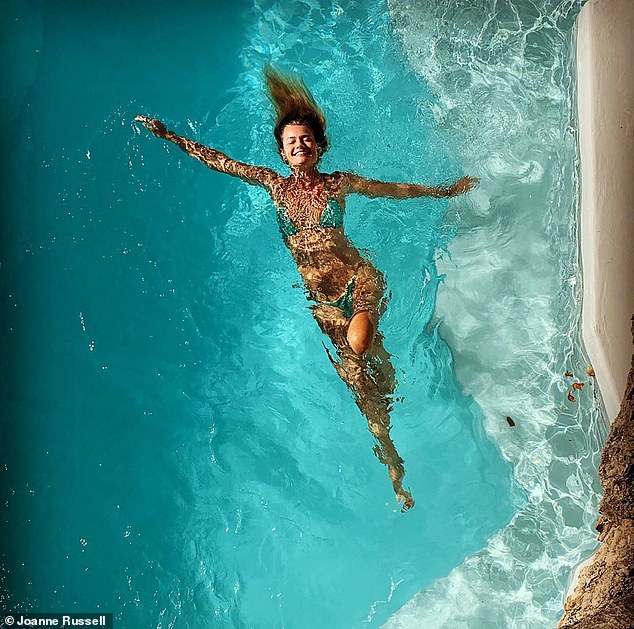 Beauty: Paulina (pictured in August) hasn’t been on vacation in a while 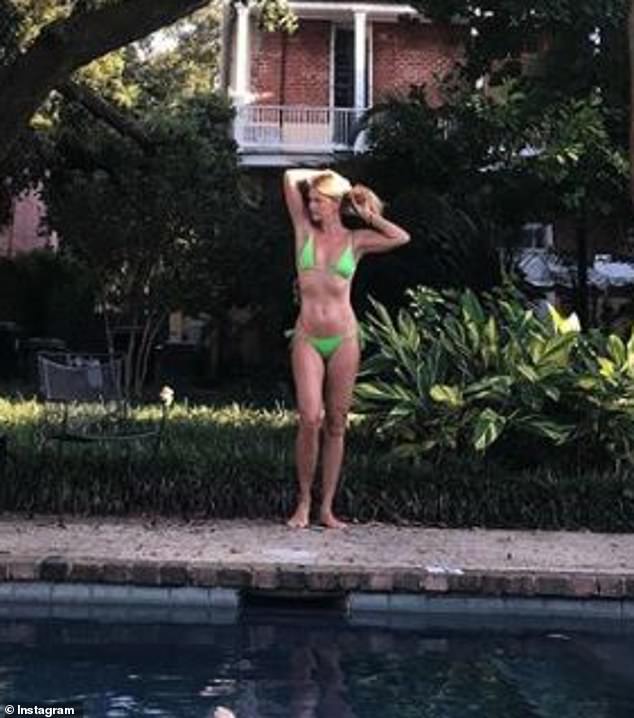 Soaking up some sun: She visited New Orleans last summer and shared bikini pictures there

Paulina has previously opened up about suffering from depression after Ric’s death. At a recent annual check-up, she shared an Instagram photo and revealed that she decided not to use medication to get through the hard time.

‘Ok, time to restart the systems. First, my annual physical with our longtime family doctor. And agreeing that my current depression needs to be processed rather than medicated. At least for now,’ she wrote, ending her post with the hashtag ‘#startingtheyearright.’

Paulina has been documenting her anguish on Instagram for several months, most recently sharing a glimpse into her family’s ongoing grieving process after Ric’s death.

She snapped a photo of one of her two sons crouching down by his father’s grave and posted it online, revealing that their children — Jonathan, 26, and Oliver, 21 — are working together to design a headstone for their dad.

‘A simple little mushroom taken off our porch, for now, marks the resting place of their dad…’ she captioned the photo. ‘The real thing is being designed jointly by both of them: a fitting tribute to the father they adored.’ 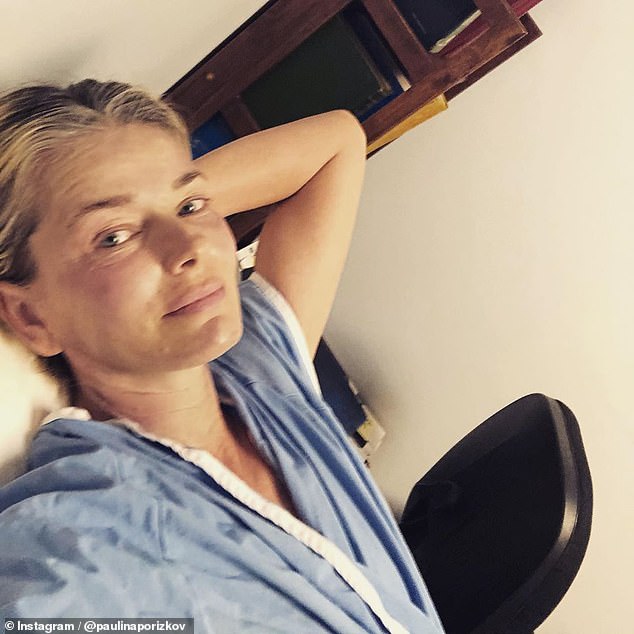 Candid: In January, she shared a photo of herself lying on an examining table in a blue hospital gown on the day of her annual physical

Sharing her story: The supermodel said that she and her doctor agreed that, for the time being, her ‘current depression needs to be processed rather than medicated’ 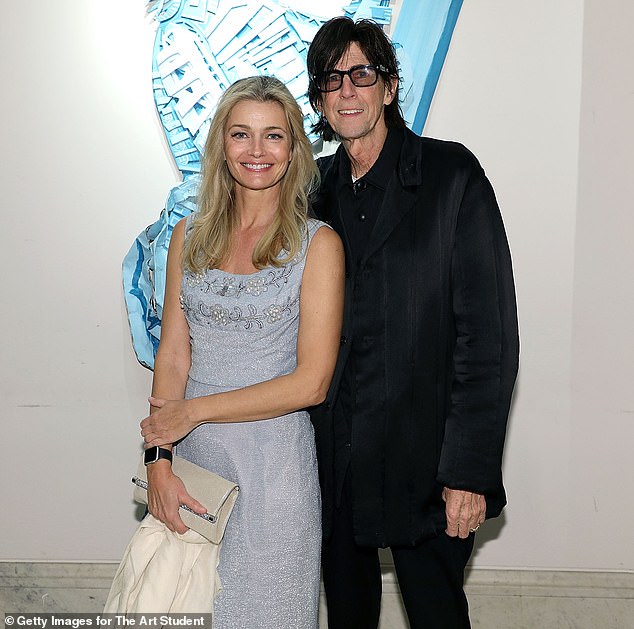 In mourning: Paulina has been candidly documenting her anguish on Instagram following the death of her estranged husband, Cars frontman Ric Ocasek, on September 15

Paulina’s poignant post came just days after she opened up to her followers about how hard she was finding it to post day-to-day content from her life without it feeling ‘narcissistic.’

‘Hey everyone, I’d like to rejoin you, but at the same time, I have the hardest time posting,’ she shared. ‘Photos of myself, or what I like, seem so narcissistic at the moment… There is so much destruction and pain in the world right now…’

What’s more, Paulina is dealing with getting older, and has candidly spoken about the feeling associated with that.

Posting a selfie without makeup or filters, she revealed her internal struggle to see herself in that light.

‘I’ll be turning 55 soon. At first glance, I think — ew. I look so old,’ she admitted. ‘Grief is certainly no beauty maker. My eyelids are starting to droop. The jowly bits next to my mouth don’t only make me look older but also somehow bitter. The gray in my hair is an easy fix, although, honestly, I’d love to just grow it out and stop coloring.

‘Now, how can I help to make all this — what we consider flaws — to be seen differently, to be seen as confidence and beauty of a mature age rather than something that needs to be eliminated?’ she asked.

‘I used to think gray hair was aging, that it was a sign of giving in to being old, but thanks to many glorious and rocking hot women on Instagram, I’ve totally changed my vision to gray hair being sexy and confident.’ 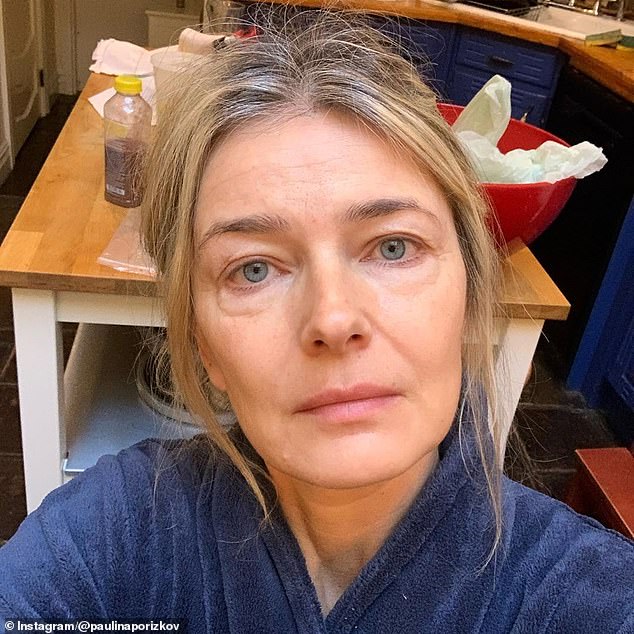 Sharing: In January, Paulina posted this makeup-free selfie while opening up about the physical toll her grief has taken on her body 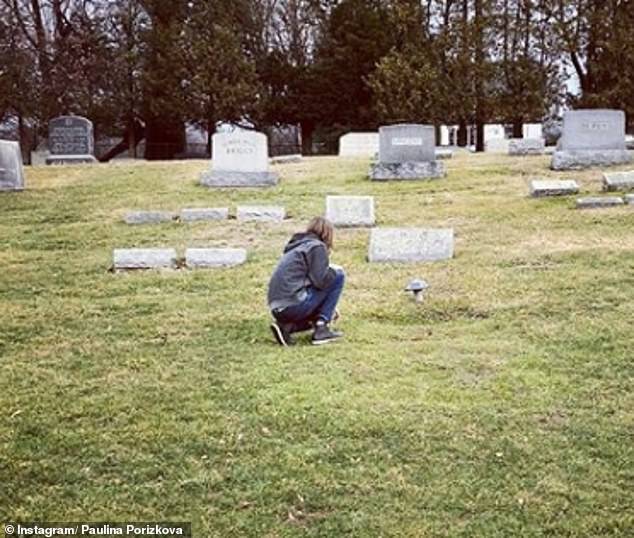 Tribute: Previously, she posted a photo of her youngest son, Oliver, crouching down at her late husband’s grave 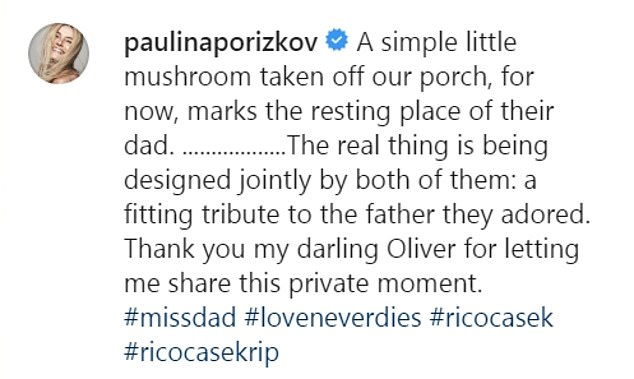 Primate moment: Oliver, 21, and his brother, Jonathan, 26, are designing a headstone for their dad together

Paulina recalled Pink sharing a private conversation she had with her then-six-year-old daughter, Willow, about beauty when she accepted the Video Vanguard Award at the MTV Video Music Awards in 2017.

The singer explained that she made her daughter a PowerPoint presentation featuring ‘androgynous rockstars and artists that live their truth’ after the little girl told her she was the ‘ugliest girl’ she knew because she looked ‘like a boy.’

Pink said she told her daughter, ‘We take the gravel and the shell and we make a pearl. And we help other people to change so they can see more kinds of beauty.’

In her post, Paulina applauded Pink for teaching her child that they should ‘help other people discover their beauty’ rather than trying to fix themselves.

The former American’s Next Top Model host said she’d like to end her post with a rousing, ‘Let’s blow up the f*****g box, ladies,’ but admitted she’s not entirely free from focusing on her looks. 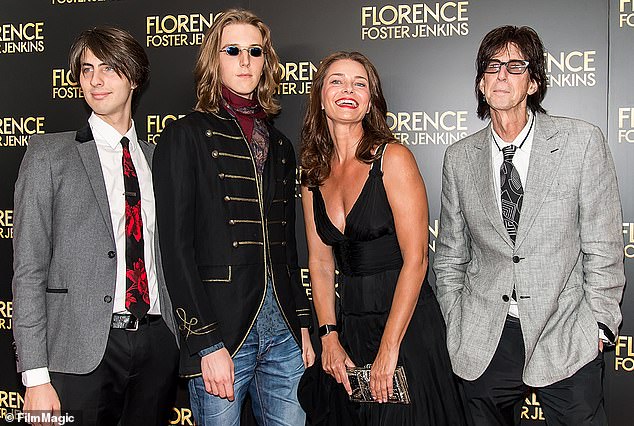 Heartfelt: The model, who found her late husband’s body in their Manhattan townhouse in September, said her sons Jonathan and Oliver ‘adored’ their father 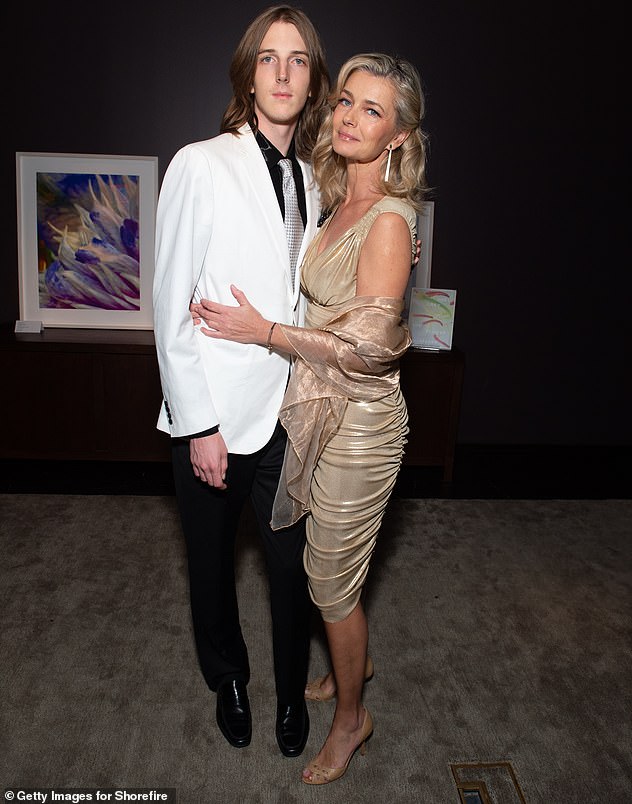 Painful: It was reported in November that Ric had cut Paulina out of his will, claiming she had ‘abandoned’ him. She is pictured with their son Oliver that month

‘The truth is that I am a mid-fifties woman,’ she wrote. ‘I’m vain and insecure, and next week I could decide to have surgical help to fit the comfortable and warm and familiar box instead of crusading to blow it up. #selfie #truth #beauty #sexyhasnoagelimit.’

Paulina and Ric were separated and going through a divorce when he died at the age of 75 on September 15. It was later revealed that he had cut her out of his will, claiming he was ‘abandoned’ by her.

But since they were not legally divorced, Paulina, as his widow, may be entitled under New York law to an ‘elective share’ of his estate.

Ric specifically addressed the rule in his will, stating: ‘Even if I should die before our divorce is final… Paulina is not entitled to any elective share… because she has abandoned me.’ 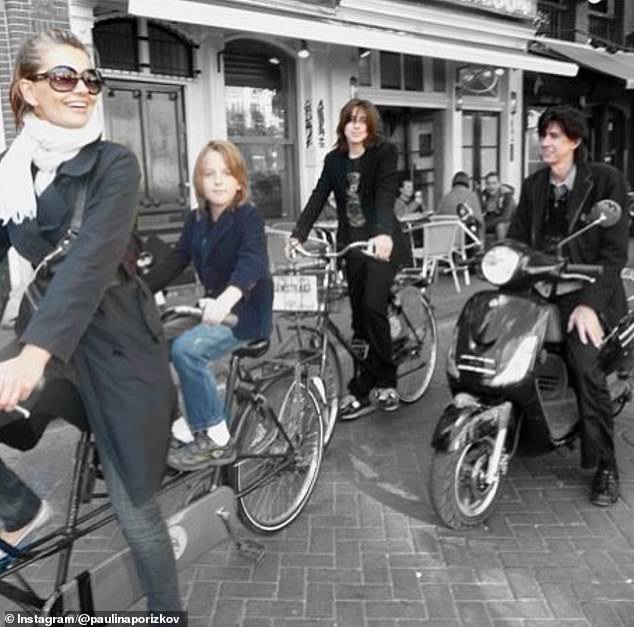 Speaking out: ‘I’ve known about the will since the day after Ric passed. All you have heard from me since is in spite of that. #loveneverdies,’ she captioned this image after the news broke 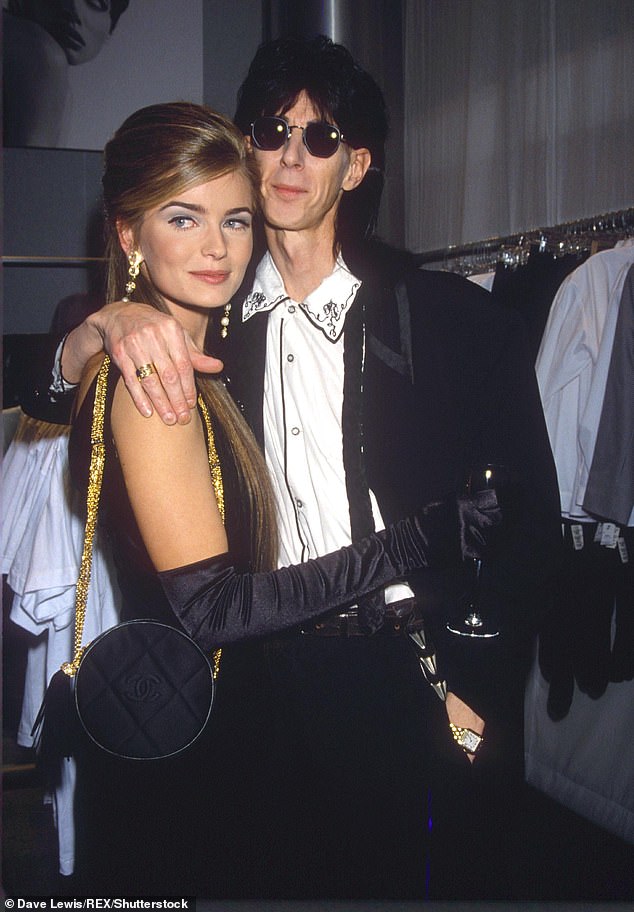 Looking back. Paulina met Ric when The Cars were filming the music video for Drive in 1984, and she became his third wife in 1989. They are pictured together in New York in 1990

However, unless it can be proven in court that she did abandon him, she will likely be entitled to a one-third share of the musician’s assets, which are listed as $5 million in ‘copyrights’, $100,000 in ‘tangible personal property,’ and $15,000 in cash.

Paulina met Ric on set while The Cars were filming the music video for Drive in 1984, and she became his third wife in 1989. She announced in May 2018 that they had split the year before after 28 years of marriage.

Though they were divorcing, they continued to share a New York townhouse and that is where Paulina found the famed rock star dead on the morning of Sunday, September 15.

A medical examiner determined he died from hypertensive and atherosclerotic cardiovascular disease with pulmonary emphysema being a contributing factor.