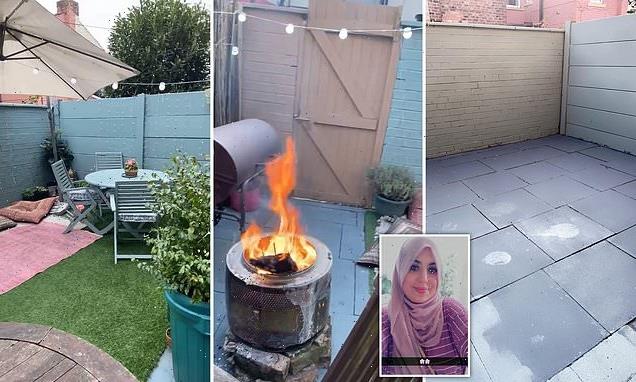 A thrifty mother has revealed how she was able to give her cluttered garden a new lease of life at a time when having a decent outdoor space to relax is coveted by most people.

Sarah Takhtash, 39, from Manchester, explained that she spent two months transforming her backyard into a warm and welcoming space.

The mother-of-four admitted she used to avoid going into her garden because she was unable to afford a professional designer and hated the space.

But after spending two months scouring Facebook Marketplace for second hand items for sale or free collection, with her most expensive purchase being floor cushions for £25.

When her washing machine broke down, she repurposed the drum to use as a fire pit. 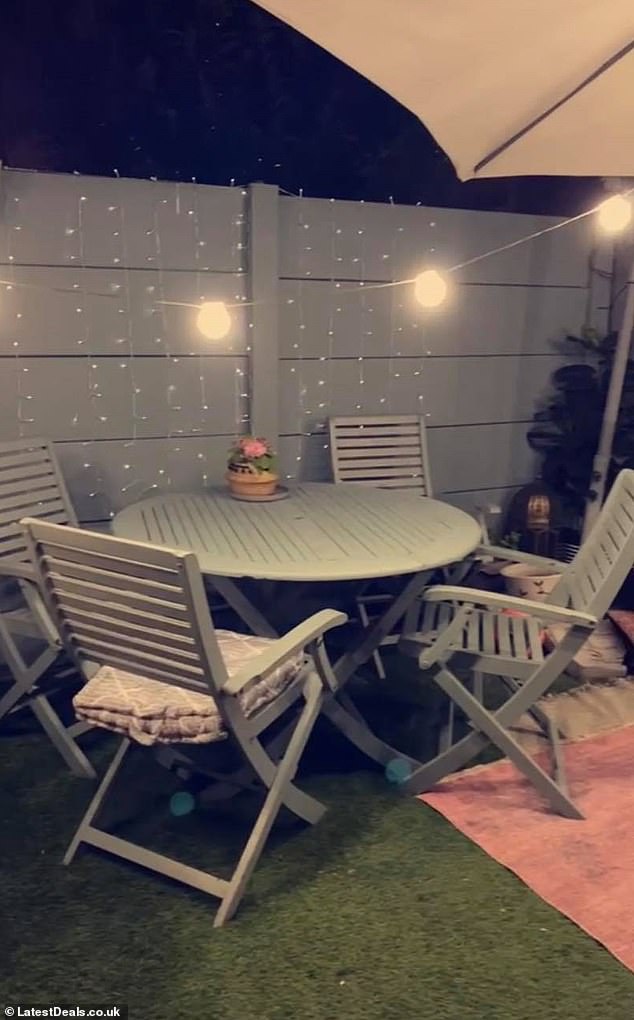 Sarah Takhtash, 39, from Manchester, has impressed DIY fans with the results of her garden transformation for just £45. Pictured: Sarah’s garden now 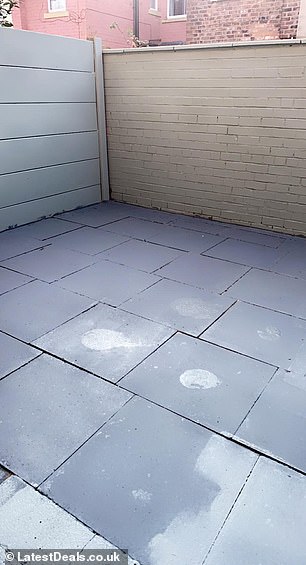 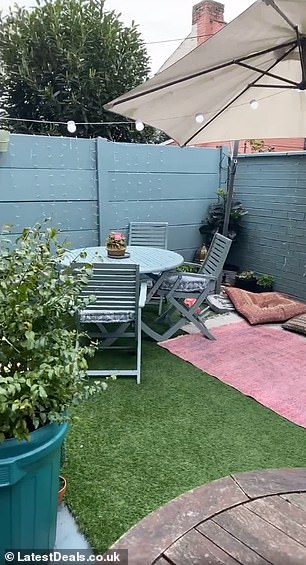 Sarah who is a mother to four, admitted she would avoid going in her garden because she hated the space. Pictured left: before, right: now

Sarah proudly shared the results of her DIY transformation on a Facebook group that had inspired her to do the project.

‘Over the years I have never done anything to my backyard, and I absolutely hated it. I wouldn’t even hang the washing out in it,’ Sarah said.

‘I follow lots of DIY groups on Facebook and was always in awe of their garden makeovers.

‘I know I couldn’t afford to do it professionally, so I decided to do it myself – especially because I’m a big believer in reusing and upcycling furniture.

She used Facebook to find materials, saying: ‘I spent about two months collecting everything.

‘The hardest part was driving out to collect items. Some people were a bit further out than where I lived.’ 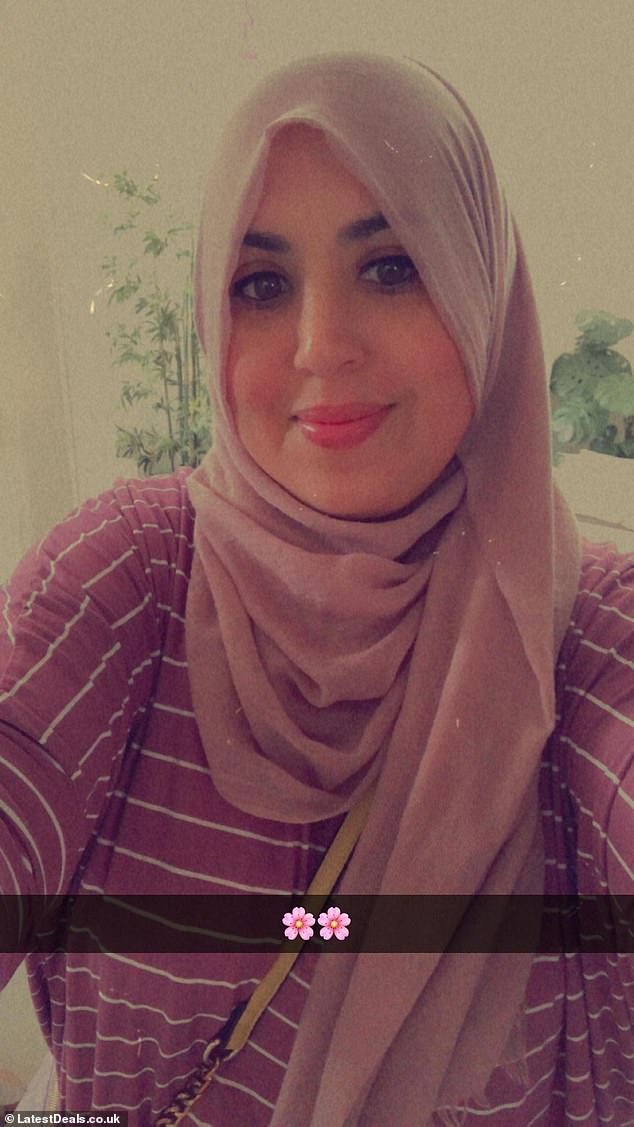 Sarah (pictured) who was unable to afford a professional garden designer, revealed she was inspired by DIY projects shared on social media

Sarah cleared everything out of the back yard before making use of her first budget find – two tubs of outdoor floor paint for the walls and fence.

The next find was particularly lucky, because she got hold of a colour co-ordinated green table and chairs.

Sarah continued: ‘They happened to be painted in mint green and matched my walls and floor.

‘I managed to get a large piece of astroturf which covered most of my flooring.

‘I then picked up some rugs, floor cushions and a storage box. At this point I placed the plants out with a few lanterns which I already had. 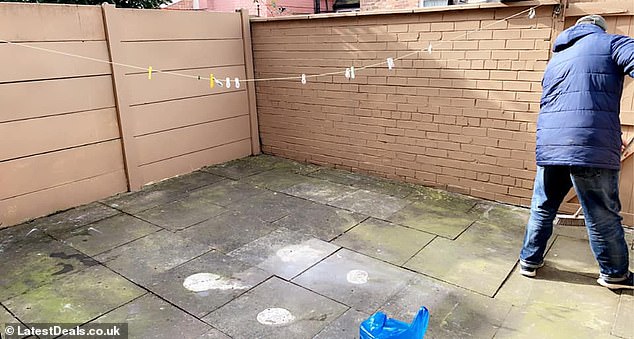 Sarah moved everything out of her backyard and spent two months scouring Facebook for items to upcycle the space. Pictured: The garden before 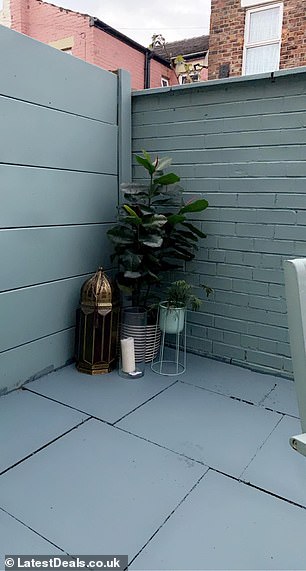 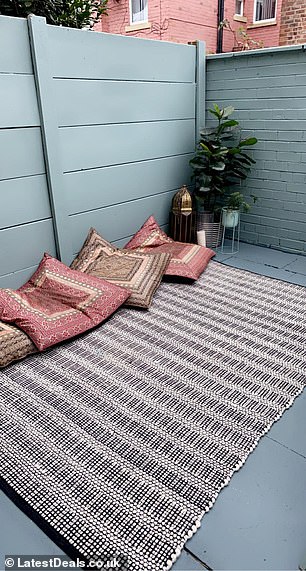 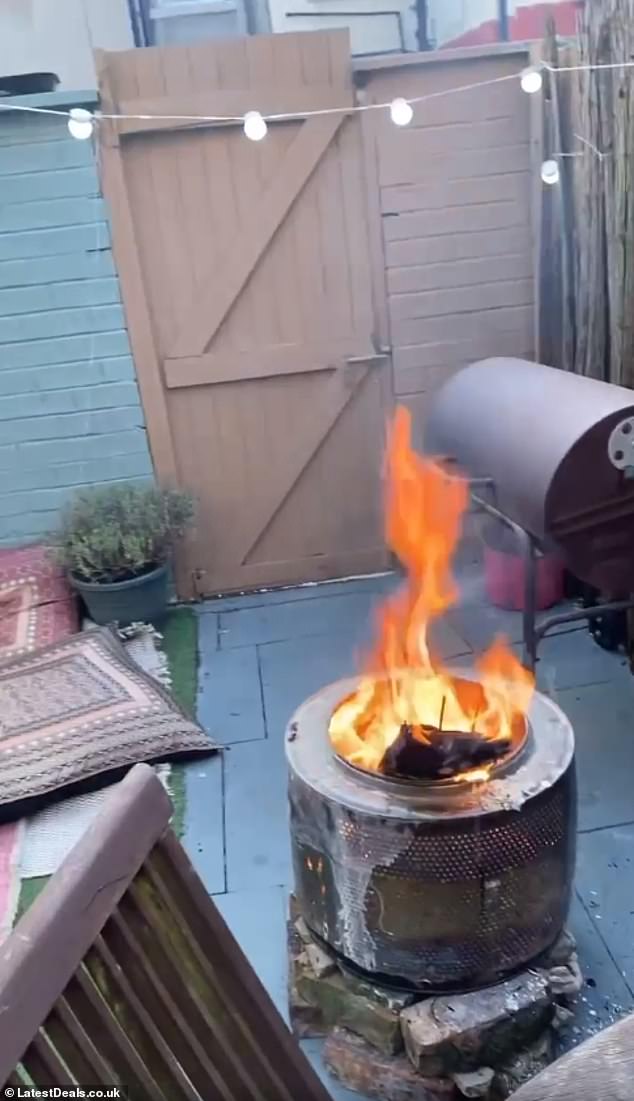 ‘Someone kindly gifted me a large parasol, which I attached the light chain to.

‘The last thing I collected was another table and chairs set – one was not enough because we are a family of six.

‘The most I paid was £25 for the floor cushions and the solar powered lights only cost £10 from B&M.’

Sarah told how she experimented, saying: ‘My washing machine broke in February and I remembered how people had posted on Facebook about using the drum as a fire pit.

‘It was hard work taking it to pieces,’ she admitted, but the labour has now paid off.

After searching through Facebook listings and finding a barbeque, plus some wood and bricks to place under the fire pit, her work was complete. 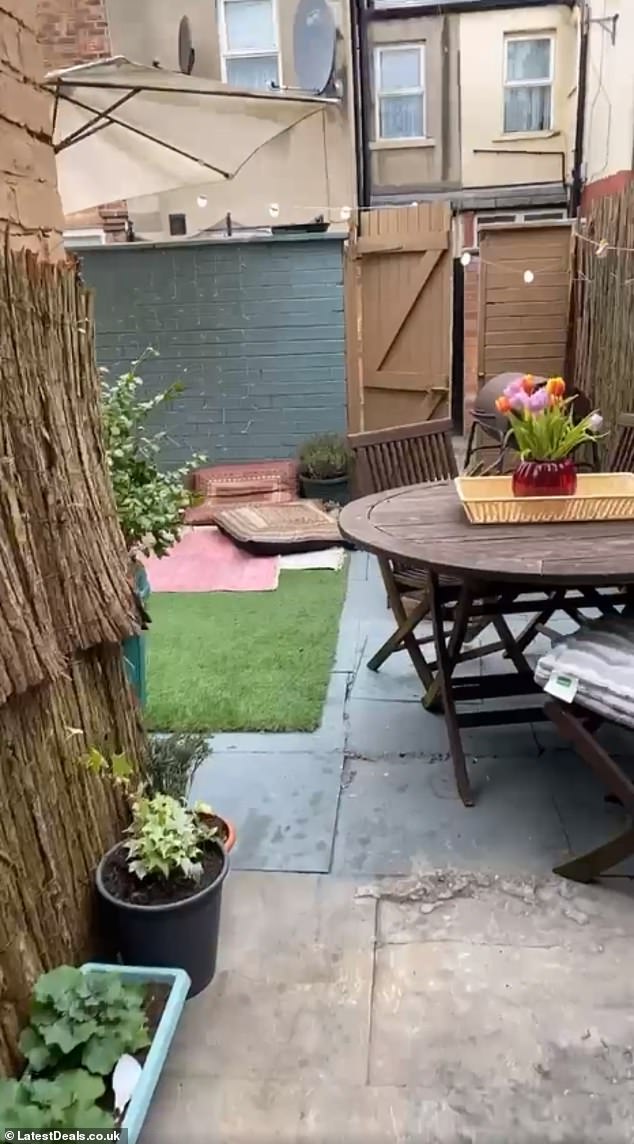 Sarah admits she didn’t expect the end result to be ‘so lovely’ and gushed that she now loves sitting outside. Pictured: Sarah’s garden now

Sarah said: ‘Honestly, I didn’t think it would all turn out so lovely. I love it and enjoy sitting out. It’s like I have gained an extra room.’

Facebook users were equally impressed, with one saying: ‘A lovely haven. well done’

Another said: ‘You have done well looking beautiful’

Tom Church who is the co-founder of LatestDeals.co.uk commented on Sarah’s project saying: ‘I love what Sarah’s done with her garden. It’s great that she managed to get most of her supplies from Facebook – there are so many hidden treasures that can easily be repurposed.

‘Using a washing machine drum is a great way to upcycle old white goods. Just be sure to remove all of the plastic when you’re taking the machine apart, as it can be toxic when it burns.

‘When I took my own machine apart, I had some plastic inserts which needed removing – so I tapped on the outside with a hammer and they simply fell off.

‘If your drum comes with a spindle, why not use it to keep your new fire pit sturdy? Push it into the ground if your garden has a grassy area and you’ll reduce the risk of it tipping over.’