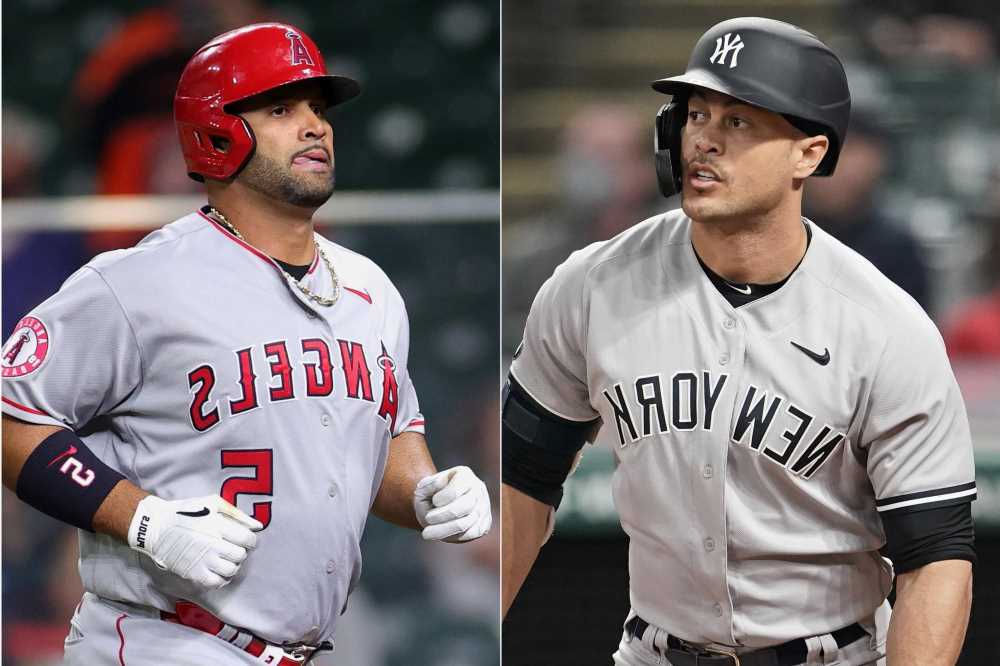 Is your team’s high-salaried, unproductive player driving you crazy, not only by hindering your club’s performance but also by handcuffing its club’s financial flexibility? Now — in your imagination, at least — you can subtract that player from existence and add a player (or players) at roughly the same price (give yourself $1 million leeway). We’ll use luxury-tax salary figures (courtesy of Spotrac), because that sure seems to drive organizations’ decision-making more than any other accounting, and limit the available pool of “Adds” to veterans who have been available via trade or free agency.

If the designated hitter’s two-homer display Friday night showcased what he can do when he’s right, his first 15 games underlined how he looks when he’s wrong. Does his upside outweigh his durability concerns, his lack of versatility and his streakiness? Not when he’s signed with the Yankees through 2027.

The Yankees possess plenty of righty power even without Stanton. How much would they benefit from Gregroius’ lefty bat and his clubhouse personality? As for his defense at shortstop, he entered Saturday’s action worse (five outs below average) than his Yankees successor Gleyber Torres (two OBA), yet he has never fared well in this metric and certainly passes the eye test (he makes the easy plays, in other words) better than Torres — who would still be on the team for Aaron Boone to mix and match as he saw fit.

As for Ray, he’d serve as another back-end arm for a starting rotation that probably will require plenty of options to navigate this unique season.

In the spirit of Cano, this is a cheat, as the second baseman will not draw a salary in 2021 by virtue of his failing a test for illegal performance-enhancing drugs. Unless he’s kind, and stupid enough to be ensnared a third time, however, he’ll return to the Mets’ books for 2022 and 2023.

How nice would it be to have Arenado, whom the Cardinals acquired on the cheap from the Rockies, manning the hot corner at Citi Field? Rodon, meanwhile, shoving for the White Sox after they non-tendered him and brought him back at a lower number, exemplifies the sort of buy-low success to which all teams aspire.

For Francisco Lindor, his $341 million honeymoon off to a slow start, the goal will be to avoid making next year’s second annual Subtract and Add feature.

The Red Sox, baseball’s most exciting and dizzying roller-coaster ride of the 21st Century, find themselves relevant again thanks to a strong start behind returning manager Alex Cora. Maybe Sale, currently rehabilitating from Tommy John surgery, can return later this season and serve as a terrific “trade,” bolstering the Red Sox’s pitching corps and resuming his ace-like profile through the 2024 season. Nevertheless, this commitment sticks out as a questionable one because the Sawx signed Sale to it in March 2019, a year before he would’ve reached free agency, following a 2018 campaign during which he set off red flags about his durability even as the team won a championship.

Springer, who hopes to debut shortly with the Blue Jays after being delayed by oblique and right quad injuries, would bolster a Red Sox outfield that, aside from Alex Verdugo, hasn’t hit much.

The 41-year-old Pujols, a first-ballot Hall of Famer before he ever donned the Halo’d “A,” concludes what will go down as one of the worst contracts (10 years and $240 million) in the game’s history; he stopped providing bona fide value after 2016, Year 5.

And as the 2021 Angels can boast of sufficient offensive firepower so far, their pitching largely stinks again, a major concern in the effort to procure Mike Trout a playoff game victory sometime this millennium. If Wheeler is off to only a so-so start, recall that he historically pitches better in the second half.

The Athletics shrugged off a 1-7 beginning, surging into the AL West penthouse, as is their won’t. That opening stretch also included the dire news that the closer Rosenthal, Oakland’s biggest buy of the winter, needed surgery to repair thoracic outlet syndrome in his throwing arm. We know what a death knell that can be for pitchers’ careers.

The A’s bullpen has managed just fine without Rosenthal. Their starting rotation requires help. Matching the Padres’ successful offer to land Snell from the Rays would’ve been challenging. The A’s could afford Snell’s team-friendly contract, though.

What do you get for the team that has everything? Price, who opted out of the 2020 season, stands as such a luxury on this roster that he is being deployed as a reliever, sometimes in high-leverage calls, sometimes lower. The Dodgers surely regret nothing about this transaction, for it also brought them Mookie Betts from the Bosox.

So with no crying need, why not see if the stud quarterback Rodgers, who recently shined as a “Jeopardy!” guest host and is at odds with the Packers over his status, wants to branch out some more? His jersey would sell well and, after so many years in Wisconsin, you’d think he could take the mound and throw some high cheese (sorry).