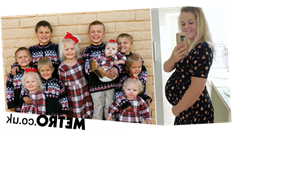 Since Courtney Rogers, 36, married church pastor Chris Rogers, 32, back in October 2008 and welcomed her first child in 2010, the longest she has gone without being pregnant is just nine months.

In the space of ten years the stay-at-home mum has welcomed 10 children – and doesn’t plan to stop popping out kids until she has 12.

Handy, then, that she’s already on her way to number 11, as Courtney is pregnant again and expecting her fifth daughter on 19 November.

The family, who live on a 12-acre farm in Sante Fe County, New Mexico, is currently made up of six boys, four girls, Courtney, and Chris. Everyone in the family has a name beginning with C.

Courtney, who shares the family’s life on Instagram, said: ‘We’re delighted to be expecting again.

‘I always get nervous because we’ve had two first trimester miscarriages, but we’re at 33 weeks now and very excited. We can’t wait to hold this little one.’

Chris and Courtney are so busy raising – and homeschooling – the kids that they only have time for one date night a year.

It’s expensive, too. The parents spend $1,200 a month on food for the family, while Christmas sees them spending $1,000 just on the children’s gifts as the parents go without presents.

The family have to work out ways to pinch the pennies, having stopped all eating out and unnecessary purchases, which were costing them well over $1,000 a month, back in January.

Saving money by handing down the older children’s clothes, their big treat is an annual week-long camping holiday near their relatives in Georgia, 1,500 miles away – costing $1,000 (£780) for travel and expenses.

But for Courtney, having a big family makes all the busyness and expense worth it.

‘My husband is the eldest of 10, so before we got married, he joked about having as many children as his mum had.

‘The kids want us to be like the film Cheaper by the Dozen, where the parents compromise their careers to raise 12 children.

‘Having several kids in diapers at once and lots of strollers is normal life to us.’

Courtney and Chris first met at a church camp in Georgia in 2007, and tied the knot one year later.

‘I love being pregnant,’ said Courtney, who has never had morning sickness and chooses not to use birth control, which she says is not on religious grounds.

‘I love growing another person inside me, thinking about what they will be like and picking out names.

‘I am the only mum at our church who has lots of kids. I think the most anyone else has is four.

‘But I have never been comfortable going on birth control, as I don’t like the idea of taking a pill and I love having a big family.’

Every day Courtney wakes up with Coralee at 7.30am, gets the other children up and ready, and prepares the family’s breakfast of cereal and fruit for 8am.

The older children all have chores and help to clear up after breakfast, before starting classes – having a break after a few hours to help out with the farm.

Everyone mucks in to make a simple lunch of sandwiches or leftovers, before the younger children have a nap and the others watch a film or do their chores.

Chris is usually back from work for dinner, but sometimes works late, doing odd jobs around the town, like building, landscaping or helping with renovations, to bring in extra cash.

Also conscious of the environment, Courtney uses cloth nappies and wipes during the day and bamboo ones at night, which can be composted.

Courtney has been advised by doctors after her c-sections to leave a longer time between her pregnancies, but she isn’t too worried – having a big, healthy family is the most important thing.

‘I’ve been told there is a higher risk of haemorrhaging if you have lots of babies, but I don’t worry about it, as I try and give birth in hospital and they’re prepared,’ she said.

‘I had my first baby when I was 25. I didn’t think they would all come so fast, but, of course, I wouldn’t change that. ‘

Of course, as happy as Courtney is to have a large family, life with ten children is ‘challenging’.

‘It stopped me from doing anything alone,’ she said. ‘It’s easier now they are all older.’

But the mum doesn’t regret a thing, and will quickly defend her choice to have so many children to any naysayers.

Courtney said: ‘I have been criticised for having my children so close together, but I take good care of myself and my babies.

‘The people who ask how I can give all my kids enough attention are usually those who send their kids off to school.

‘I do not understand their logic when I am around my kids 24 hours a day.’

And Chris, who hasn’t ruled out trying for baby number 12, can’t wait to welcome another daughter in time for Christmas.

He said: ‘It gives me such pleasure to see the children growing up.

‘Each have their own gifts, and I love to see them using them around the home and at church.’

Coronavirus Victoria: What do the changes mean for Melburnians?