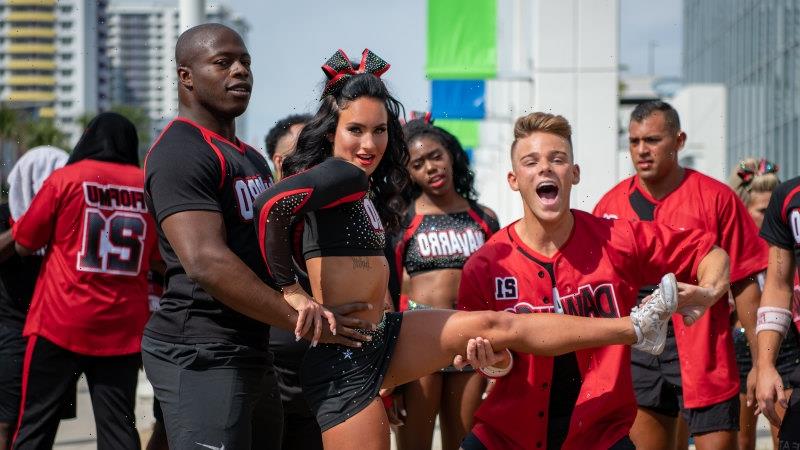 While the new season shifts the focus to a fresh group of cheerleaders, one recent graduate remains in the news: Jerry Harris, the Navarro cheerleader whose “mat talk” and constant optimism in Season 1 made him a talk-show darling, has cast a shadow over the show. Twin teenage boys sued Harris in September 2020, accusing him of sexual abuse. He was also arrested that month on federal charges related to child sexual abuse imagery and remains in custody. 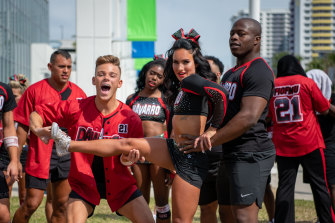 Gabi Butler and TT Barker in season two of Cheer.

The nine-episode season addresses the case from the start and includes an hour-long episode featuring on-camera interviews with Harris’ former cheerleading teammates from Navarro; the team’s coach, Monica Aldama; the brothers who are suing Harris; their mother; and the USA Today reporters who broke the news.

Here’s what to know about the accusations against Harris, who is now 22, the status of his case and where Season 2 picks up.

What is Jerry Harris accused of?

In September 2020, the twin brothers, who were then 14 years old, filed a lawsuit in Texas accusing Harris of sending them sexually explicit messages via text and social media, demanding they send him nude photos of themselves, and, while at a cheerleading competition in 2019, asking one of them for oral sex. Harris befriended the boys when they were 13 and he was 19, USA Today reported. Harris, of Naperville, Illinois, was arrested by the FBI in September 2020 and charged with production of child pornography. 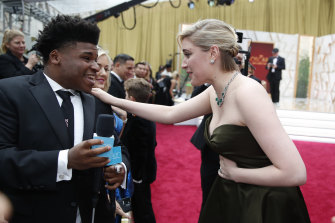 Greta Gerwig, right, talks to Jerry Harris on the red carpet at the Oscars at the Dolby Theatre in Los Angeles in 2020.Credit:AP

In a voluntary interview with the FBI after his arrest, Harris acknowledged that he had exchanged sexually explicit photos on Snapchat with at least 10 to 15 people he knew were minors; had sex with a 15-year-old at a cheerleading competition in 2019; and paid a 17-year-old to send him nude photos.

In the months that followed, federal agents interviewed other minors who said they had had relationships with Harris. In December 2020, they filed additional charges against him including four counts of sexual exploitation of children, one count of receiving and attempting to receive child pornography, one count of travelling with the attempt to engage in sexual conduct with a minor and one count of enticement, for a total of seven counts related to five minor boys. The indictment says these acts took place between August 2017 and August 2020 in Florida, Illinois and Texas. If convicted, Harris could face 15 to 30 years in federal prison.

How has Harris responded to the accusations?

In December 2020, he pleaded not guilty to the multiple felony charges. Harris’ lawyer, Todd Pugh, did not respond to requests for comment Monday.

Where does the new season of Cheer pick up?

When we left the Navarro College team at the end of the first season, it was after they had won the 2019 junior college division of the National Cheerleaders Association and National Dance Alliance Collegiate National Championship in Daytona, Florida. Cue a Today show invite, an Ellen DeGeneres Show appearance and an SNL parody.

Season 2 began filming in January 2020 but came to a halt amid the pandemic shutdowns. The 2020 national championship was cancelled because of COVID-19. Filming resumed in September 2020, tracking the team’s journey to the 2021 championship in April. (We won’t spoil it here, but if you want to know how they fared, well, we won’t stop you.)

This season, the series follows the new cheer team as they get ready to compete against rival Trinity Valley Community College. It also follows a few cast members from Season 1 (Gabi Butler, La’Darius Marshall, Lexi Brumback and Morgan Simianer all return). 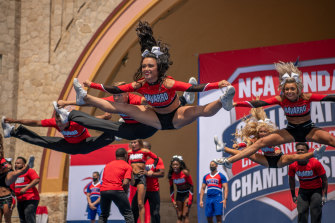 Maddy Brum in the new season of Cheer.

It addresses new challenges the team has faced since it claimed the 2019 title, including the departure of the head coach, Aldama, to compete on Dancing With the Stars in Los Angeles. She made it to Week 7 out of 11, but was away from her squad when the allegations against Harris became public in September 2020.

How does Cheer address the allegations?

After Harris’ absence is mentioned in Episode 1, the show devotes almost the entire hour of Episode 5 to examining the case. It includes interviews with the twins, who discuss their decision to go public and the fallout from the accusations.

The episode also includes interviews with Harris’ former teammates, who struggle to reconcile the bubbly, positive cheerleader they thought they knew with the crimes he is accused of committing. Aldama reveals that Harris wrote her a letter in which he said he hoped to become a motivational speaker one day.

Where is Harris now?

Harris has been held without bond at the Metropolitan Correctional Center in Chicago since his September 2020 arrest after a judge suggested he would pose a danger to the public if released. No trial date has yet been set. A case status hearing is scheduled for Wednesday.