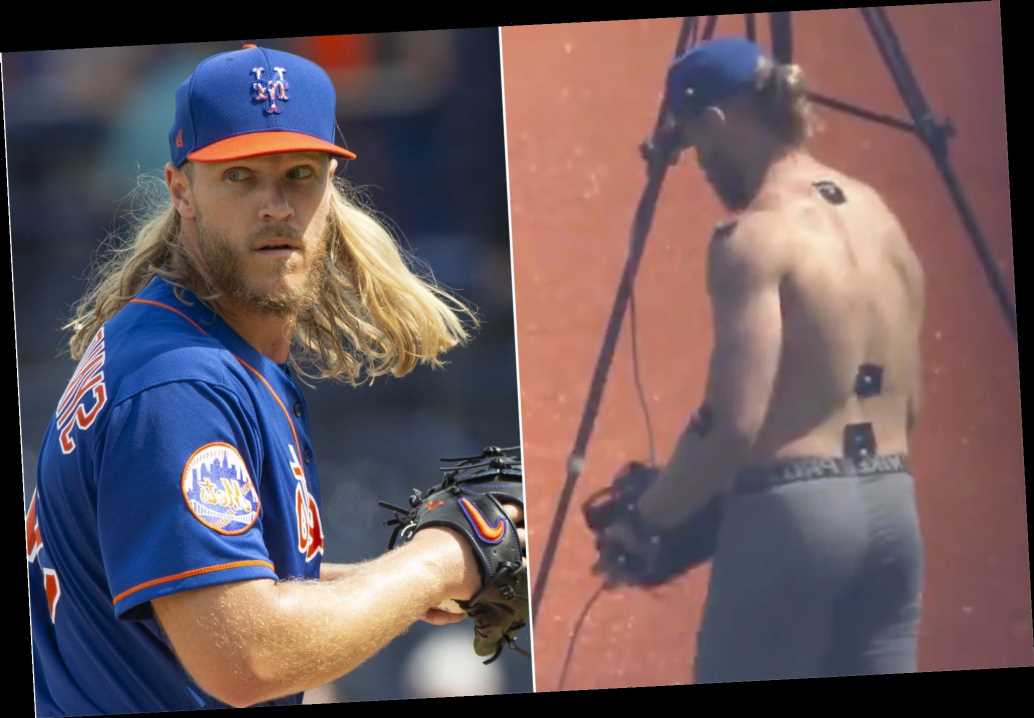 PORT ST. LUCIE — A day after cameras focused on Noah Syndergaard throwing — shirtless again — with wires and sensors attached to him, the right-hander tossed three solid innings Sunday in his third start of the Grapefruit League season.

He and the Mets are hoping the advanced technology employed by the organization and new pitching coach Jeremy Hefner can help Syndergaard — and the rest of the staff — be more effective.

Whether it’s motion-capture technology, TrackMan or Rapsodo, Syndergaard believes he can become a more well-rounded pitcher — once he figures out what it all means.

“It’s great,” Syndergaard said of the new information he’s receiving. “I think where baseball is going is access to the data and technology we have and using it, not in a cheating way. I think it’s great.”

That was a not-so-subtle dig at the Astros, who Syndergaard limited to one run over three innings in a 3-1 win at Clover Park.

Syndergaard added he “didn’t even notice” the boos that flooded down from the stands when most of the Astros’ regulars came to the plate.

For Syndergaard, it was more important that he continued to get results — and he was especially pleased with the results he got with his slider.

“It was pretty good,” Syndergaard said.

His new manager, Luis Rojas, has liked what he has seen from Syndergaard and thinks the 6-foot-6 pitcher can deliver even more.

“The more you learn yourself, the more adjustments you can make,’’ Rojas said. “He’s getting his slider to translate from bullpen to games. The feedback he’s getting and the research and work he’s doing with Hefner helps him understand what his pitches are doing and how they are moving. It tells you how you get swings, ground balls, and make pitches play. Right now, it’s paid off.”

The real test comes in the regular season and Syndergaard said he’s just in the initial stages of being able to use the information being gathered.

“I’m not really sure [how to use the information],” Syndergaard said “We’re just really scratching the surface on what it’s really capable of.”

Saturday served as something of a trial run to help determine baselines for different pitchers so they could compare the results for starts down the road.

Last month, Hefner told The Post’s Ken Davidoff that while new technology has changed the way pitching coaches deal with their staffs, he’s not completely altering how things are done.

“I don’t like the ‘old-school, new-school’ terms,” Hefner said. “Being able to have a relationship with the player, that will never go away. TrackMan’s great. Rapsodo is good. Edgertronic is great. Motion-capture technology is incredibly helpful. They all serve a purpose just like any tool.”

“I saw it from my angle in the third-base dugout, the depth and difference of velocity,” Rojas said. “You saw a lot of swing and misses with the slider. He can throw it for a strike. He threw it for chasing down and away to righties.”

And the pitch will only make Syndergaard more dangerous.

“It expands his repertoire,” Rojas said. “He’s always been known as a power pitcher. I know he’s had a curve that separates his velocity, but this is more of an action pitch for him. It contrasts more with his velocity from his fastball. And getting the break, it’s a really important pitch for him. … The last two outings are probably the best I’ve seen him.”