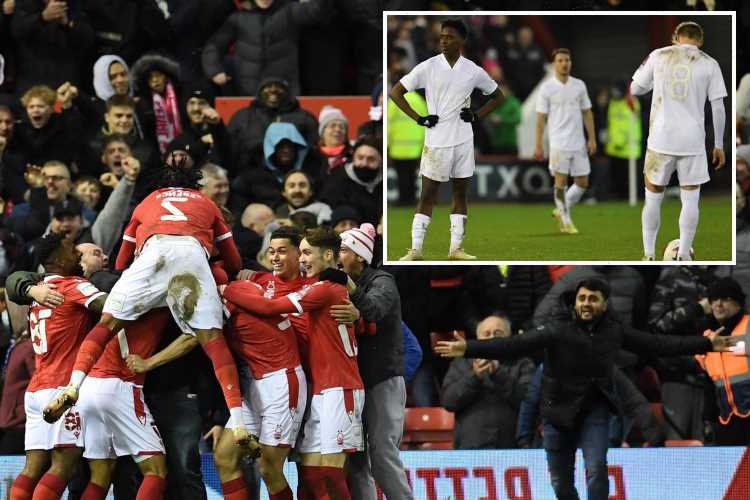 ARSENAL began the night in white – but were left red-faced after being dumped out of their beloved FA Cup.

The Gunners have failed to make it to the fourth round of the cup for the first time in four years after Lewis Grabban’s 83rd minute winner. 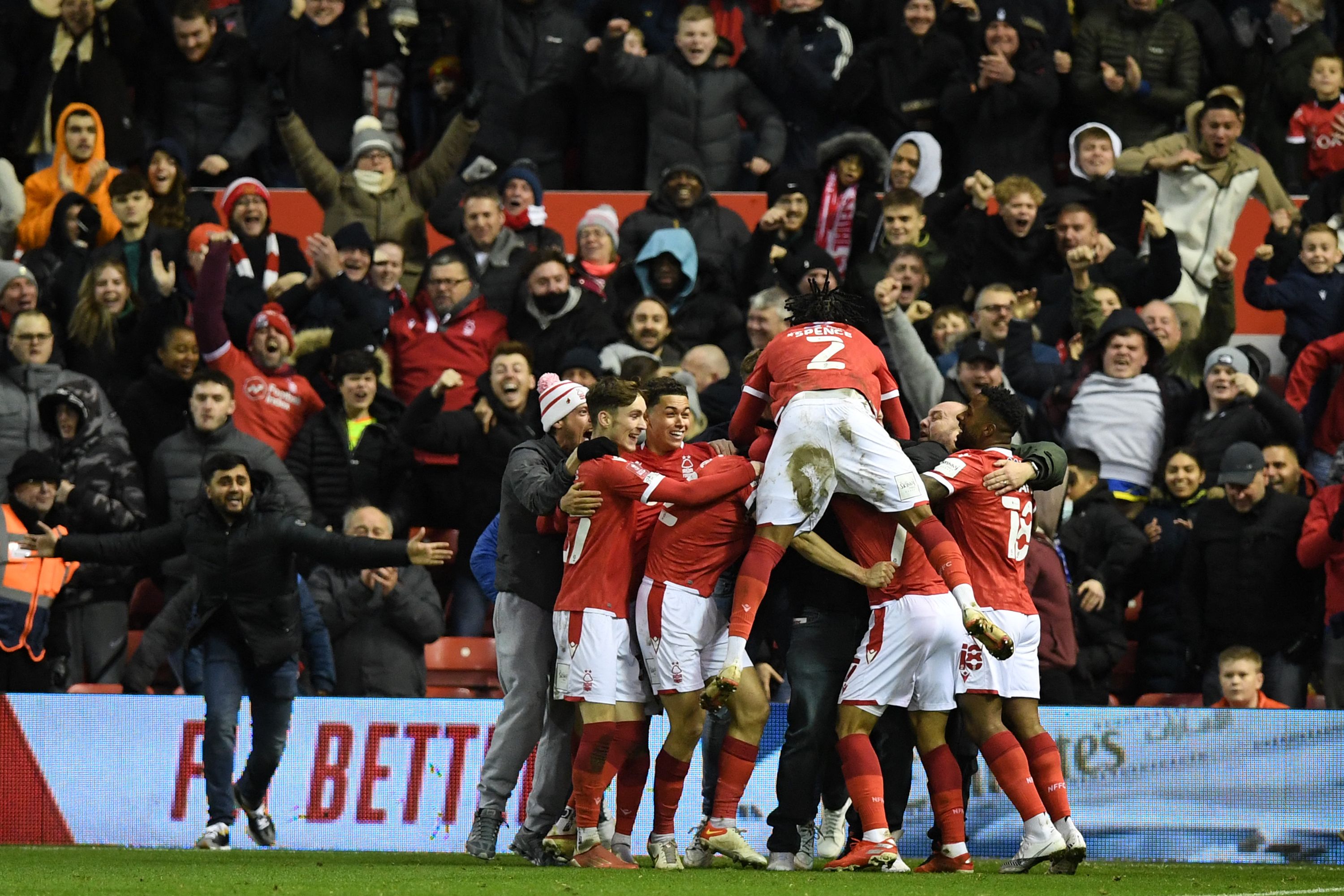 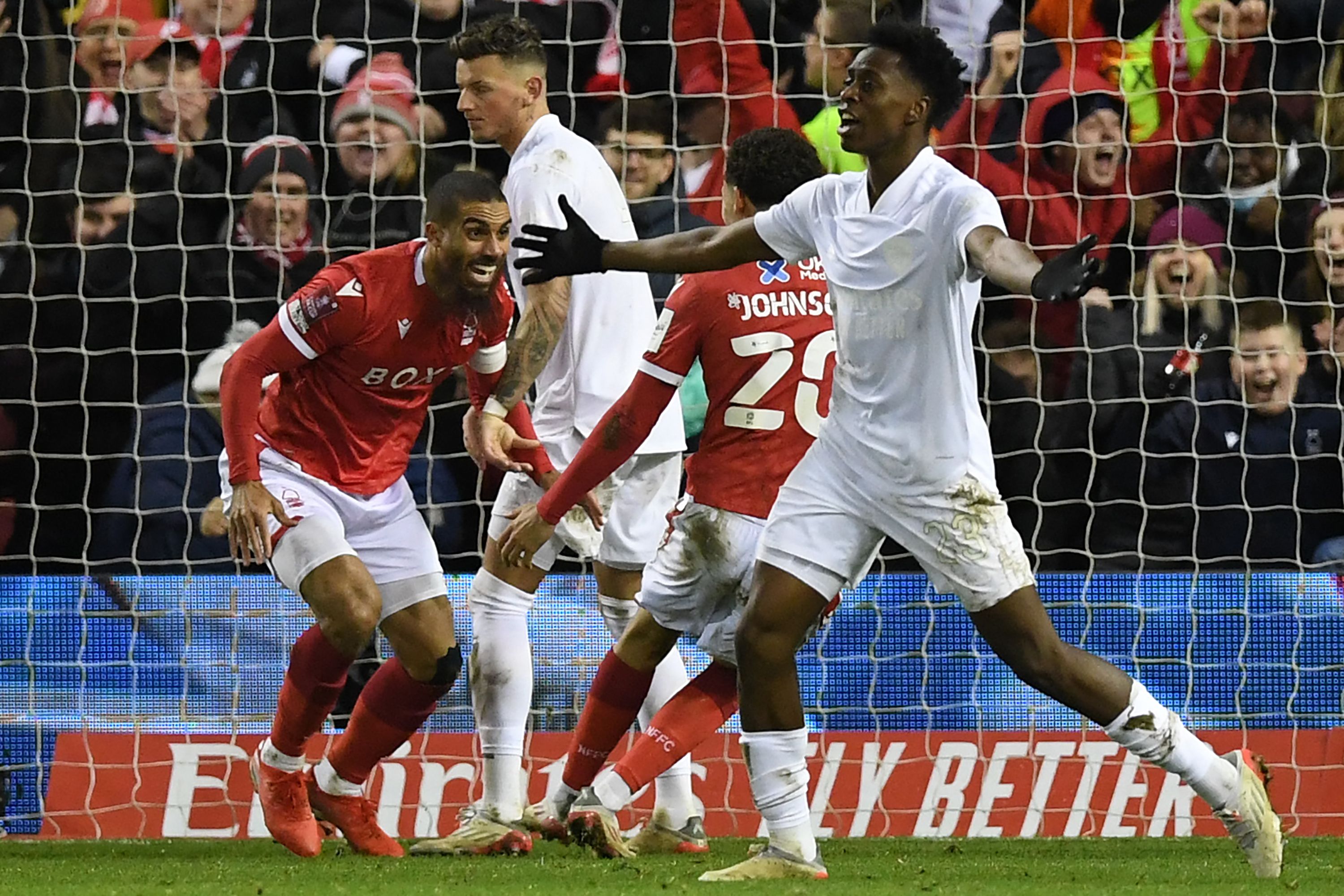 That too was a disastrous loss to Nottingham Forest at the City Ground – and it's just the second time since 1996 they've fallen short in the third round.

Wearing an all-white kit to promote their ‘No More Red’ London knife crime initiative, Mikel Arteta’s men were unrecognisable from the team that played Manchester City off the park on New Year’s Day.

Arsenal – 14-time winners of this competition – really were woeful, summed up by left-back Nuno Tavares being yanked off after just 35 minutes before pulling a Mesut Ozil-style touchline strop.

And Forest – revitalised under boss Steve Cooper – made them pay in classic FA Cup style to book a fourth-round spot against Leicester back at the City Ground.

On a weekend of brilliant and heart-warming upsets, add this one to the scrapbook.

After going so close to beating City last week, Arteta made wholesale changes with some being forced upon him. 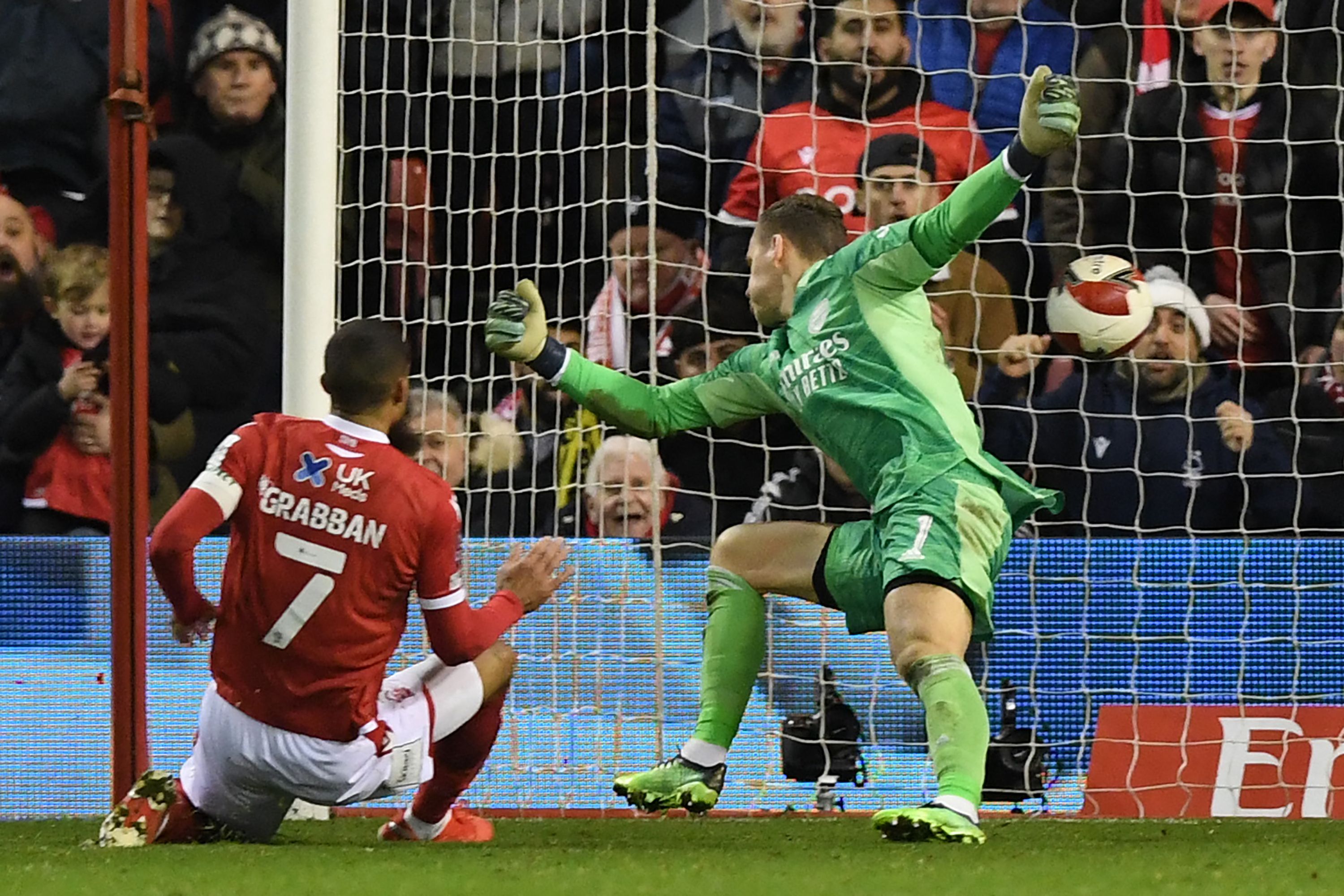 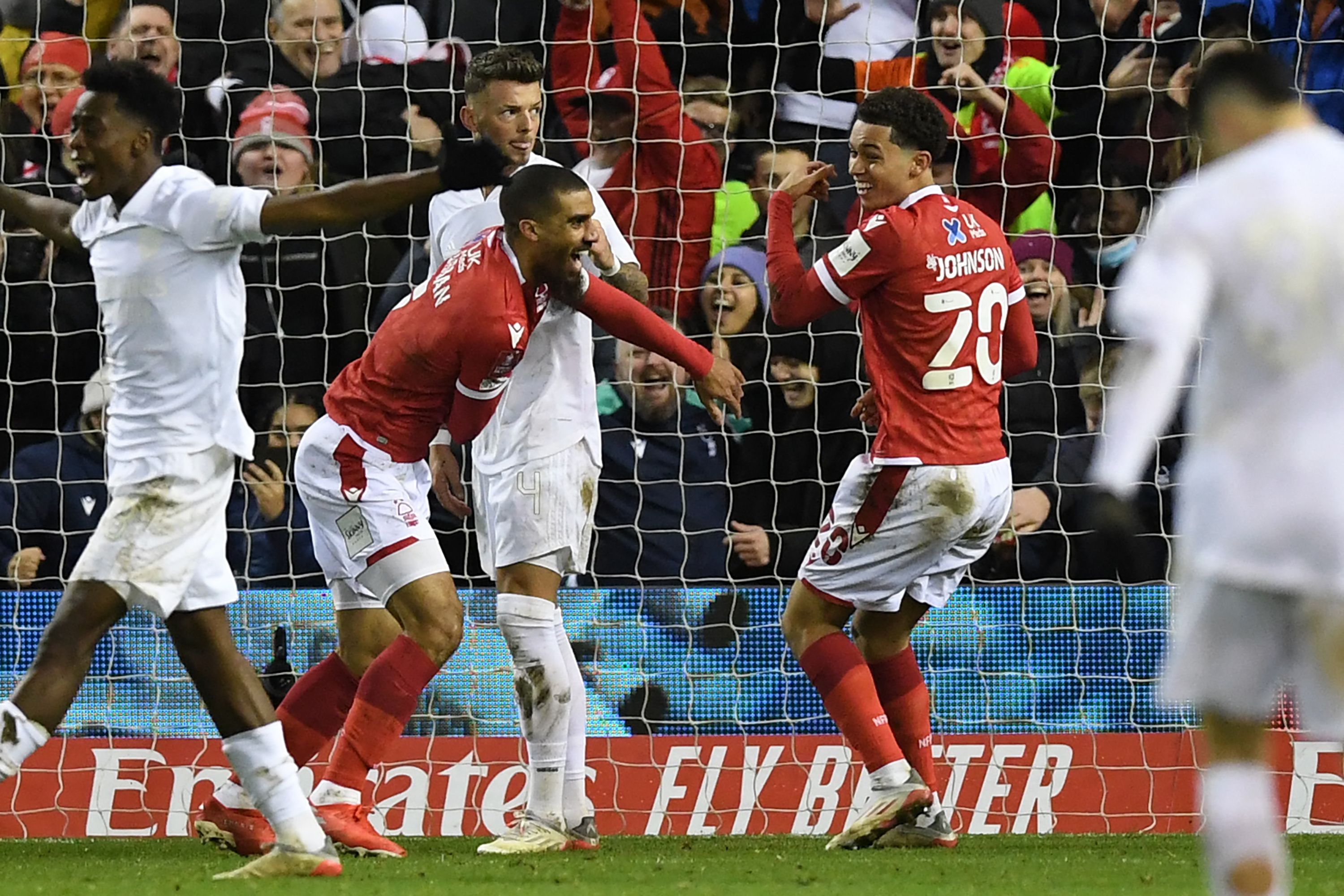 Draw as Arsenal or Forest play Foxes, Man Utd or Villa vs Boro in fourth round

MY NIGHT WITH GREALISH

Jack invited me to a party night thriller at villa, says Towie Chloe

Thomas Partey is currently with Ghana at AFCON, while Granit Xhaka – as well as Folarin Balogun – missed out after testing positive for Covid-19.

That meant young prodigy Charlie Patino, 18, got his first senior start in Arsenal colours, on this occasion that was all white, alongside Albert Lokonga in a new-look midfield.

This was still a strong Gunners side however, up against a Forest team on the rise under Steve Cooper with new signings Steve Cook and Keinan Davis making their full debuts.

A-list actor Idris Elba was pitch side pre-match promoting the visitors’ London knife crime initiative, meaning this tie really was set-up to be a Hollywood blockbuster.

In truth, the first half was a real big-screen flop – but at least there was a spiky tension to it created by a bouncing City Ground.

Aston Villa loanee Davis was outmuscling centre backs Ben White and Rob Holding in the air, and ended up face-to-face with the latter after an off-the-ball scuffle early on. 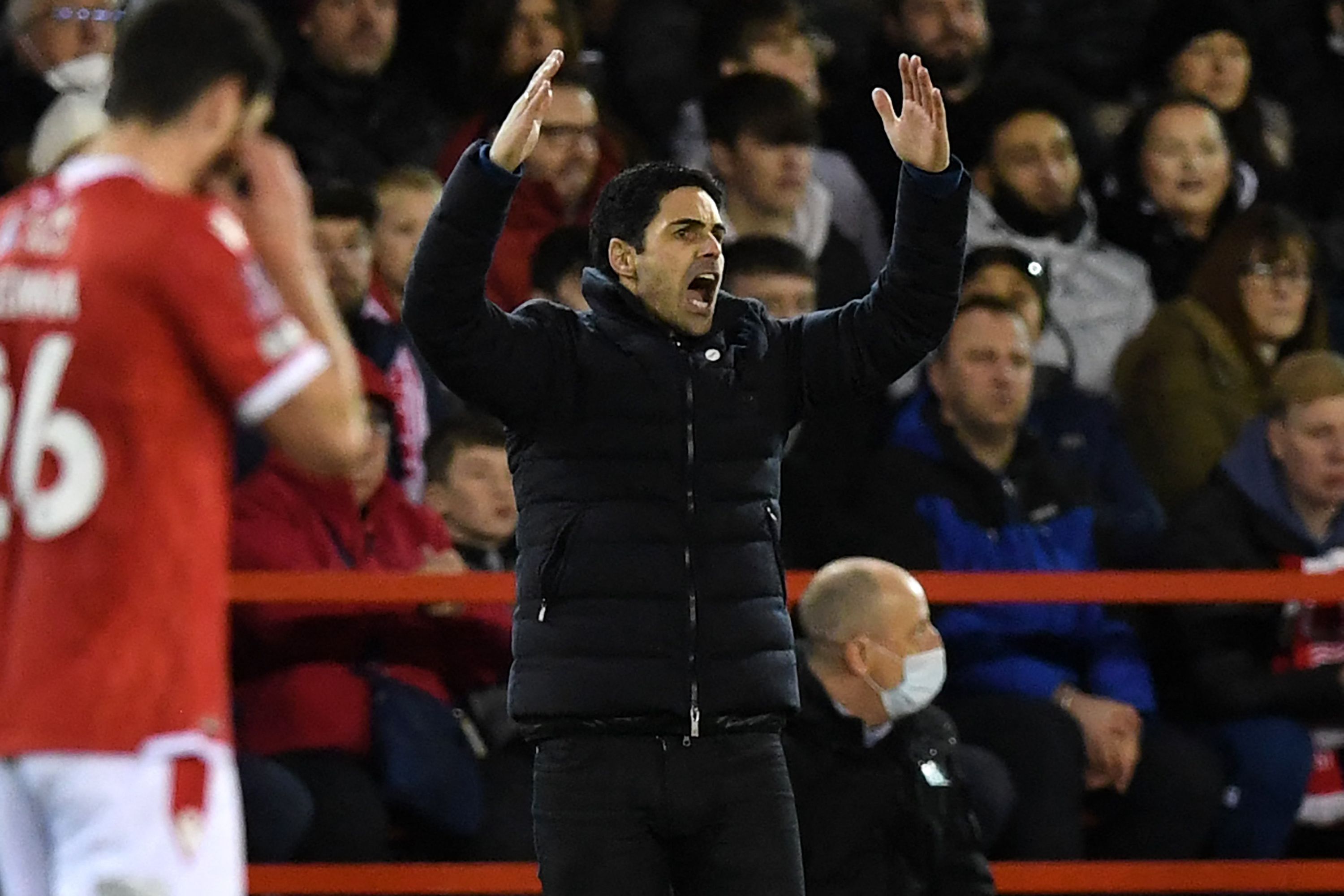 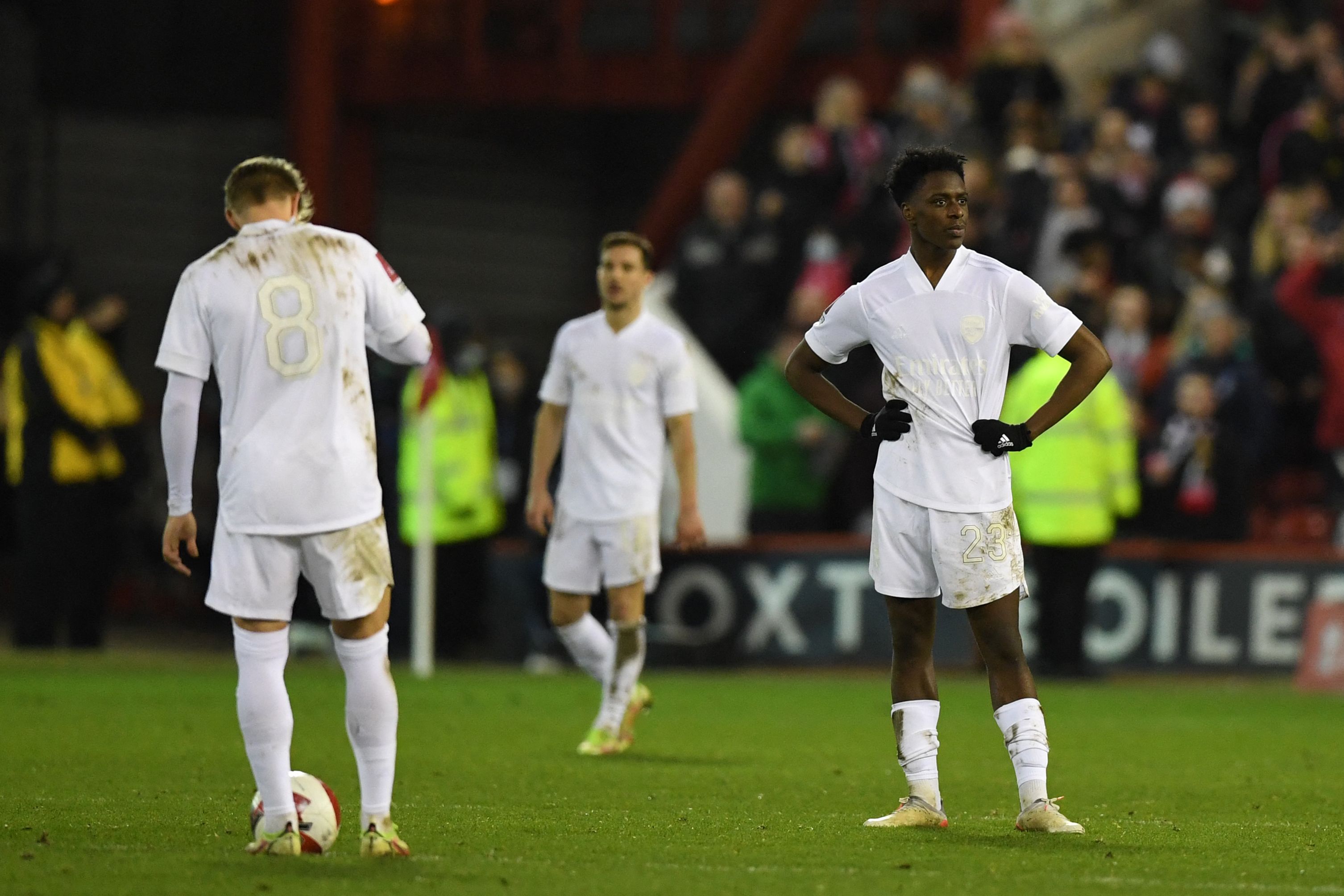 Yet it was Tavares who was earning the jeers from the home ground after a sloppy start that left Arteta chasing him up the left touchline from his technical area.

Forest’s Djed Spence was seriously showing the Portuguese left-back up with his emphatic runs forward.

Wayward passes, consistently getting caught out of position and a lack of energy in making up for those errors had Arteta send Tierney to get warmed up from the 21st minute.

Arsenal began to improve, with Eddie Nketiah and Lokonga going close with deflected efforts, but Tavares continued to frustrate Arteta and his assistant Albert Stuivenberg.

And in the 35th minute, with Tavares’ pass completion rate at 66 per cent, the change was finally made.

Tavares slowly walked off before undoing his hair band and then throwing his gloves to the floor near the dug-out. 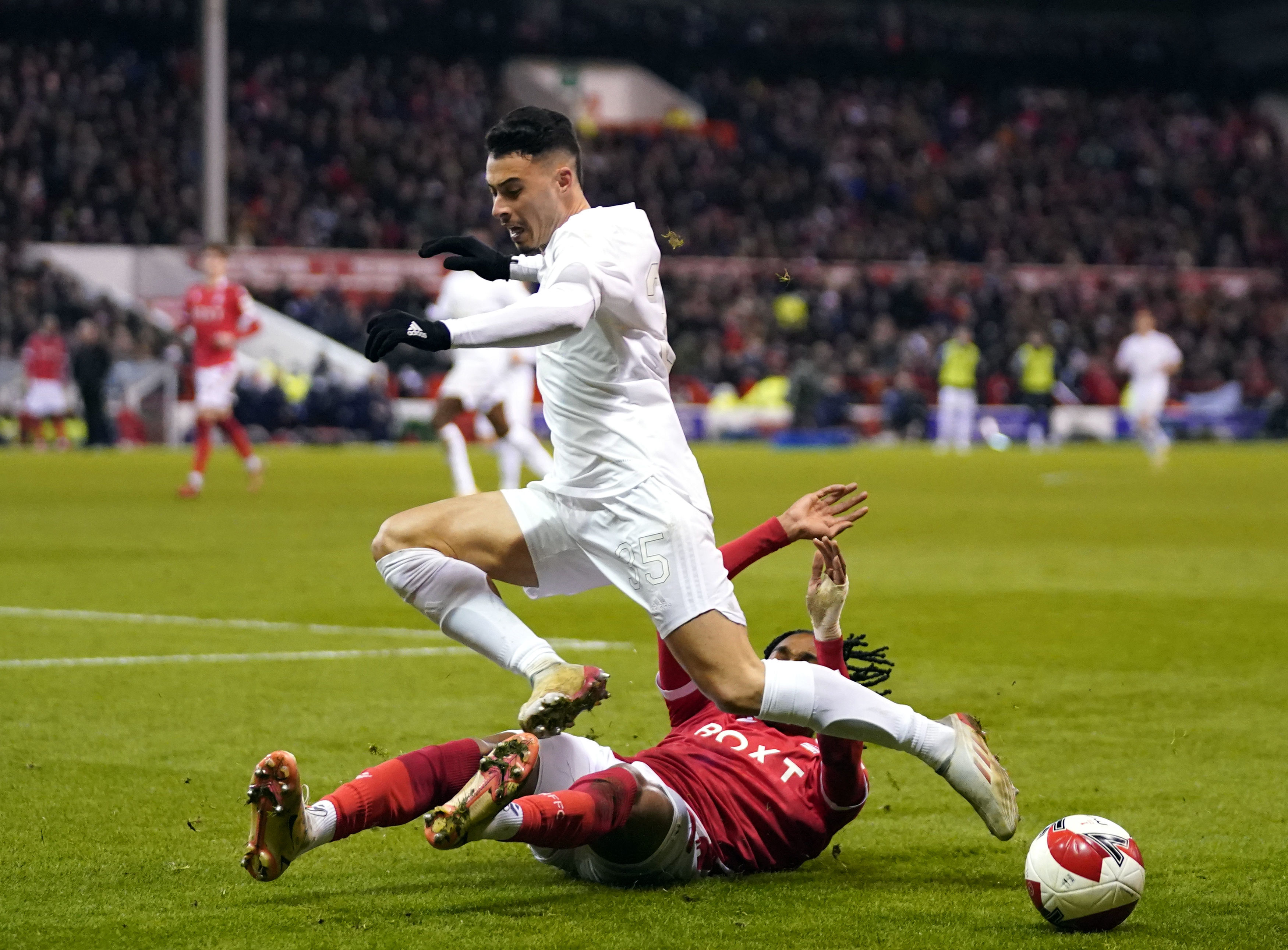 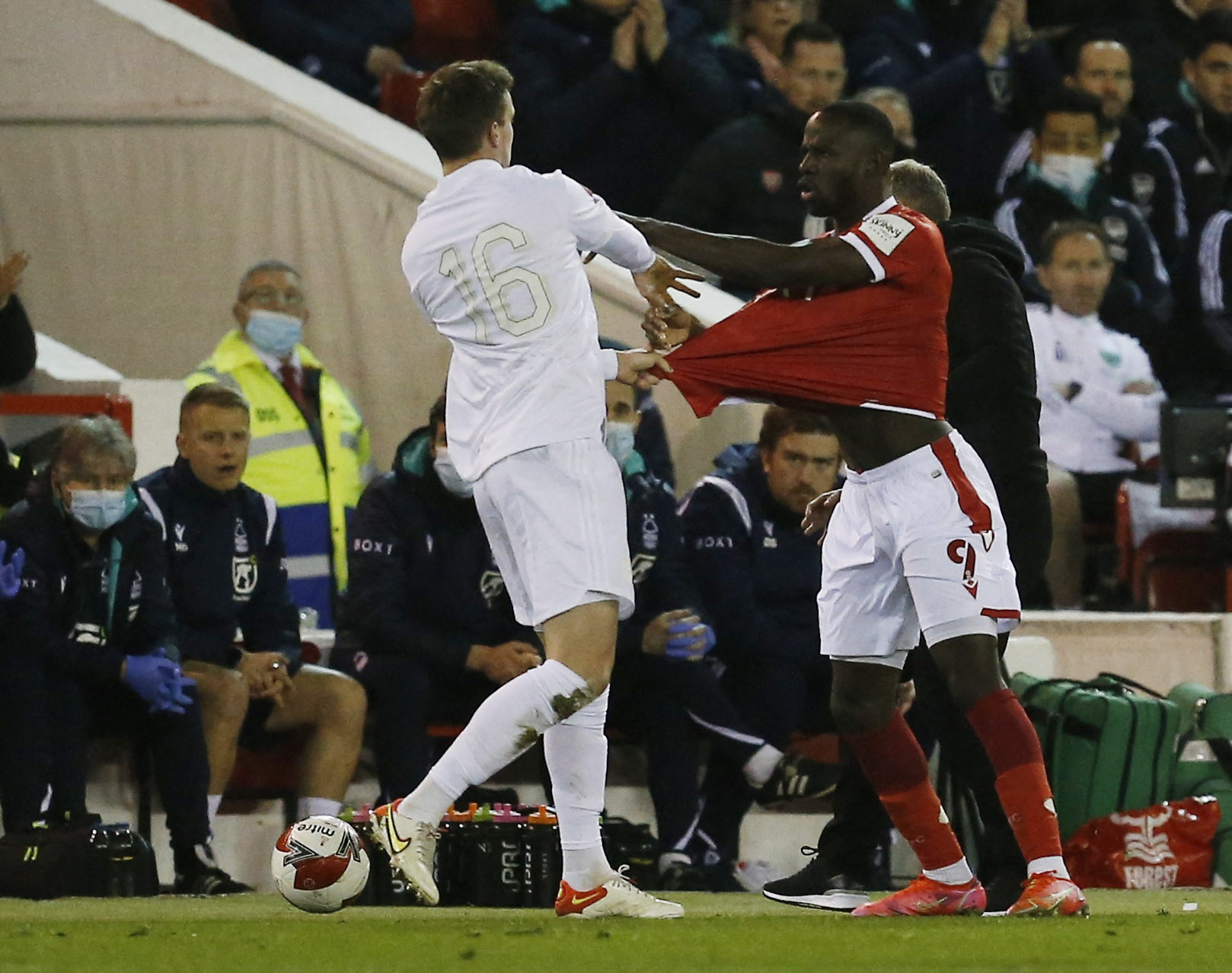 Arteta refused to acknowledge him, but one could sense he was raging. Tavares will be lucky to feature any time soon given his manager’s ruthlessness with those who act out.

An unneeded issue for Arteta who had watched his in-form side struggle against a well-organised ninth-placed Championship outfit, albeit one who looked toothless themselves.

As Roy Keane so delicately put it at the break: “Arsenal, they look like Real Madrid, but they are playing like a pub team.”

That pub team then almost went behind in the 53rd minute after a stunning counter from the hosts, sparked by Brennan Johnson’s silky flick over Holding on the half-way line.

His cross found Philip Zinckernagel only for his volleyed effort to be palmed away by Arsenal No.2 Bernd Leno – his first save of the night. 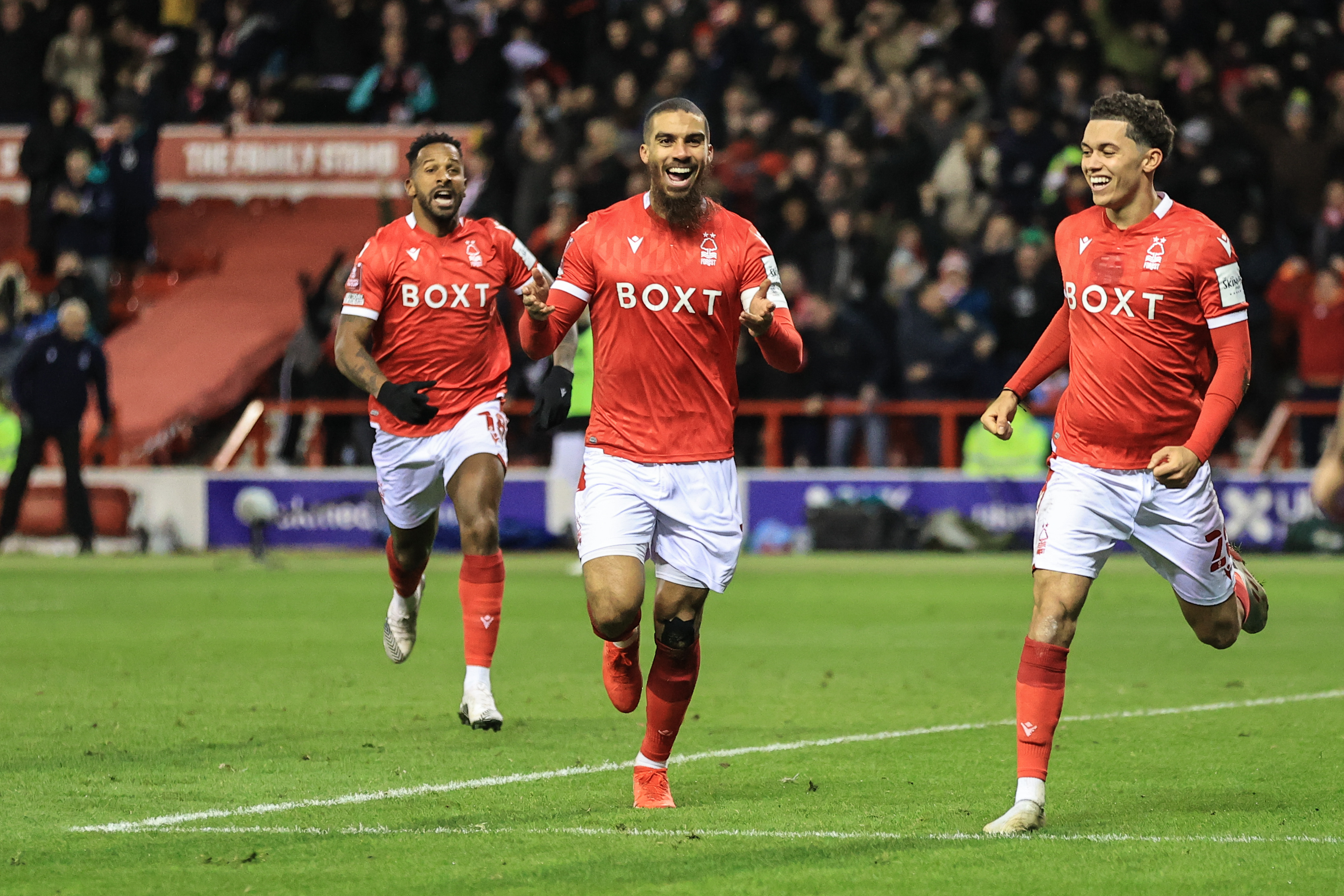 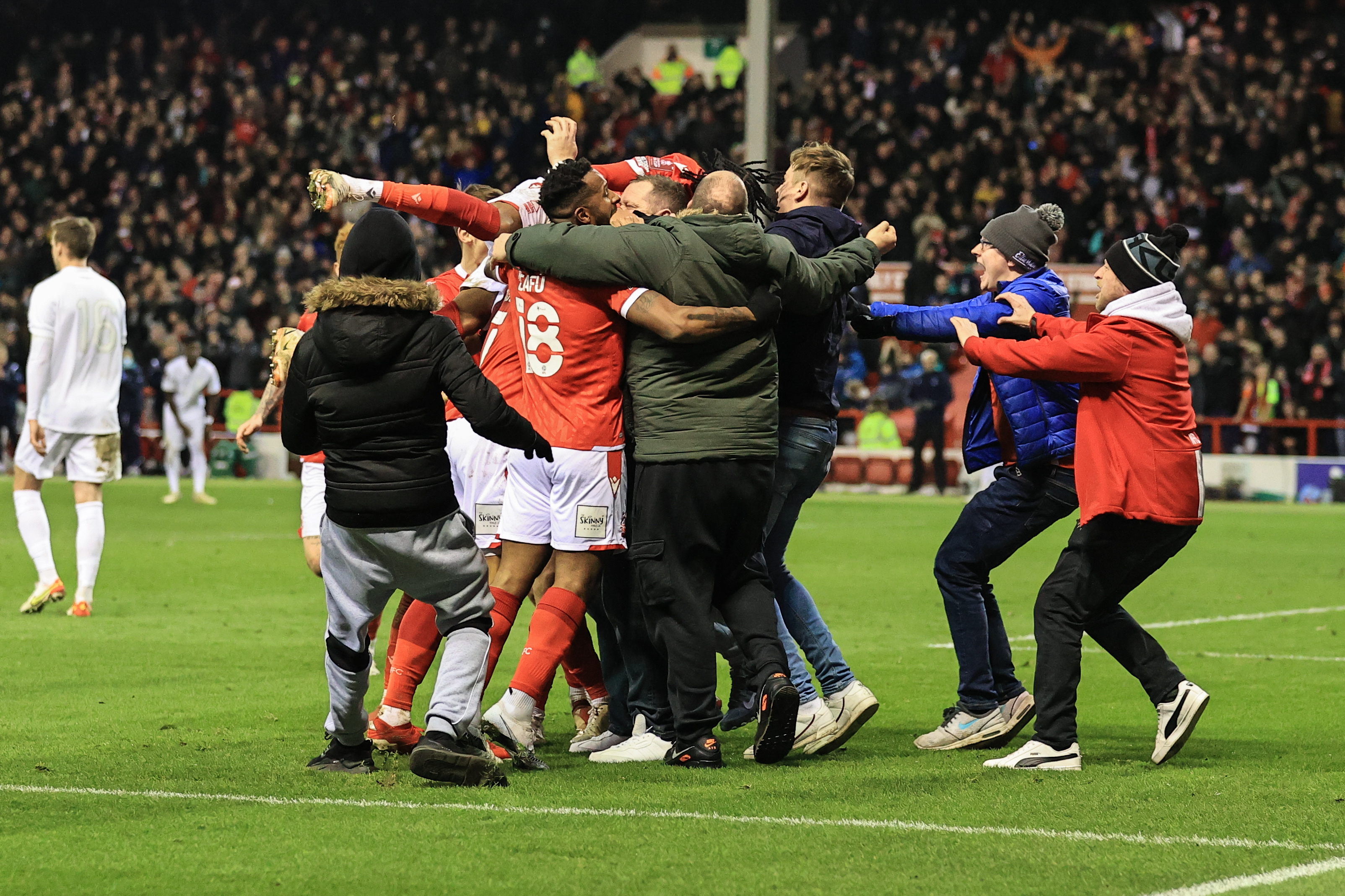 Arsenal responded with a chance of their own – Bukayo Saka’s dinked chip to the far post was somehow headed wide by Nketiah from a few yards out.

The 22-year-old – who has 5 goals in this competition – was saved by an offside flag.

Forest were gaining confidence regardless, and James Garner had his hands on his head after Leno produced a top save to stop a long-range free-kick from finding the top corner.

Arsenal were struggling to get any sort of grip on the game. Arteta had the look of a man who wanted to make more subs than he was allowed such was the sloppiness.

The Spanish coach made just the one – Patino making way for Alexandre Lacazette who dropped into an unfamiliar role of No.10 in search of some creativity.

The Frenchman was involved straight away, almost getting on the end of Saka’s low cross after a rare moment of accuracy from the boot of White from the back.

But the opener came from the hosts with time ticking away, sparking a mini-pitch invasion as Lokonga gave the ball away just inside his own half.

The ball was then spread to Ryan Yates whose pin-point cross to the far post found an outstretched boot of super-sub Grabban.

On a day when colour was wiped from Arsenal’s kit, the red of Forest lit up the FA Cup once more.