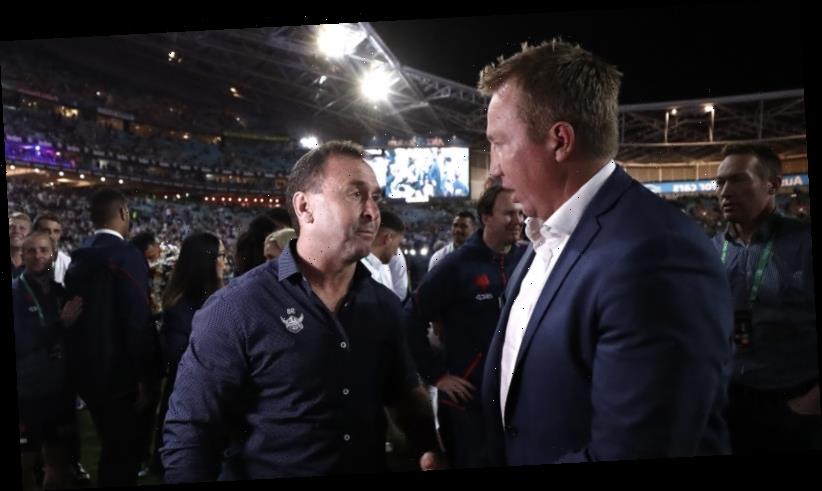 The captain's challenge is in danger of being hijacked by coaches with several clubs already plotting ways to send rapid-fire messages on to the field to assist their team.

Unlike the rules applied to both cricket and tennis with their video review systems, the NRL will not place restrictions against the captain looking to the bench and coaches box for instruction. 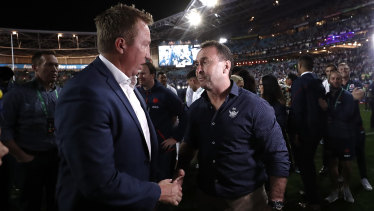 The Sydney Morning Herald on Wednesday approached five NRL coaches, who all believe – as one coach said – "there is more than enough time" for a team's analyst to watch the replay and relay the decision to the players.

The team analyst, who generally sits in the box watching the match and cutting up clips in real time on an editing program, also has access to instant rewind.

The NRL is comfortable allowing the captains to seek advice or approval from the club's coaching staff, but the governing body insists the 10-second challenge clock will act as a major hurdle in the coaches' ability to interfere.

One club is already planning to have a duplicate screen, which mirrors that of what the analyst is using, on the sideline to be viewed by club officials on the bench to assist the challenge process.

The NRL has largely been applauded for introducing the captain's challenge, which can only be used at a stoppage, however coaches have a long been renowned for bending the rules and exploiting loopholes to their advantage.

The concept, the brainchild of ARL Commission chairman Peter V'landys, was ushered in this week without the final approval of the competition rules committee – a first since the formation of the committee.

But the game remains unfazed by the potential of coaching interference.

"The captain, co-captain or another nominated player in their absence, is the only person authorised to challenge a decision," NRL head of football elite competitions Graham Annesley said.

"We don’t feel we need to dictate or mandate how a captain makes his decision – but he needs to confirm the details of the challenge within a very short timeframe.”

"We didn't have it tonight but we're looking at different ways to be innovative and bringing quick decisions where if we can get it from the top [of the coaches box] to the sideline," McGregor said after the Charity Shield.

"Or if the players see something and look to us to back up that support. We'll come up with different ways to make it clearer out there for sure."

Another coach has also identified the importance of making sure they don't waste their one unsuccessful attempt if the game looks like heading into golden point, highlighting the messy nature of field goals and how the challenge can be used to win or save a match.

In 2017, then Australian Test cricket captain Steve Smith was all but accused of cheating by India skipper Virat Kohli after he looked to the pavilion for guidance when he was given out lbw in Bangalore.

The rules in cricket clearly stipulate there is to no correspondence from anyone off the field, while there are also similar restrictions in place for tennis.

The NRL, who originally entertained the idea of allowing teams 15 seconds to challenge, doesn't believe there is a need to police the captain's challenge despite opening the door for coaches to interfere and take it out of the hands of their players.