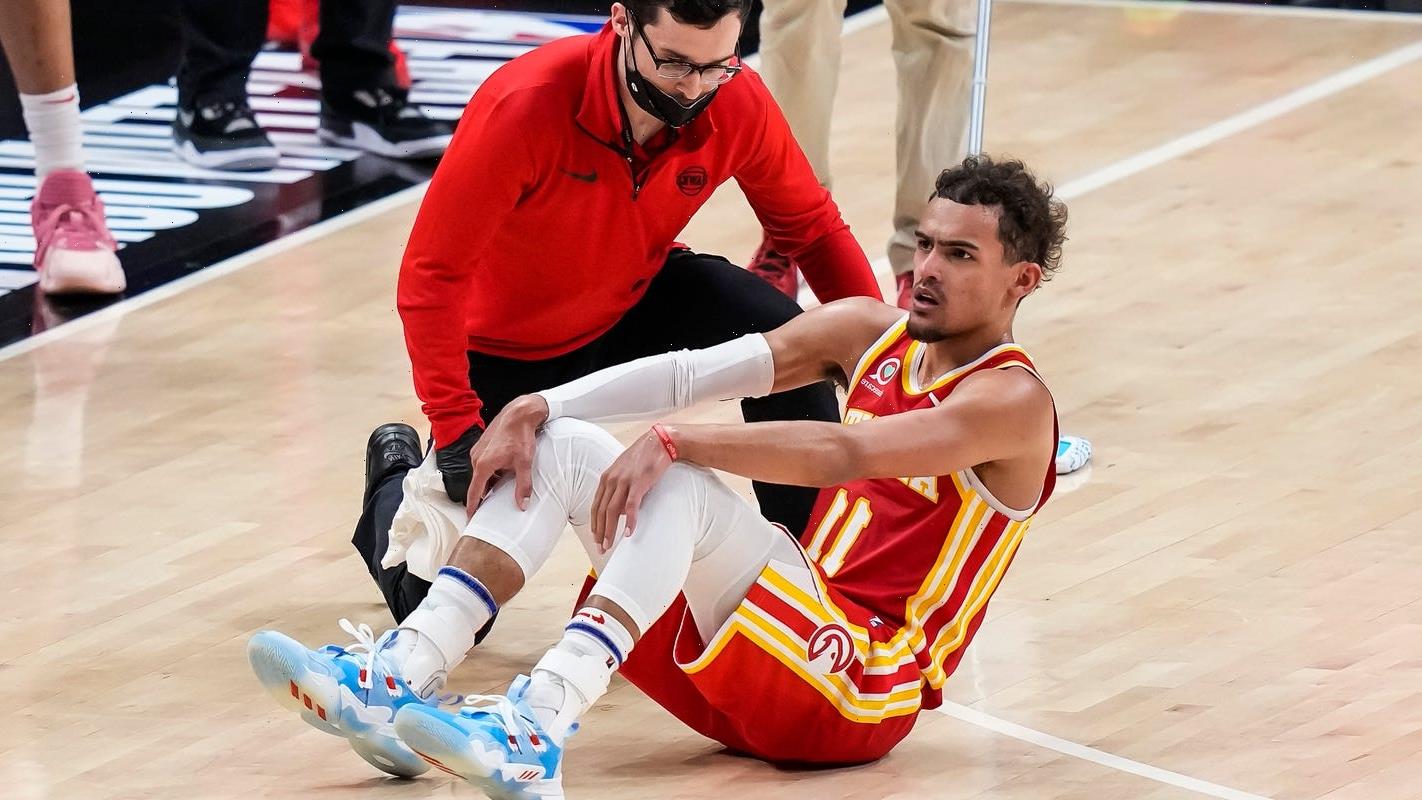 ATLANTA — The image of Trae Young in any kind of physical distress is an extinction-level scare for the Atlanta Hawks.

So when he was sitting on the floor at the most critical juncture of the Eastern Conference finals thus far, pulling at his right ankle while trainers examined him, it was by far the unluckiest of many unlucky breaks they’ve had to overcome on this improbable run.

Of all things that could go wrong, Young had stepped on the foot of referee Sean Wright with 29.3 seconds left in the third quarter Sunday. After a trip to the locker room, Young got back on the floor for his regular fourth-quarter minutes but he wasn’t the same. His aggressiveness and explosiveness had diminished to the point where he spent most of crunch time hanging out in the corner, not initiating key possessions like he has in every other close game in these playoffs.

“When he returned to the floor, he was obviously limping on that,” Hawks coach Nate McMillan said.

Young’s ankle only partly explains the Milwaukee Bucks emerging from Game 3 with a 113-102 win and control of the series at 2-1, but it very much symbolizes the Hawks’ predicament: Running out of steam, running out of healthy joints and ligaments and ultimately running out of time.

Needless to say, if Young is compromised or unavailable for Game 4, this is going to be a quick and forgettable ending for a team that has authored some moments that rank among the best this franchise has ever experienced.

But even if he’s able to bounce back, Atlanta is starting to look like a team that might have pushed this thing as far as it can go.

'DOMINATOR': Suns’ Deandre Ayton has lived up to nickname in postseason debut

Trae Young is attended to after injuring his ankle by accidentally stepping on an official's foot during Game 3. (Photo: Dale Zanine, USA TODAY Sports)

The Hawks didn’t just make the conference finals way ahead of schedule — and one season removed from finishing 14th in the East — they did it despite getting no grace from the injury gods, pretty much from beginning to end.

“It’s been a tough season in terms of injuries, especially this team,” Hawks reserve Danilo Gallinari said. “We’ve never played a game with a full squad, but everybody stepped up and we’ve had a pretty good season. We need to keep doing that.”

Certainly the Brooklyn Nets don’t want to hear any complaints about injuries, nor do the Los Angeles Lakers or the Utah Jazz or the Clippers. Injuries to star players have been a theme throughout this compressed NBA season, and if we end up with a Milwaukee-Phoenix matchup in the Finals, it will be both an obvious and true thing to say that the last two standing got there in large part because they stayed the healthiest.

It’s become fashionable to say that the Hawks are playing with house money in this series, but Game 3 made it clear that their challenge goes beyond a differential in top-end talent and playoff experience that the Bucks have built over time. Not only are the Hawks not as good as the Bucks, they seem to be getting unluckier by the day.

It would have been nice for the Hawks to have De’Andre Hunter, their superb 6-foot-8 defender who would have had a shot to slow down a Khris Middleton — but Hunter was lost after the first-round series against the Knicks with meniscus surgery.

It would have been nice for the Hawks to have a full-throttle Cam Reddish to throw some legitimate length at Jrue Holiday — but Reddish sat out for four months with an Achilles problem, and throwing a second-year player into the heat of a playoff series without any ramp-up is probably too much to ask.

It would have been nice for the Hawks to have a health Bogdan Bogdanovic, who was one of the NBA’s hottest shooters the last two months of the season — but Bogdanovic has been a shell of himself since suffering a knee injury in the 76ers series and is just five of his last 30 from the 3-point line.

And now, even after all that, the Hawks’ chances to pull one more upset may end up being felled by the flukiest of all fluke injuries involving someone who wasn’t even standing inbounds.

“Freaky bad accident,” said Young, who was up against the sideline when he reared back with his right foot to try and change directions and accidentally rolled it up on the official’s foot.

It’s impossible to know if Atlanta would have won had that moment never occurred. Young was having a great night up until the injury — he finished with 35 points on 12-of-23 shooting — but it was a close game the whole way. What we do know is that Young couldn’t play he way he normally does down the stretch, which has often been good enough for the Hawks to win in the playoffs.

“It’s sore right now,” Young said. “It’s hurting. It’s frustrating. I got some treatment on it, and I’ll get some more in the morning. I came back in and it was kind of sore and I couldn’t go as fast as I wanted to, and when I did it hurt. Hopefully it feels better for the next game.”

The Hawks have been so magical for the last month that you can’t count them out completely. This is still just a 2-1 series, and they’ve shown enough playoff toughness and confidence to be able to go into Milwaukee and win one more time.

But when their roster is this physically compromised and this limited in the ability to match up with Middleton or Holiday — Solomon Hill, who has scored five points in 53 minutes this series, is the only other guy they’ve been able to throw out on the wing — there’s not a lot of levers left to pull.

The Hawks’ resilience, particularly for a team with such a young core, has been a sight to behold throughout the playoffs. But with Young’s ankle now on the large pile of injury concerns, their longshot bid to make an NBA Finals looks like it might finally be falling apart.