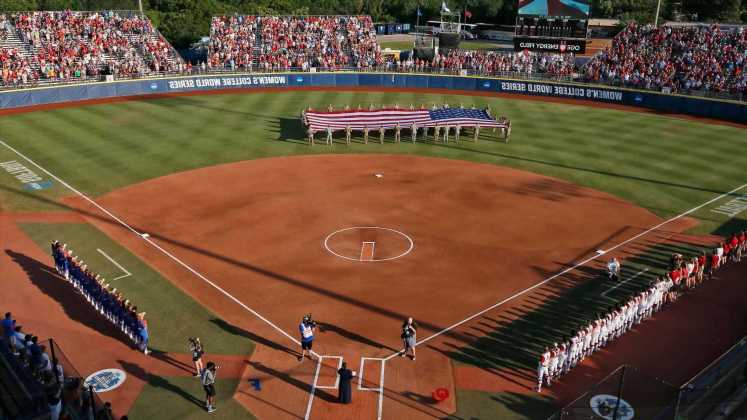 Should anyone come across a spine, or a conscience, please alert the NCAA. It is in sore need of both.

Not even a month after its Board of Governors came to the defense of transgender athletes and put the states who target them on notice, the NCAA caved to the bigotry. By selecting three states that recently legalized discrimination against transgender athletes as hosts for the postseason softball tournament, the NCAA told an already marginalized group of young men and women just how little their lives and self-worth mean.

Worse, NCAA president Mark Emmert and his cadre of toadies don’t even have the guts to defend their decision, declining repeated requests for comment from The Associated Press and not bothering to respond to USA TODAY Sports.

“The NCAA's lack of action in remaining silent as these bills were being discussed was a passive offense to transgender student-athletes, but this is an actual attack,” triathlete and transgender advocate Chris Mosier said Monday on Twitter.

“The NCAA is saying, clearly, 'We do not care about our transgender student-athletes.' "

The NCAA doesn’t care about student-athletes, period. It has slow-walked guidelines that would allow athletes to profit off their name, image and likeness; fought efforts by schools and conferences to provide more education-related compensation and benefits; and supported bald-faced misogyny.

And that’s just in the past two months!

But mean-spirited as those efforts are, they do not put anyone’s lives in dangers. Its latest act of cowardice does.

Selecting championship sites in states with discriminatory policies directly contradicts the NCAA’s stated commitment to providing environments that are safe, healthy, and free of discrimination.

Alabama, Arkansas and Tennessee have all passed legislation that effectively blocks transgender athletes from playing sports, forcing them to compete based on the gender they were assigned at birth rather than the one with which they identify. As if that isn’t draconian enough, Tennessee’s law also requires students to “prove” their gender if their birth certificate does not appear to be original or does not include a sex.

The Board of Governors, comprised of university presidents and chancellors at all levels, has recognized these laws for the dangerous nonsense they are. In a statement last month, it reaffirmed support for transgender athletes and said its championships should only be held in environments that are “safe, healthy and free of discrimination.”

In the past, that has meant principled stances against the Confederate flag and “bathroom bills” that also targeted transgender people. In this case, the NCAA said it was fine, just fine, with state-sponsored discrimination, awarding regional sites for the national softball tournament to the flagship schools in Alabama, Arkansas and Tennessee.

“While we have remained hopeful about the NCAA stepping up to the plate and taking action like they have done in the past, they are willfully ignoring that commitment this time,” the Human Rights Campaign said in a statement.

The majority of the public opposes these hateful anti-trans laws, recognizing that they will only “otherize” further a group that already has frighteningly high rates of suicide and depression. But the radical right is hellbent on inflaming the culture wars, and it doesn’t care if it has to twist facts to do it.

The lawmakers behind these bills claim they’re trying to “protect” girls and young women, ensuring they won’t lose their opportunities to compete. But the number of transgender athletes is miniscule, and there is no evidence they’re taking over women’s sports.

No one knows that better than the NCAA. Despite having rules to govern the participation of transgender athletes since 2011, cisgender athletes have not seen their opportunities to compete shrink nor have they been crowded off the podium.

(There are actual threats to women’s sports, like when the women’s golf regional in Baton Rouge was abruptly canceled last week without a single shot being hit. Not that you’ll hear any squawking about that by all those who profess to be soooo concerned about women losing their ability to compete.)

Because Emmert didn’t come out from behind his curtain, it’s not clear why the NCAA lost its spine. And, really, there’s no excuse he could give that would be acceptable.

Politicians are playing a dangerous game with the lives of transgendered children and young adults. Shame on Emmert and the NCAA for standing silent while they do it.