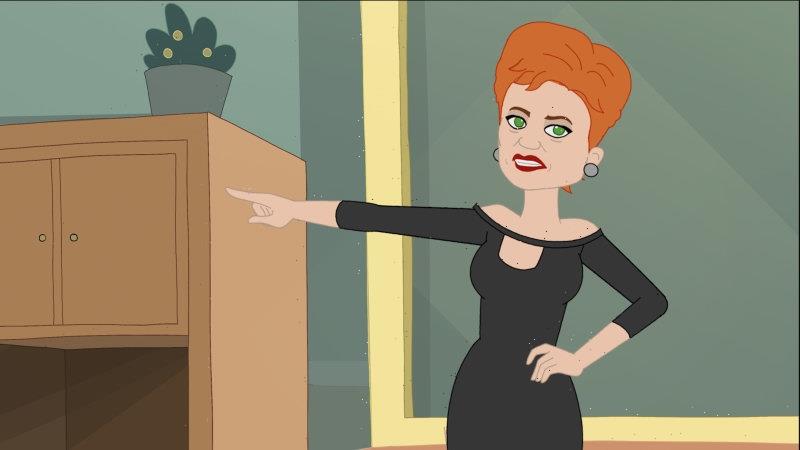 When One Nation reached out to tiny Melbourne animation studio Stepmates to ask if it could make a series of “educational” videos for Pauline Hanson’s micro party, co-owner Mark Nicholson says, “I honestly thought we were being set up as a bit of a joke”.

But they were serious. So serious that when Stepmates pitched a plan for six episodes the party’s chief of staff James Ashby had a counter-offer: make it 20. “We nearly fell off our f—ing chairs,” says Nicholson. 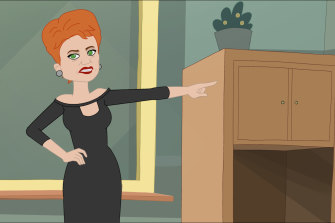 Pauline Hanson – voiced by herself – the teacher trying to keep an unruly bunch of pollie-students in line.Credit:Stepmates Studios

The first three episodes are on social media already and have racked up around 750,000 views in just under two weeks across all platforms.

On Pauline Hanson’s Please Explain channel on YouTube they sit alongside speeches against vaccine mandates, but the cartoons shy away from overt political statements, aiming instead to poke fun at pretty much everyone except Hanson herself.

The point, says Nicholson, was to appeal to a younger demographic “that’s not politically engaged. We’re hopeful it makes politics seem a little more accessible to youth, by showing its silly side.”

Nicholson and co-owner Sebastian Peart – who run the business, which employs six others, from the ground floor of their sharehouse in inner-Melbourne Abbotsford – are careful to maintain some distance from the party’s views, refusing to be drawn on such topics as immigration or climate change. But not so much distance as to alienate the client. 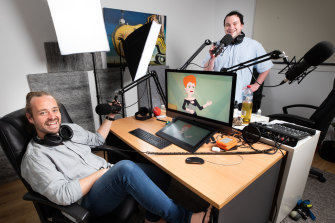 Stepmates says its mission is “To Make Australia Funny Again”, but claims they had the slogan long before Donald Trump adopted MAGA for his campaigning. Their aesthetic and humour is clearly indebted to South Park, but the pair – who started making parody live-action videos as a hobby a decade ago – says the move into animation was prompted by an act of carelessness.

“We had $15,000 worth of camera gear in a shell case on top of a car when Seb drove off at the end of a long day filming at the Comedy Festival,” Nicholson says. “We heard a noise but didn’t think much of it and just drove on. We didn’t even realise we’d lost it until three weeks later when we had the next job and realised the gear was gone.”

As penance, Peart taught himself animation. Nicholson, who studied law at Monash, writes and does most of the voices.

In 2019, they scored their biggest gig to date when Seven commissioned a series, Regular Old Bogan, for its digital channel 7Mate, but they have been churning out short-form comedy that skates on the edge of wrongness for years. 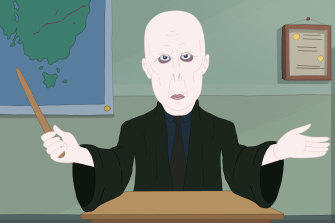 The approach from One Nation was spurred, Nicholson says, by a short called Dr Spectrum, in which a doctor with an Indian accent (voiced by Nicholson) spruiks the benefits of having your child diagnosed with a behavioural disorder. “Your child will go from embarrassing and naughty to placid and special. And also you will now be eligible for free money from the government … congratulations. Stop making your bad parenting the problem and get the diagnosis you deserve.”

That’s the sensibility Ashby wanted them to bring into the political space. Their response: “If you guys are willing to go bold, do something a little different, we’re in.”

In the One Nation series so far, the subject is the political system itself: where the parties get their money; how preferential voting works. Parliament House is a classroom, Hanson – voiced by herself – the teacher trying to keep an unruly bunch of pollie-students in line. 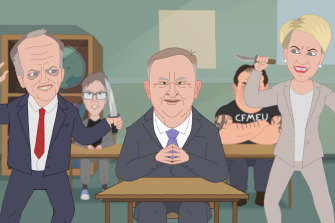 The characterisations, Nicholson readily admits, come straight from the work of the mainstream media’s political cartoonists: Peter Dutton is Voldemort, Bob Katter an unhinged chuckler, Craig Kelly a compulsive spammer, Clive Palmer Jabba the Hutt. Anthony Albanese and Adam Bandt suffer the cruelest caricatures (as a whiner and a do-gooder respectively), while Scott Morrison is the bogan class clown ScoMo, turning up late in Hawaiian shirt and thongs, chanting his nickname as if it were some genius marketing slogan.

Out front of it all is a Hanson supporter’s Platonic ideal of her: she is slim, young, in a little black dress, bringing patience and reason to this rabble.

“Pauline Hanson is basically your superhero in this depiction, here to clean up all the mess,” says Dr Andrew Hughes, lecturer in marketing at the Australian National University. “It’s very much picking up on Trumpism, but then again Don Chipp said the same thing when he founded the Democrats in the 1980s – ‘I’m here to keep the bastards honest’.”

Dr Stephen Mills, senior lecturer in social and political sciences at the University of Sydney, says the spots are effective vehicles for One Nation’s key messaging. 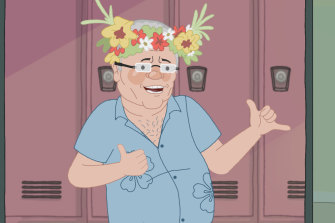 ScoMo is the class clown, with an overly inflated opinion of his coolness.Credit:Stepmates

“They present Australian politics as corrupt, a bit of a freakshow, and the major parties as collusive,” he says. “To portray Pauline Hanson as a schoolteacher disciplining the noisy children is clever, though somewhat bizarre given her own disruptive performances.”

There is a certain irony in the focus of the early spots on preferences – without which One Nation would have no parliamentary representation at all – and especially political donations. “We await the episode dealing with One Nation’s own notorious fundraising adventure with the National Rifle Association,” Dr Mills says.

The lack of policy detail is both deliberate and clever, says Dr Hughes. “The market for these cartoons isn’t people who want detail. It’s about making you like a person, which is far easier to do in politics. If I can make you like me as a leader, then you’re more likely to trust me.”

It’s not the first time animation has been used in a political context – Robert Muldoon’s Nationals famously enlisted US animation giant Hanna-Barbera for a campaign against Labor in the 1975 New Zealand campaign (and won government) – but most examples have been in the procedural space, typically designed to get out the vote (in the US and UK, where voting is not compulsory).

And it is likely that this sort of innovative, designed-to-go-viral campaign will become more common, as parties grapple with the need to appeal to younger voters. “This is a new frontier in terms of electoral communications,” Dr Hughes says. “The things you grew up with, like The Simpsons, will become more acceptable for use in political campaigns.”

Part of the appeal of spots like these (and part of their problem too) is that they skirt restrictions and obligations around political advertising, by virtue of the fact they are not technically advertising.

“Unless you pay someone to carry it, it doesn’t trip the definition,” Dr Hughes says. “Parties generating their own content get around so many communications laws. It’s fascinating, but where does it stop?”

Dr Mills, meanwhile, wonders if the portrayal of politicians as nothing more than a self-interested rabble “might further undermine the legitimacy and effectiveness of mainstream legislative politics”.

Of course, that kind of concern plays right into the sort of narrative the Right has made its own in recent years: “It’s just a bit of fun. You snowflakes take everything too seriously. Lighten up.” Meanwhile, the dog-whistling continues.

Nicholson is unapologetic, but he does see the irony in having Hanson cast as the sole voice of reason amid all this chaos. “It’s pretty funny, innit,” he says.

And given the professed political neutrality, what would Stepmates say if, by some strange twist in the tale, the Greens or Labor were to come knocking on the door?