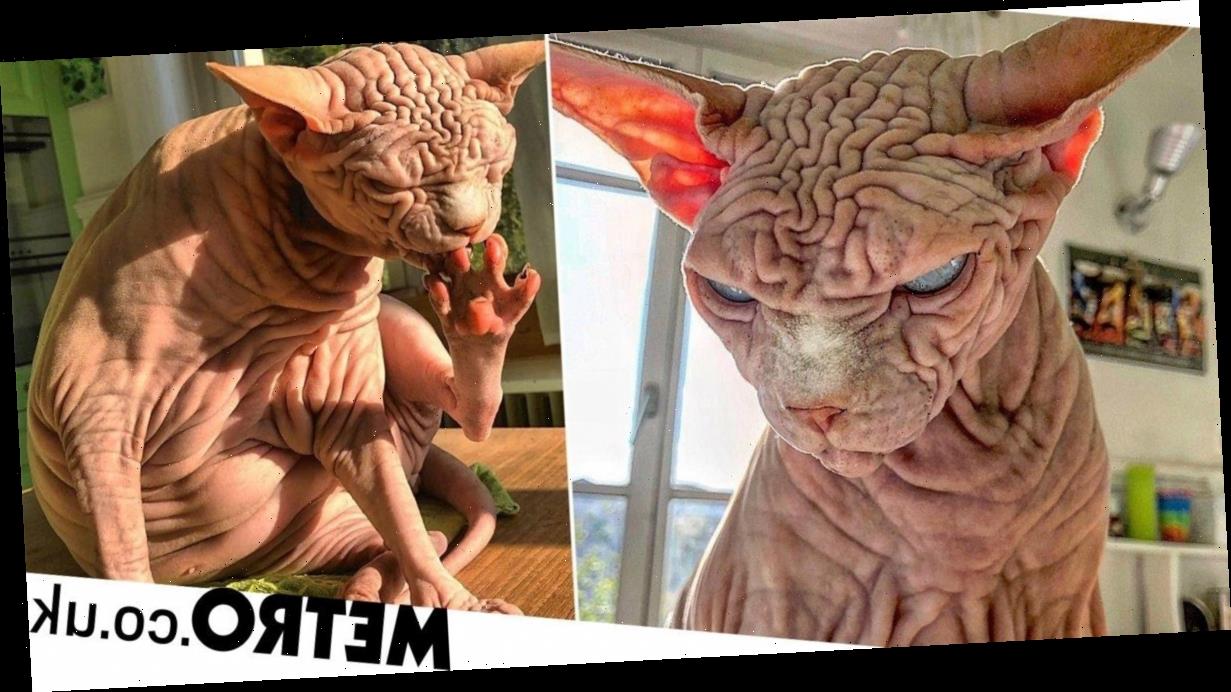 Sphynx cats might not be everyone’s cup of tea; you might remember on an episode of Friends, the pals tease Rachel about her $1000 kitty which they refer to as being ‘inside-out’.

Joey even insists that ‘it’s not a cat’. Sadly the little pink creatures don’t get the same love and adoration as their fluffier counterparts.

Xherdan the sphynx from Switzerland can relate.

The six-year-old is not only furless, but he is also covered in wrinkles from head to toe.

Unfortunately, his unique look has left strangers on the web comparing him to many different animals and objects, such as a caterpillar, an alien, a brain and a dumpling.

Xherdan is also well-known for his angry-looking frown, but owner Sandra Filippi, 47, says he’s a sweet cat who loves to sleep and ‘talk’.

She says that sometimes people are scared of Xherdan but he is just as loveable as any other cute cat.

Sandra said: ‘When I first saw him, he immediately stole my heart.

‘His wrinkled pink skin, as fine as a peach, and his turquoise eyes, I was in love! He has had this many wrinkles since the day he was born.

‘Xherdan is a very active cat and he talks a great deal, in all pitches, when he is excited, when he is hungry when he plays or while cuddling and falling asleep, he is like a child and his character is very lovely.’

According to Sandra, people are ‘a little bit scared’ at first but immediately start to love him when they find out how playful he really is.

Sandra also says that Xherdan, like most sphynx cats, requires a lot of care and attention to stay healthy and happy.

She adds: ‘I regularly clean his eyes, ears and feet, even the claws I have to cut. Sphynxes take up a lot of time, they always want to be where their humans are, that should not be underestimated.

‘Xherdy makes me and other people laugh, no matter in what moments, and that’s the most beautiful thing there is.

‘Most people are a little bit scared of Xherdan, but then when they meet him they love him!’

Do you have a unique looking cat?

Email metrolifestyleteam@metro.co.uk to tell us more.