Just over a quarter of Australians in the National Disability Insurance Scheme (NDIS) are fully vaccinated – behind the national average – with hundreds of thousands of people yet to have a jab despite being in the federal government’s highest priority groups.

The Sun-Herald and The Sunday Age can reveal new data, shared at a meeting of disability sector stakeholders last week by NDIS Minister Linda Reynolds, details just how far the rollout to some of Australia’s most vulnerable people is lagging. 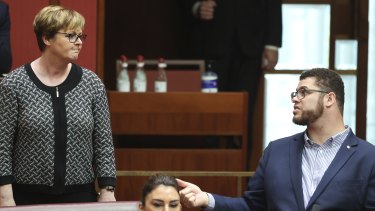 People with disabilities are among the most vulnerable to COVID-19 for a range of reasons, including due to cardiac conditions and immune-suppression.

As Australia battles its most serious outbreak of COVID-19 to date, just 26.9 per cent of the 267,526 NDIS participants aged over 16, who were in phase 1A or 1B of the vaccine rollout, were fully vaccinated, according to federal government figures. First doses have reached 44.9 per cent.

In comparison, 29.6 per cent of the general Australian adult population have had two doses.

Overall, 67.3 per cent of NDIS participants in group homes – about 22,000 people – have had one jab and 51.9 per cent have had two doses. These groups are in phase 1A of the rollout for priority access and were supposed to be fully vaccinated months ago. In comparison, all 2566 residential aged care facilities had two visits under the rollout by July 7.

Anne Kavanagh, a professor of disability health and an epidemiologist at Melbourne University, said the vaccine rollout for disabled Australians was “negligent” and a “failure”, and the consequences could be dire amid a surging Delta outbreak.

“This was meant to happen in March, it was delayed, the government held off until May or June and it’s still going at a glacial pace,” she said. “That’s not working, we still haven’t got a good system to get to people with disabilities who are independent in the community but can’t leave their homes.

“We are opening up vaccinations to everyone else when we haven’t actually vaccinated these people and we still have a disability support workforce who aren’t vaccinated. These are people who move around, many work in more than one group home, some work in aged care as well, half are casualised, their incentive is to go to work sick as they won’t get paid.”

People with Disability Australia president Sam Connor, who has Limb-Girdle Muscular Dystrophy and a heart condition, said recent outbreaks in disability care homes in Canberra and Newcastle highlighted the growing risk to disabled people and that it was “unconscionable that we have not protected the people most at risk”.

“They said that they would have the majority of people with disability in April this year … it’s now August and people with a disability are no less unsafe.”

Labor NDIS spokesman Bill Shorten said it was ironic Australians “will be amazed by the achievements of our Paralympians in Tokyo [from Tuesday], the government will sing their praises and rightly so, but their rhetoric doesn’t match the deficit of trust they have created with people with disabilities”.

“Just over a quarter of all Australians with a disability vaccinated is a national shame. That less than 50 per cent of people with disabilities living in group homes are vaccinated is a crisis.”

A spokesman for the federal Department of Health said the delivery of vaccines through an “in-reach model to people living in disability residential settings poses logistical complexities that are distinct from what has been required for aged care residential facilities”.

“Those complexities include people with disability having differing ages, capacity and functioning, and, critically, the additional time needed to ensure informed consent or appropriate decision-making for individuals before the vaccine is delivered and administered.