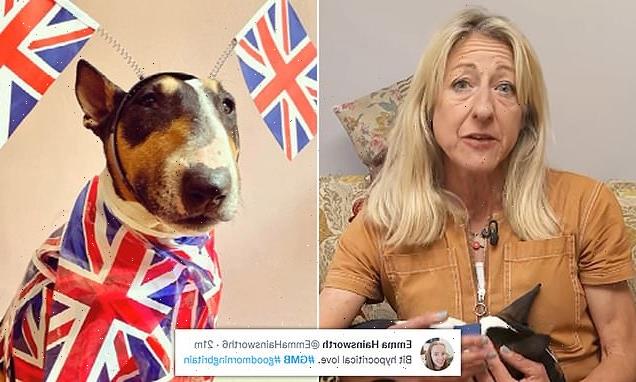 A pet behaviourist who was arguing against using animals for likes was branded ‘hypocritical’ by Good Morning Britain viewers after it was revealed she’d dressed her own dog in Union Jack flags.

Anna Webb, an East London-based expert, was left red-faced after Susanna Reid called her out for the snaps on today’s show, which showed her English Bull Terrier wrapped in the flags for the Queen’s Jubilee earlier this month.

The pet lover, who owns two dogs and a cat, had just been arguing against using animal pictures for likes on social media, and stressed the importance of respecting the pet’s dignity.

She claimed said some owners are ‘crossing a line’ and could cause their pets distress.

But when the presenters jokingly asked whether her English Bull Terrier Prudence was ‘comfortable’ with this picture, the expert brushed it off, saying Prudence ‘loves the lens’. 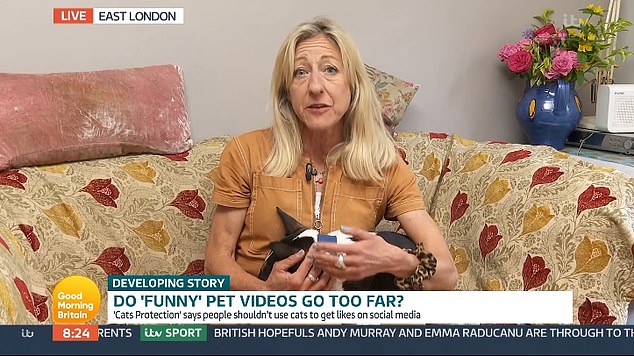 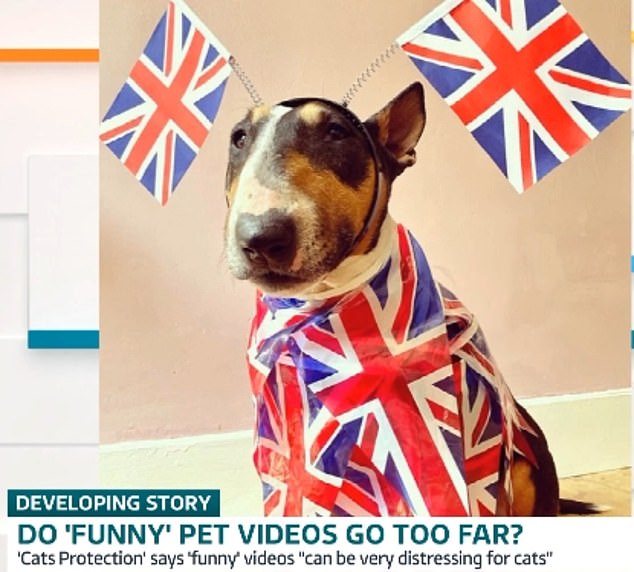 Anna Webb, an East London-based expert, was left red-cheeked after Susanna Reid called her out for the snaps on today’s show, which showed her English Bull Terrier wrapped in the flags for the Queen’s Jubilee earlier this month

Viewers took to Twitter as they called Anna out for the double standard, saying she contradicted her previous statements about animal dignity.

This comes as the Cats Protection League voiced concerns against funny social video centered around pets, saying they could be distressing for the animals.

Anna was discussing the Cats Protection League’s warning on the show.

She said: ‘I do think they triviliase pet ownership at times, there is a line that is being crossed.’ 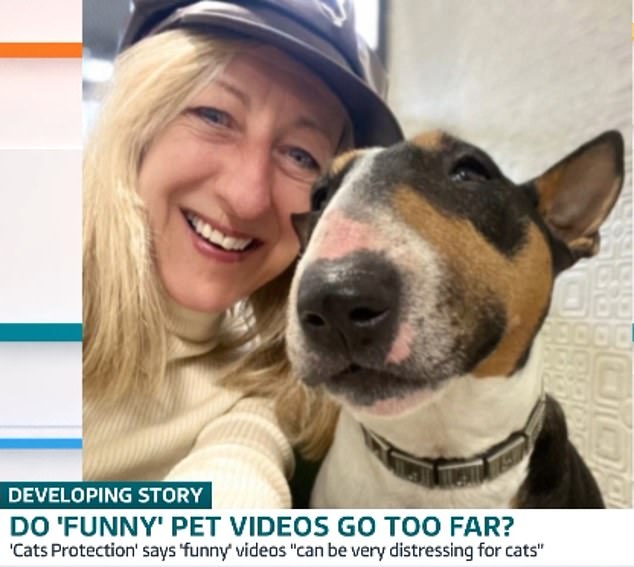 The pet lover, who owns two dogs and a cat, had just been arguing against using animal pictures for likes, and stressed the importance of respecting the pet’s dignity, as she said some owners were ‘crossing a line’ and could cause their pets distressed 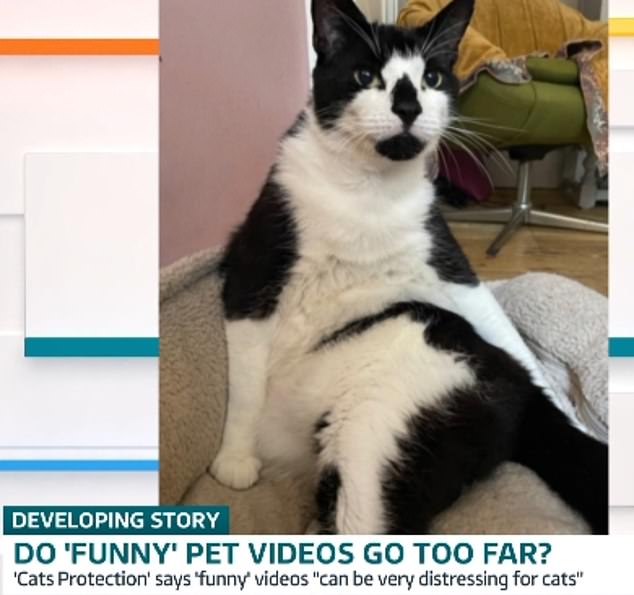 Anna’s cat Gremlin, pictured, has an agent and has appeared in campaigns for animal charities, it was revealed on the show

While she admitted she took pictures of her dog Prudence, she added these were ‘artistic pictures’ and ‘educational’ snaps that were ‘giving the best life to my pets.’

She later said: ‘What the pandemic has done is create a lot of pet ownership that’s been promoted and encouraged through social media now, for good and for bad.’

She said people need to understand that ‘pets are revered creatures’.

‘I really believe they need to be treated as such and not a cheap circus act,’ she added.

She added that while taking a picture of your dog whilst training is ‘a great opportunity, we mustn’t think dog are little people. 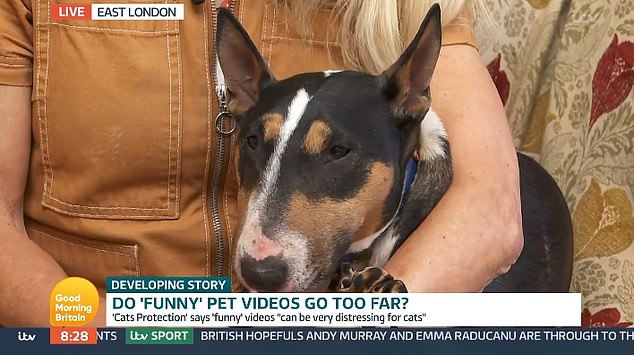 Anna said her dog Prudence ‘joins in’ on the pictures, ‘takes it in her stride’ and ‘love the lens’ after arguing against using pets for social media likes 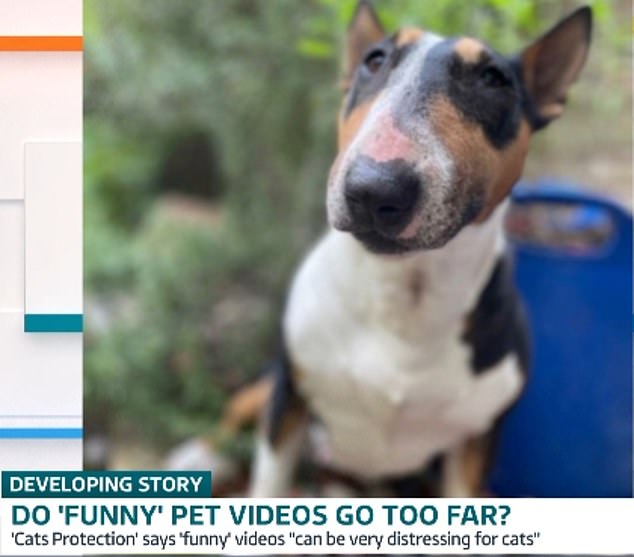 Anna said her pictures of Prudence are ‘artistic’ and ‘educational.’ She said pets should not be used as ‘cheap circus acts’ 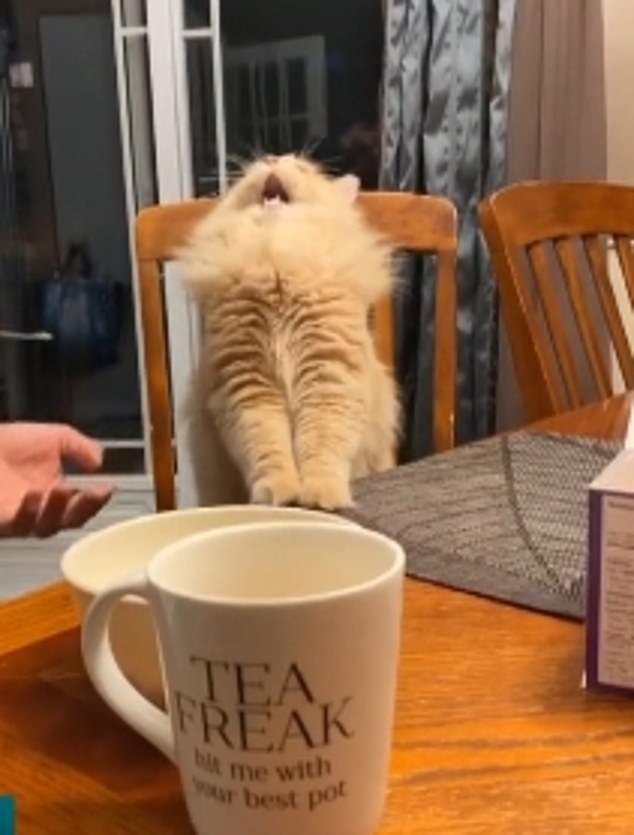 The Cats Protection League has warned against video of pets on social media, saying some pets might be distressed if they’re being made to perform

‘Dogs are dogs are thanks heaven for that.’

As she made her point, several pictures of her dog Prudence were shown on the screen, including one were the dog was dressed in an Union Jack, with two small flags poking out from behind her ears.

Susanna, immediately called Anna out for the photo, asking the expert how she could know whether her dog was comfortable with her pictures or not.

‘Prudence joins in, she loves posing for the camera,’ Anna explained.

‘We’re blessed with a cameraman here in my tiny living room and, she’s taking all this in her stride, she loves the lens,’ she added.

Susanna also pointed out that Anna’s cat, Gremlin, has his own agent, however, the expert said he had only participated in campaigns for cat charities in order to educate people on how to properly care for and play with a cat.

Susanna poked Anna further, pointed out the cat could get paid for such campaigns and asked whether the expert was ‘exploiting’ her pets ‘for pounds’ instead of likes.’

But the expert replies she is treating her pets with the dignity they deserve.

Pet agent Loni Edwards, who is based in Chicago, was defending the counter argument in the debate, saying that ‘as a pet owner you know your pet’.

She said: ‘You know what they’re okay with, happy or stressed, it is your responsibility to make sure your pet is not doing uncomfortable things,’ she said.

She added performing tricks with your pet can also be great ‘mental stimulation’ when ‘done properly.’

She also added: ‘The pets don’t know what social media is. They’re not worried about videos being on the internet, they like getting treats, getting the reward and the praise.

‘As long as it’s done right, there truly is no harm,’ she concluded.

Viewers called Anna a hypocrite and said she had contradicted everything she said earlier.

‘This Anna woman has just contradicted everything she says she’s standing for. Absolute mess. She should be embarrassed,’ one said.

However, one person said there was a difference between dressing a pet up and filming them incessantly.

‘Big difference between dressing a dog up and doing tricks for likes. Pet might be in distress. Wonder how many takes they do to get the perfect video. Pets aren’t there to perform for likes.’